Bigg Boss 15: Tina Datta picks THIS contestant as the winner of the season

Bigg Boss season 15 has finally managed to grab attention with fights between the contestants.

Bigg Boss season 15 has finally managed to grab attention with fights between the contestants. Recently, during the press conference, contestant Jay Bhanushali revealed how his time invested in friendships inside the house was a waste. Since day one, Jay is trying his level best to up his game, but he has been unable to impress audiences with his strategy. Also Read - Bigg Boss 15, Day 67, Live Updates: Tejasswi Prakash and Karan Kundrra try to sort their differences, Rakhi Sawant is prepared to be betrayed

Recently, everyone was taken aback by surprise, when Jay was not part of the top five contestants list of the media. Jay himself was shocked that his name did not appear on the list. Jay's friend and popular actress Tina Datta have come out in support of him. She took to her social media and gave reasons on why she feels Jay deserves to win the show. Also Read - Bigg Boss 15: 'It's not working out'; Karan Kundrra BREAKS UP with Tejasswi Prakash over Ticket to Finale task? WATCH

She shared a picture of Jay on her Instagram story and wrote a note wherein she expressed her strong opinions. Her note read, “Jay is a star. Loving the way he is carrying himself with grace and confidence in the house. Speaks sense and doesn't wander for unnecessary footage. He exhibits winning qualities and I so want him to win this season. Much deserving.” Also Read - Trending TV News Today: Ankita Lokhande injured ahead of wedding with Vicky Jain, Vishal Kotian to return on Bigg Boss 15, Neil Bhatt celebrates Aishwarya Sharma's birthday and more 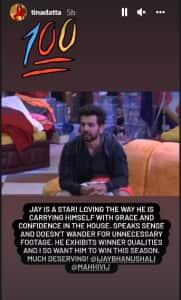 Earlier Jay's wife Mahhi Vij came out in support of her husband and shared a cryptic note. She wrote, “People may destroy your image, stain your personality but they cannot take away your good deeds because no matter how they describe you, you’ll still be admired by those who know you really better.”

What do you think, should Jay deserves to be in top 5? Stay tuned for more updates on Bigg Boss 15.