Indian Idol 12: SHOCKING! Fans want this contestant to get eliminated in the semi-finals - view poll results

The singing reality shows Indian Idol season 12 will gets its winner on August 15. This year's Indian Idol 12 has always been around controversies and managed to gain good TRPs. The grand finale of Indian Idol 12 will air for 12 hours straight. The show has finally got its top 6 contestants of this season including Pawandeep Rajan, Arunita Kanjilal, Sayli Kamble, Nihal Tauro, Shanmukhapriya, and Mohd Danish. Also Read - Trending TV News Today: Shaheer Sheikh opens up on the time he was jobless before Mahabharat; Karan Kundrra approached for Salman Khan's Bigg Boss 15 and more

In the upcoming weekend episode, viewers will get their top 5 contestants who will then fight for the trophy in the grand finale. The semi finale of Indian Idol 12 will be judged by famous filmmaker Karan Johar who will grace the show with his presence. The contestants will celebrate 'Karan Johar special episode and sing songs from his super hit films. Also Read - Indian Idol 12 is over but Pawandeep Rajan and Arunita Kanjilal's magical chemistry is still intact; these BTS pics are proof

Well, recently we had asked Indian Idol 12 fans who they think would be getting eliminated amongst Pawandeep Rajan, Arunita Kanjilal, Sayli Kamble, Nihal Tauro, Shanmukhapriya, and Mohd Danish just before the finale. Mohd Danish got the highest vote and got 32%, while Nihal Tauro got 28%. But Shanmukhapriya got 21%, Sayli Kamble got 8%, Arunita got 3% and Pawandeep got 8%. Also Read - O Saiyyonii song out: Pawandeep Rajan and Arunita Kanjilal's sweet chemistry is unmissable – watch

Take a look at the result: 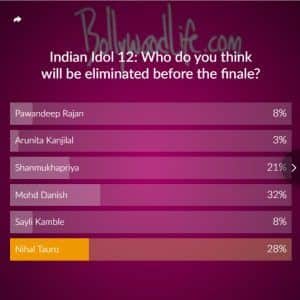 Well, according to these results it seems as fans want Mohd Danish to get eliminated next. What are your thoughts on it? Stay tuned for more updates on Indian Idol 12.