Varun Dhawan's Judwaa 2 brought some respite for Bollywood by ending the very poor third quarter on a high. The trade (exhibitors and distributors) is now heaving a sigh of relief and is much more stable after recovering a considerable chunk of their losses from Judwaa 2's super success. However, all eyes are now on the fourth quarter of 2017. With huge films like Aamir Khan's Secret Superstar, Ajay Devgn's Golmaal Again, Ranveer Singh - Deepika Padukone's Padmavati and Salman Khan's Tiger Zinda Hai, the trade is really excited with the fact that they might just end the year on a fantastic note. In fact, with Tiger Zinda Hai releasing of December 22, we are sure it will continue its magnificent run during the first two weeks of January 2018 too, thereby also giving the first quarter of 2018 a remarkable boost. Also Read - Kareena Kapoor Khan gives a glimpse of her 'special' birthday celebrations and the promise she has made to herself

While several critics will argue that various big films have not lived up to the mark this year and these four also look dicey, let us tell you that the buzz around all these films and the fact that each one of them has a mass, pan - India appeal, will help them enjoy a phenomenal run at the domestic box office. And the best part is that Ajay Devgn's Golmaal Again and Aamir Khan's Secret Superstar will kick start the fourth quarter of 2017 with a BANG this week. How? Well read our full box office analysis right here to know more. (ALSO READ - Movies This Week: Golmaal Again, Secret Superstar) Also Read - When Samantha Ruth Prabhu called Naga Chaitanya 'completely husband material' and confessed he fell in love with the actress despite seeing her make ‘horrible mistakes’

Ajay Devgn's Golmaal Again and Aamir Khan's Secret Superstar release during this Diwali weekend, which will, in itself, help them significantly. Every Diwali we see one or two films release and rule the box office. Not only is the holiday season during Diwali beneficial for getting a much larger audience into the theatres, but also the fact that both these films release on a long weekend, will help Secret Superstar and Golmaal Again rake in a large amount of moolah. Also Read - Amid divorce rumours with Naga Chaitanya, Samantha Ruth Prabhu to move to Mumbai soon?

If you see over the last five years, no individual film has raked in less than Rs 100 crore at the box office. In fact, be it Happy New Year (Rs 203 crore) in 2014, Prem Ratan Dhan Payo (Rs 210.16 crore) in 2015 and Ae Dil Hai Mushkil (Rs 112.48 crore) - Shivaay (Rs 100.33 crore) in 2016, every film has cumulatively raked in Rs 200 crore plus at the box office every year. So we expect Golmaal Again and Secret Superstar to cumulatively rake in more than Rs 200 crore in their lifetime run, which would give the trade a much needed boost and a reason to celebrate.

Generally, when two films clash at the box office, especially during Diwali, their openings are affected, right? Well, a majority of the Indian population might not be able to see both the films because of time constraint. When two big films release on the same day, the audience is divided and has to pick one over the other even if they have the money to see both the movies. However, the teams of Secret Superstar and Golmaal Again have a smart release strategy.

While Secret Superstar releases on October 19 (Thursday), Golmaal Again is set to hit the screens on October 20(Friday). With a gap of one day in between them and with a long weekend ahead, we are sure both the films will get fantastic openings. According to our estimates, Secret Superstar should make Rs 30 - 50 crore over the first weekend, while Golmaal Again should collect Rs 70 - 90 crore on its opening weekend. This would be a fantastic start for both these films. And if you look at the weeks ahead, the movies have a free run till November 3, when Sidharth Malhotra and Sonakshi's Sinha's Ittefaq releases. This free run will enable Secret Superstar and Golmaal Again to enjoy an extended run and a larger audience to watch the film. This, in turn, will help both the films garner a better collection and it will surely be a magnificent Diwali treat for the trade. (ALSO READ - Aamir Khan's Secret Superstar and Ajay Devgn's Golmaal Again receive U/A certificates with a few cuts - read inside details)

Talking about the economics of both these films, let us tell you that Secret Superstar and Golmaal Again have been made on different budgets. While Aamir's film has been made on a limited budget of Rs 30 - 40 crore, Ajay's film has a budget of Rs 80 - 100 crore. With different strategies of release and a varied target audience, the films will rake in different amount of money. According to us, Golmaal Again should start off with a blast, earn a huge amount initially and then sustain decently over the first two weeks. Secret Superstar, on the other hand, would start off slowly, but grow over the lifetime run and rake in a fantastic amount of money. But all this only possible if both the movies good in terms of content. If that is the case, we expect Secret Superstar to earn Rs 70 - 100 crore (minimum amount) in its lifetime run and Golmaal Again to earn a bare minimum collection of Rs 150 - 200 by the end of its box office run. With that, we are sure both the films will make huge profits.

According to us, the team of Secret Superstar can easily make nearly Rs 100 crore in profit from theatrical collections and the sale of all the music and satellite rights. 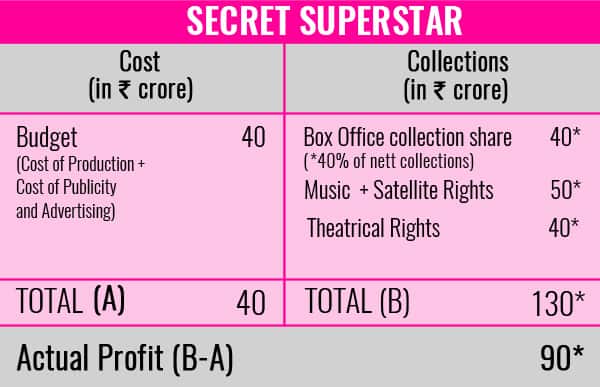 The Golmaal Again makers, on the other hand, should make Rs 150 crore in profit from the theatrical collections and sale of the music and satellite rights. 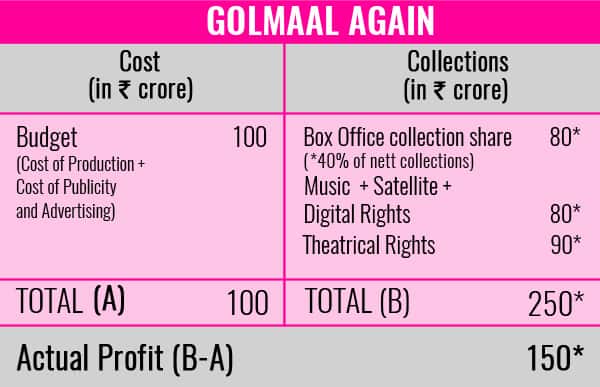 And even though the distribution cost for Golmaal Again (around about Rs 90 crore, 3000 - 3500 screens) and Secret Superstar (around about Rs 40 crore, 1500 - 2200 screens) is on the higher side, the trade might just make a huge profit. According to our estimate, they can easily earn Rs 50 crore in profits, which is fantastic to say the least. (ALSO READ - Forget Golmaal Again vs Secret Superstar clash, Aamir Khan shared a pic with Ajay Devgn as the duo indulged in PDA - view pic) 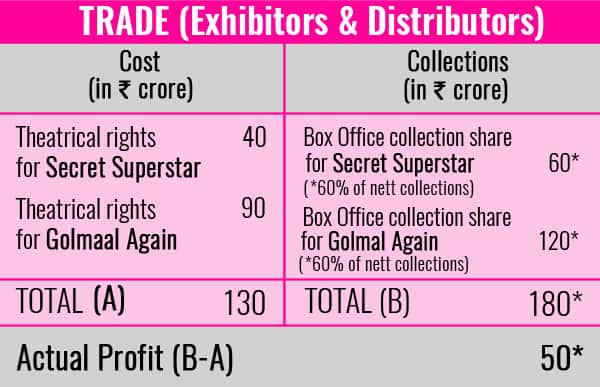 Not only will a good first week give the fourth quarter of 2017 a fantastic start, but will help give Bollywood and the trade a huge boost. Over the whole third quarter, the trade has been facing significant losses. But Judwaa 2, Golmaal Again and Secret Superstar will enable it to recover all their losses and post a remarkable profit too. Won't that be fantastic? With such a great start to the fourth quarter and after seeing quality of content on offer, we are sure the audience and the trade will forget about the lull period and be excited about Ranveer - Deepika's Padmavati and Salman's Tiger Zinda Hai. Once again, it will be proved that quality content will work at the box office and the filmmakers will focus on it more. This will help enhance the quality of the Bollywood industry too.

But before all this, Secret Superstar and Golmaal Again are going to kick off the Diwali festivities this week. Tell us which film are you more excited about in the poll above! In the meantime, also stay tuned to BollywoodLife as we get you all the dope about these two films right here!