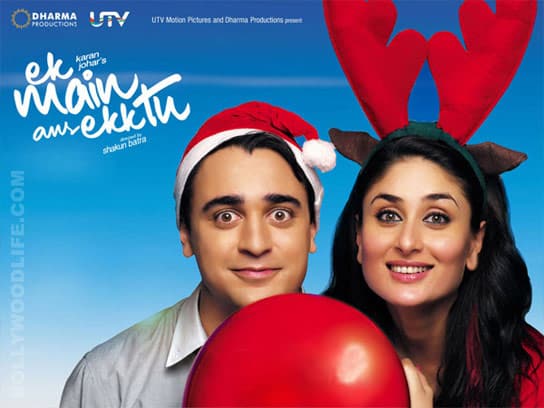 After enjoying a decent start at the box office, the Imran Khan-Kareena Kapoor romantic flick is looking forward to making the most of Valentine's Day on February 14

According to box office reports of Ek Main Aur Ekk Tu, it opened with a lukewarm response, netting only Rs 5 crore on Friday. The film picked up in the next two days, taking the figure to a decent Rs 12.5 crore over the weekend. We learn that the multiplex audience enjoyed the film but the response from single screens was not welcoming. Directed by Shakun Batra and produced by Karan Johar, EMAET marks Karan’s second successful outing of the year after his super hit film Agneepath which had collected whopping 23 crores on the opening day alone. Ek Main Aur Ekk Tu has bagged mixed reviews. While many liked Imran and Kareena's hatke chemistry in the film, some thought the film was too underplayed for their liking. Though it opened well at the overseas box office windows too, EMAET did not quite strike a chord with a traditional, single screen movie-goer in India. The production house spent Rs 30 crore on the making and the publicity of the film, but has already recovered Rs 15 crore from the satellite rights alone and another Rs 6 crore from the music rights. So whatever money the film is making now will only amount to profits. In the international market, which includes Britain, North America, Gulf and Australia, EMAET did an impressive job and went on to bag Rs 3.65 crore over the weekend. The makers are keeping their fingers crossed and hoping that Valentine's Day manages to boost the overall box office collections of the film. Also Read - Rahul in Darr, Gabbar in Sholay, Mogambo in Mr. India and more – 10 Bollywood movies where the villains are remembered more than the heroes