Exclusive! Deadpool received 7 cuts from the CBFC; but was Deadpool 2 an exception?

Did Ryan Reynolds' Deadpool 2 get a lot of cuts from the Central Board of Film Certification? Read exclusive details to find out!

Ryan Reynolds' Deadpool was one of the most interesting and hilarious Hollywood films that we have seen in India till date. However, several people, were disappointed that they could not see the original version of the film in the country. This was because of the fact that the anti-hero film got 7 major cuts from the Central Board of Film Certification. A lot of abuses, gestures, movements and scenes were cut. But has Deadpool 2 been an exception? Or did it also see several cuts like its prequel? Also Read - India's Most Wanted: CBFC chops off Bhagvad Gita and Quran reference from Arjun Kapoor's film

Our source exclusively reveals to us, "Deadpool 2 has got no cuts as such. A few words have been beeped out and nothing else. All the scenes have been retained, giving the viewers a better experience." From what we hear, a few cuss words have been beeped out or muted and the audience will not even understand it. Clearly, it's a good sign for the future and we expect all the films to retain most of their scenes, after all, cinema should have the freedom of expression, right? The film has also got an A certificate and is set to release across the world on May 15. In India, the movie is set to release in English, Hindi, Tamil and Telugu formats. How excited are you for this movie? Share with us your thoughts in the comments section below! (ALSO READ - Deadpool 2 movie review: The sequel is funnier, raunchier and a gruesome delight, according to top critics) Also Read - CBFC cuts THESE scenes from Keanu Reeve's John Wick: Chapter 3 – Parabellum and Twitter is not pleased - read tweets 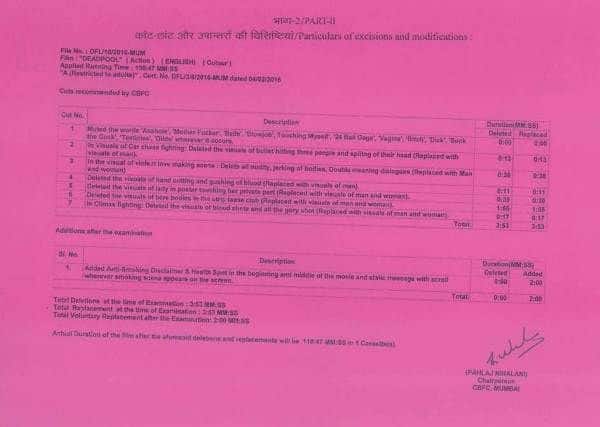 Also Read - 2.0: Lyca productions hits back at COAI’s objections on the films' theme

For those of you who don't know, the CBFC had suggested 7 cuts in Deadpool. From muting words like a*****e, m**********r, v****a to deleting visuals of bullets splitting people's heads to deleting several love making and nude scenes and double meaning dialogues; Deadpool saw a lot of its visual and audio cuts. Bloody fights were also removed. A lot of essence of several sequences were lost too. Anyway, with no cuts in Deadpool 2, we expect it to be a worthy watch. In the meantime, stay tuned to BollywoodLife as we get you all the dope and updates about Deadpool 2 right here