Shah Rukh Khan and Anushka Sharma's Jab Harry Met Sejal is one of the most anticipated films of the year and while everyone is eager to watch the film, looks like the wait for everyone in Dubai just got a little longer. Yes, Jab Harry Met Sejal's release in Dubai has been delayed. Usually, Bollywood films hit the screens in the Gulf countries on Thursday, however, Jab Harry Met Sejal did not release on Thursday morning (August 3). But don't worry as the delay in release is just by a few hours and the film will be released in Dubai at 6 pm today (August 3). In fact, this was actually a pre-planned strategy and we have all the exclusive details... Also Read - Not Virat Kohli but Anushka Sharma turned muse for THIS Bollywood actress in UK

A source close to the film revealed to us exclusively, "While Bollywood movies generally release in Dubai on Thursday mornings, the makers, along with Shah Rukh Khan, have decided to release Jab Harry Met Sejal directly in the evening today (August 3). They took this decision to keep the mystery around their film alive. After seeing the movie, usually people reveal the story, the spoilers, the reviews and the ending on social media. The Indian audience comes to know about everything and some tend to avoid seeing the movie after coming to know about the end. On top of it, pirated versions of the film are also released and hence, several people see the movie on their phones or at home than in the theatres. So to avoid all this and to maximise their viewership in India, the makers have taken this decision." (ALSO READ - This movie ticket for Shah Rukh Khan's Jab Harry Met Sejal is COSTLIER than your round trip airfare to Goa - view pics) Also Read - Deepika Padukone, Kareena Kapoor Khan, Anushka Sharma and more Bollywood beauties who went a little OTT with dramatic sleeves – view pics

We even got our validation when we checked the movie timings for Jab Harry Met Sejal in Dubai. We could not find even one show before 6 pm for Thursday (August 3). Check out the snapshot of the show timings right here: Also Read - Vanity vans of Kareena Kapoor Khan, Anushka Sharma, Katrina Kaif and more B-town beauties spell luxury and are more spacious than most city homes – view pics 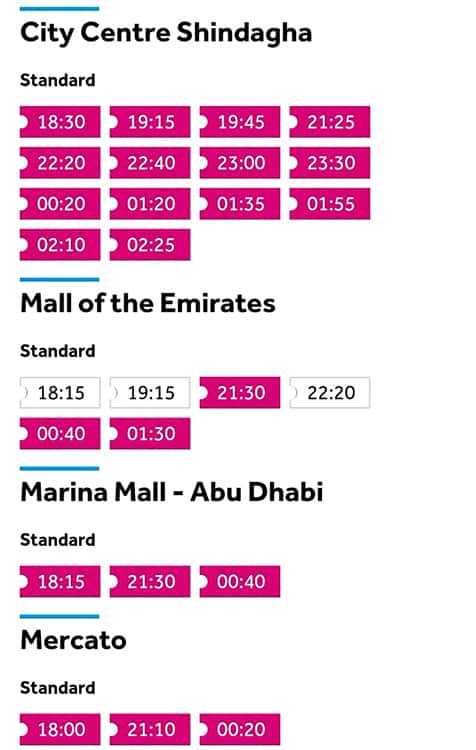 Directed by Imtiaz Ali, Jab Harry Met Sejal is the story of how Harry (Shah Rukh Khan) and Sejal (Anushka Sharma) fall in love with each other during a trip across Europe to find Sejal's missing engagement ring. Anyway, tell us how excited are you to see the movie in the comments section below! Also stay tuned to BollywoodLife as we get you all the dope on Jab Harry Met Sejal right here...