Relax Salman Khan fans, Tubelight is NOT a flop and we tell you why...

Is Salman Khan's Tubelight a FLOP at the box office? Here's the truth...

Is Salman Khan's Tubelight a flop? Several people have had this question in their mind ever since the film had a disappointing start at the box office. But let us tell you that it is definitely NOT a flop! Several people across the world, especially on social media, have being labelling it as a box office dud. However, we can tell you that this is an absolutely baseless and false assumption. In fact, we even have proof to prove everyone wrong. Our trade expert, Akshaye Rathi (exhibitor and distributor), also agrees with us, as he reveals, "It has been unfortunate that Tubelight has not lived up to all the hype and expectations that we all had from it. But, Tubelight is not at all a setback for Salman Khan. In fact, we can't even call Tubelight a failure as it has earned decent money!" Also Read - Tuesday Trivia: Did you know not Shah Rukh Khan but THIS Khan was the first choice for Chak De! India?

Let us also look at the numbers and let them do the talking! At the box office, Tubelight has raked in Rs 95.86 crore in five days. The producers get an approximate share of 50 per cent (Rs 48 crore) from these collections. Add to that the money that the makers made by selling the music rights, the theatrical rights and the satellite rights and you will realise that the movie has approximately Rs 250 crore already in its kitty. If you even subtract the budget of Tubelight (Rs 100 crore), the film still has a profit of Rs 150 crore, which is not a small number. So quite clearly, Tubelight is not a flop, but in fact, a profitable film! With the additional collections throughout this week and next weekend, Salman Khan's Eid release will have made a decent profit. (ALSO READ - Tubelight's disappointing run at the box office will have ZERO effect on Salman Khan's Tiger Zinda Hai, reveals trade expert) Also Read - Did you know Salman Khan's Bajrangi Bhaijaan is based on THIS Chiranjeevi blockbuster? Nephew Allu Sirish spills the beans [Exclusive] 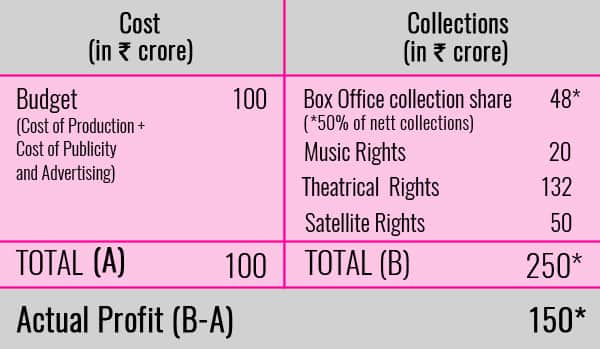 Directed by Kabir Khan, Tubelight talks about the emotional journey of a slow learning brother trying to find his elder sibling, who is trying to safeguard the country from an invasion. Though the subject was really good and Salman delivered a fantastic performance, the film has not appealed to the masses. This is because of the poor execution and the negative reviews. But there is nothing for the makers to worry about as Tubelight has made a decent profit already. (ALSO READ - SHOCKING! Salman Khan's Tubelight will not even make Rs 200 crore at the box office)

Anyway, tell us what you think about Tubelight's profit in the comments section below. Also, stay tuned to BollywoodLife as we get you all the latest details about the movie right here...