Akshay Kumar's Mission Mangal and John Abraham's Batla House are locking horns at the box office this Independence Day. With a public holiday today, the two films will surely rake in impressive collections. But this is not something new! Every year on Independence Day, be it the first day of release or day 5, Bollywood movies have always seen a huge growth. This is simply because of the fact that people crave for entertainment on holidays and what better than a fun-filled movie in an air conditioned theatre? Over the past few years, we have seen several big films hit the the theatres during this period, but which was the highest Independence Day grosser till date? Also Read - KGF Chapter 2, Shamshera and more: All you need to know about Sanjay Dutt’s upcoming films

It's none other than Salman Khan's Ek Tha Tiger, which had raked in a massive amount of Rs 32.93 crore on August 15, 2012. Ajay Devgn's Singham Returns (Rs 32.09 crore), Akshay Kumar's Gold (Rs 25.25 crore), Akshay and Sidharth Malhotra's Brothers (Rs 21.43 crore), and John Abraham's Satyameva Jayate (Rs 20.52 crore) follow ETT closely and make up the top 5 highest grossers of I-Day. We wonder where the latest releases - Mission Mangal and Batla House will slot in? What do you think? Also Read - Ajay Devgn's Rudra co-star Raashi Khanna possesses the deadly combo of glamour and style and these stunning pics prove that 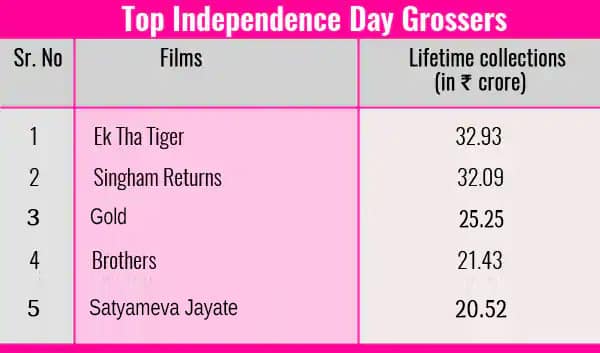 Looking at the buzz around Mission Mangal, we are hoping the film to collect minimum between Rs 23 to Rs 25 crore on its first day at the ticket windows. And if we see positive reviews pouring in for the film, we might get to see an even bigger collection at the box office. Coming to Batla House, it's a film, where an intense performer like John Abraham fits the bill perfectly. We are expecting the single screen audiences to cater in huge number for this film as it has a mass appeal like Satyameva Jayate. As per our predictions, it should earn between Rs 18 to Rs 20 crore, which is definitely a huge number for a film, which has competition from Akshay Kumar.

What do you think? Tweet to us @bollywood_life and let us know!