Varun Dhawan and Alia Bhatt's Badrinath Ki Dulhania crosses the lifetime collections of these five hits, that too in 7 days...

Varun Dhawan and Alia Bhatt's Badrinath Ki Dulhania has been having a fantastic run at the box office since it released on March 10. The movie has raked in Rs 73.66 crore in the first week, making it the jodi's highest opening week grosser ever. But apart from that, Badrinath Ki Dulhania has achieved another huge feat! Varun and Alia's film has now crossed the lifetime collections of Kapoor & Sons, Dishoom, Dear Zindagi, Pink and Befikre, and that too in just seven days. (ALSO READ - 5 records created by Varun Dhawan-Alia Bhatt's Badrinath Ki Dulhania you need to know RIGHT NOW!) Also Read - When Ananya Panday, Janhvi Kapoor, Sara Ali Khan and more young Bollywood divas left fans gasping for breath with their fiery hot bikini shots – view pics

If you compare the lifetime collections of each of the above films, you will realise what we are talking about. In fact, the best part is that all the five films were big hits last year and BKD has been able to beat them convincingly. For those of you who don't know, Fawad Khan-Sidharth Malhotra's Kapoor & Sons had raked in 73.29 crore, while John Abraham-Jacqueline Fernandez's Dishoom earned Rs 70 crore. This is way lesser than what Varun Dhawan and Alia Bhatt's Badrinath Ki Dulhania (Rs 73.66 crore) has collected at the box office. Shah Rukh Khan's Dear Zindagi (Rs 68.16 crore), Amitabh Bachchan's Pink (Rs 65.39 crore) and Ranveer Singh's Befikre (Rs 60.24 crore) have also been left behind by Badrinath. (ALSO READ - Varun Dhawan and Alia Bhatt's Badrinath Ki Dulhania beats the first week collections of Shah Rukh Khan's Fan, Ajay Devgn's Shivaay) Also Read - Trending Entertainment News Today: Raj Kundra breaks down as he returns home from jail; Malaika Arora BRUTALLY trolled for walking in a weird manner 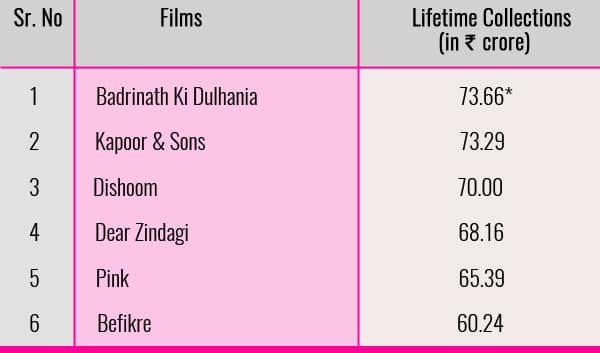 But all this has been possible only because of the fantastic content, tremendous pre-release buzz, hit songs, phenomenal performances by the actors and a great word-of-mouth publicity that Badrinath Ki Dulhania enjoyed. People are raving about the movie on social media even today. Check out the public reactions in the video right here:

With Trapped, Aa Gaya Hero and Machine hitting the screens today, people thought that Badrinath Ki Dulhania will be affected. However, let me tell you that it is not the case. We expect the movie to continue its magical run and end with a lifetime collection of Rs 100-110 crore. Till then, stay tuned to BollywoodLife as we get you all the latest box office updates about Badrinath Ki Dulhania right here...