Matin Rey Tangu and Salman Khan together is a deadly combo that will leave you in splits. 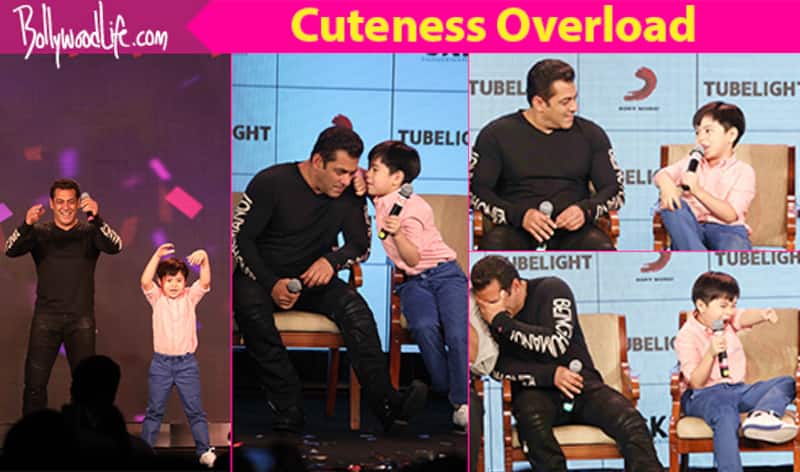 Salman Khan and babies is an awesome combination, but Matin Rey Tangu and Salman Khan together is a deadly combo that will leave you in splits. Recently Salman Khan introduced his little wonder Matin at an event. Kabir Khan quipped that they had saved the best for last. And indeed Matin is the best thing to happen to Tubelight, of course apart from Salman. At the event people simply couldn't take their eyes off this baby. Such was his charm and energy that even Salman Khan decided to take a backseat. It was very evident that the actor had taken a strong liking for the little boy. We could feel the strong bond between these two at this event and we can imagine what must have been the scene on sets. Also Read - Pathaan actor Shah Rukh Khan to Tiger 3 actress Katrina Kaif: WORST statements made by these Bollywood celebs will leave you shell-shocked

Here are five moments between Matin and Salman that we bet will make you go AWWW!!! Also Read - Bigg Boss 16: Rapper MC Stan walks out from Salman Khan's reality show in the first week?

#Unaware of stardom: Salman Khan and Matin danced like nobody was watching. In fact, Matin was so focused on his own dance moves that he didn't even pay heed to his superstar co-star and continued with his moves. And we must admit that for once we couldn't help but watch this little cutie pie. Also Read - Salman Khan in GodFather, Ajay Devgn in RRR and more Bollywood stars who did cameos in South movies

#Burrrp is okay: Matin hit it off in the very beginning of this event. As soon as the little boy came on stage and took the microphone he released a burp. Now we know in normal circumstances we would have cringed about it, but not when it's Matin. Salman was so amused with this act that even he couldn't hold a smile from escaping his lips...

#It's Matin NOT Martin: Matin did not spare anybody, not the journo who asked him if it was his first time in India and neither Sohail Khan who pronounced his name wrongly. The kiddo went on to give Salman's little brother a good lesson and even spelt out his name for him. Sohail of course took it in good spirit and was seen laughing and turning pink with embarrassment.

#Shitty talks: So, Mr Matin ended up mispronouncing his own name. And he couldn't refrain himself from joking about it. When Matin was trying to correct Salman about his surname, he unknowingly said "GOO", of course the child decided to revisit his own goof up and what followed was simply hilarious.

#Stupic jokes: Matin was not just full of energy, he was also full of PJ's. The kid got everybody to share a little joke and turned the press con into a stand up comedy event. While Kabir surrendered and revealed how he was done with all the jokes, Salman took help from his young co-star. Matin obviously took the due credit.

Here take a look at this fun and super funny duo...


Tubelight is all set to release on June 23. The film marks debut of not just Matin Rey Tangu, but also Chinese actress Zhu Zhu.