We are always eager to see fresh pairings on TV. It is not that we don't like favourite jodis like Dheeraj Dhoopar-Shraddha Arya, Shabbir Ahluwalia-Sriti Jha, who are topping BARC India's TRP charts with their shows. But it is always a delight to see something new and get floored by them. Thankfully, this year, 2018, started with a great note as we saw some new pairs entertaining the fans with their sparkling onscreen chemistry. While Ashish and Sonarika have a fierce onscreen chemistry, Suhasi Dhami and Karan Jotwani portrayed an unconventional romantic jodi. On the other hand, Jennifer Winget and Harshad Chopra both made their comeback on TV with Bepannaah. And this out-of-the-box concept of infidelity has already grabbed a place in everyone's heart. Namit Khanna and Palak Jain both made their debut on small screen with Yeh Pyaar Nahi Toh Kya Hai and we were floored by their onscreen chemistry. Ishq Subhan Allah jodi - Eisha Singh and Adnan Khan also left us with no complaints. Thus we organised a poll to get help from you to choose the best jodi of the first quarter of 2018. Well, the results are here and the jodi, who won the poll is Bepannaah's Harshad Chopra and Jennifer Winget. This jodi has beaten the others to become the best amongst all in this first quarter. Also Read - #BLBestof3: Vicky Kaushal's 'How's the josh?' beats Alia Bhatt's 'Dhoptungi' to become the best dialogue

With a whopping 62 per cent votes, the duo has been chosen as the best till now by you all for their show, Bepannaah. Breaking the regular daily soap rut, the show deals with infidelity and how two individuals embark on a journey to find out a mystery. Among all the drama, their sparkling chemistry wooed everyone. After being a villain, Jennifer's complete transformation as a sweet housewife and Harshad's comeback after almost three years has been accepted well by you all. They have been starring together for the first time and have impressed everyone with their unique chemistry. If they stay consistent, you might see them bagging many awards.

Also Read - Anil Kapoor is overwhelmed on winning the Best Jodi poll with Madhuri Dixit, thanks fans for 'all the love' over 33 years 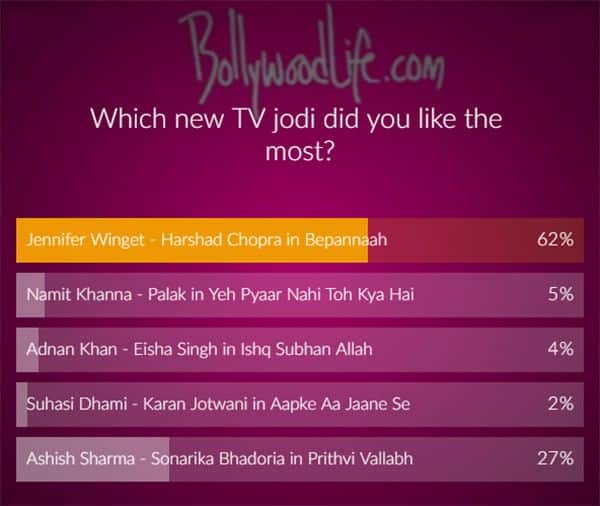