And Jennifer Winget fans have all the reasons to rejoice

The first quarter of the year is almost over and we can only say that it was full of surprises when we talk about the TV celebs. The fantastic performances from these actresses of the telly world not only made us speechless but also made it hard to pick the best from among them. So we conducted a poll and asked you all to help us pick the best actress of the first quarter of 2018. Finally, the results are here... And Jennifer Winget fans have all the reasons to rejoice. The actress has beaten Sonarika Bhadoria, Eisha Singh, Barkha Bisht and Krystle D'Souza to become the best actress of the first quarter of this year. 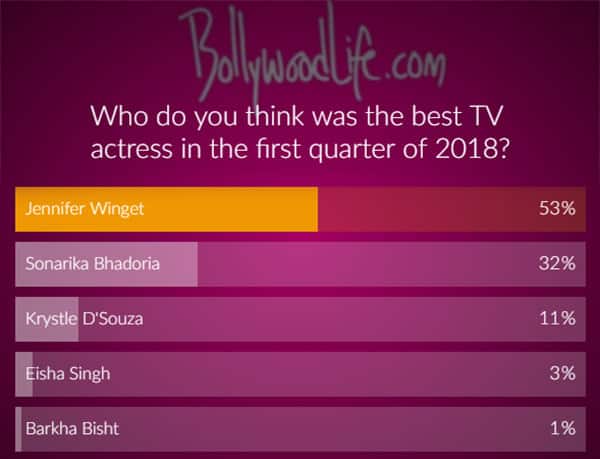 With a whopping 53 per cent of votes, you chose Jennifer as the best actress of the first quarter of 2018 for her outstanding performance in Bepannaah. The actress, who shed her deadly villainous avatar from Beyhadh to become a sweet and demure lady in her current role of Zoya in Bepannaah, bowled us right from the beginning of the show. She is already garnering accolades despite the show having started only a few weeks ago. In fact, with her ongoing performance, we expect Jennifer to sweep away all the awards this year. Also Read - Yeh Rishta Kya Kehlata Hai's Pranali Rathod to Bepannaah's Jennifer Winget — 5 actresses Harshad Chopda sizzled with on screen

Sonarika earned the second position with 32 per cent of votes. Coming to Krystle, the Belan Wali Bahu actress scored 11 per cent of votes which indicates that her comedy stint is failing to tickle funny bones. On the other hand, Eisha got only 3 per cent votes and Barkha came last with only 1 per cent votes. With this result, we can understand that despite their brilliant performances, the audience failed to strike a chord with them.