Can Katrina Kaif patch up Shahrukh and Salman Khan? 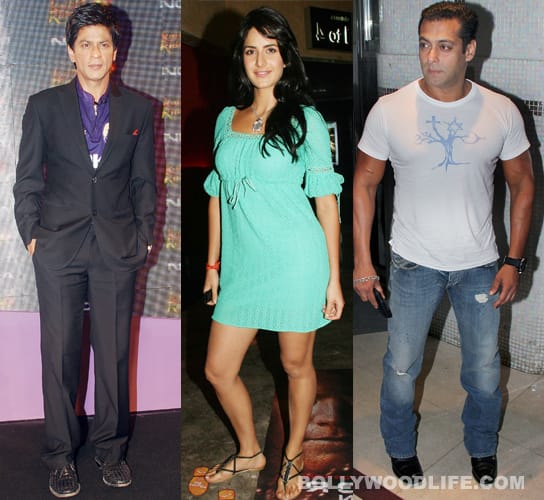 With news of Kat getting close to SRK in London trickling in, it seems this miracle just might occur

The latest buzz about Yash Chopra’s film is that its lead actors Katrina Kaif and Shahrukh Khan are getting quite friendly with each other in London. They had flown down to the British capital a couple of weeks ago to shoot for the film. All of us know how special Katrina Kaif and Salman Khan are to each other. The two friends-turned-lovers-turned-friends have never denied their close relationship. It came as quite a surprise to hear that Katrina signed a film with Salman’s rival Shahrukh Khan. That didn’t dent the friendship between Kat and Sallu, but gossip mongers are now wondering if this new buzz will do the trick. Insiders claim that when they are not required in front of the camera, Katrina and Shahrukh happily make the other strike poses and then they click photographs of each other. Their offscreen bonding continued at the suburb of Southbank, where they performed some funny antics. Also Read - Throwback: When Tiger Shroff spoke about the ‘worst’ phase of his life and revealed he had to sleep on the floor

SRK is known to be a charmer with all his leading ladies – whether it was Juhi Chawla, Kajol, Madhuri Dixit, Rani Mukerji or more recently, Priyanka Chopra. So we don’t doubt that the two are having a great time. (Though it makes us wonder where that left Anushka Sharma. Alone in her hotel room?) Anyway, if Kat and SRK are bonding so well, maybe she’ll get him and Sallu to become friends again. Salman has often said that he’ll never patch up with Shahrukh, but if there’s one person who can make him change his mind, it’s Katrina. Why not? The fight that caused the rift happened at her birthday party. If she makes the two Khans friends again, she would have wrought a miracle that her fans and fans of Salman and Shahrukh will thank her for, and which will make her a powerful member of the fraternity. Many filmmakers who want to cast them together will get another chance to fulfill their dreams. Kat will also start working with Aamir Khan in a few months for Dhoom 3. Getting him to patch up with SRK too would be too ambitious; we’ll be happy with just Sallu and SRK for starters. Wot say, Kat? Also Read - Trending Entertainment News Today – Emraan Hashmi's entry sequence in Tiger 3 to cost a bomb; Will Pawandeep Rajan get eliminated this week from Indian Idol 12?