CONFIRMED! Ranveer Singh and Shahid Kapoor to BATTLE it out for Deepika Padukone in Padmavati!

Ranveer Singh, Deepika Padukone and Shahid Kapoor have been finalised for Padmavati FINALLY...

Finally ace director Sanjay Leela Bhansali has locked the cast of his next film...

These past few days, reports after reports suggested that Ranveer Singh has walked out of Sanjay Leela Bhansali's Padmavati. The reports revealed that Shahid Kapoor's casting was the main reason for his decision to leave the film, however looks like things have changed and Ranveer has agreed to come on board for the film. This has been confirmed Ajay Kumar who is the costume designer for the film. Also Read - Bollywood's top actresses who almost went nude for the sexiest photoshoot ever – view pics

He posted a throwback picture of Sanjay Leela Bhansali and Ranveer Singh with the caption, "Some #rare pictures of #slb n #ranveersingh in the memories of #Ramleela !!! #bhansali sir is ready for the pose while he is unaware of the background n his #frame is not cleared yet. It's #hetrick #combo for #Padmavati and off course for #me too." Also Read - Deepika Padukone, Samantha Ruth Prabhu, Hrithik Roshan and other Top celebrities who have suffered from severe health issues

'A hattrick combo for Padmavati' gives out the confirmation, right? The post however has been deleted now (obviously he must have been told to delete it)! But fear not, we have a screenshot of it, check it out below! So, Shahid Kapoor and Ranveer Singh will now battle it out for Deepika Padukone in Sanjay Leela Bhansali's Padmavati... Deepika Padukone will be seen playing Rani Padmavati, while Shahid will play her husband - Raja Raval Ratan Singh and Ranveer Singh will play Allauddin Khilji. According to the folklore, Ranveer falls madly in love with Deepika in Padmavati and wages a war with Shahid for her. When DP sees that her husband is going to lose, she kills herself so that Ranveer can't capture her. Also Read - WTF Wednesday: ‘Are you pregnant?’ Dear fans, stop asking women in Bollywood and TV this cliché question

Earlier, sources told us that Ranveer felt betrayed by Sanjay Leela Bhansali when the buzz started doing rounds that SLB had promised Shahid a meatier role in the film during their closed door meeting. This was the Udta Punjab actor's only condition for accepting the role of Deepika Padukone’s husband. But this caused a lot of strain in SLB and Ranveer's relationship.

Deepika didn't want any TV star or a new actor (like Vicky Kaushal who was supposed to play the part) as her husband and so the Bajirao Mastani film-maker had to take Shahid on board. The actress has a lot of intimate scenes with the Raja and that's the reason why she wasn’t willing to act opposite a lesser known star. Rumours suggested that Fawad Khan and Shah Rukh Khan were approached for the role too, but neither of them agreed to it coz King Raval Ratan Singh’s role isn’t that prominent as the other two.

Reports even suggested that Ranveer took a Swiss vacation amidst the Padmavati prep sessions coz he was angry at Bhansali. However, looks like the actor and director have cooled down and cleared their issues! Ranveer has finally signed up for the film and with this, we can safely say that Shahid Kapoor, Ranveer Singh and Deepika Padukone will be seen in Padmavati! What do you guys think about this latest update on Padmavati? Tell us in the comments section below! Also check out the costume designer's post screenshot right here: 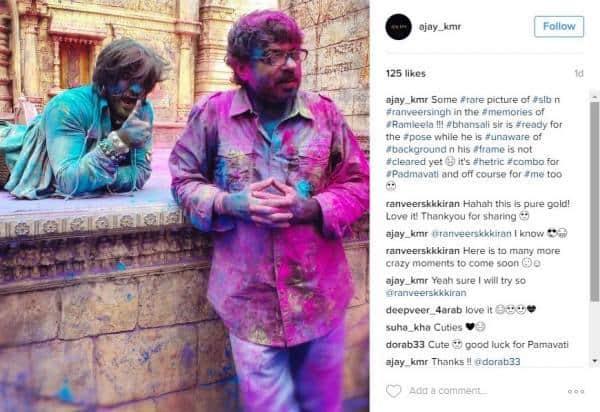