The results are here...

Since Ekta Kapoor declared the reboot of Kasautii Zindagii Kay 2, fans have gone crazy. After much speculation about who will play Prerna, Erica Fernandes' pictures from the promo shoot went viral and fans couldn't stop rejoicing. While Erica will be making her comeback with this daily soap, Parth Samthaan is also making his comeback to the small screen. He will be seen as Anurag Basu in the show. After a lot of speculations, Parth's name was confirmed when his pictures from another photoshoot with Erica went viral. While many loved his fresh, clean-shaven look, others criticised it as too childish and declared that he won't look good opposite Erica. So, to get an opinion, we conducted a poll and asked our readers to tell us if they liked Parth's look or no. Well, finally the results are here and fans have made their opinion very evident.

Kasautii Zindagii Kay 2: Erica Fernandes and Parth Samthaan's bong look will give you all the feels of Durga Puja 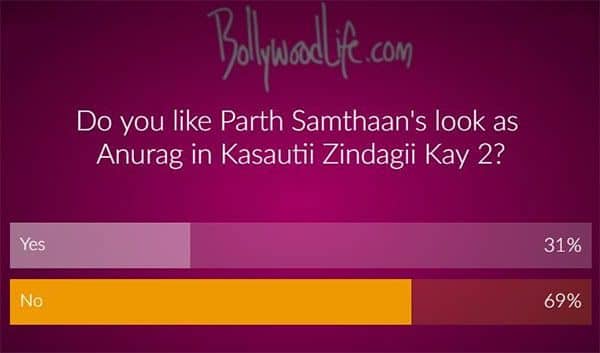 Fans have not at all liked this new look of Parth as Anurag. With a whopping 69 per cent votes, fans have rejected Parth's look. We do understand the emotions behind it as they are nostalgic about the previous Anurag and the way he looked. Only 31 per cent fans are happy with Parth's look. Now, we have to wait and watch if Ekta hears this plea and brings about some changes or not. Whatever be it, it will be surely interesting to see Parth in the role of Anurag. Also Read - Kasautii Zindagii Kay's Aamna Sharif is a perfect mixture of HOTNESS and elegance in her latest pictures