Everything you wanted to know about 'Shootout at Wadala'…well, almost! 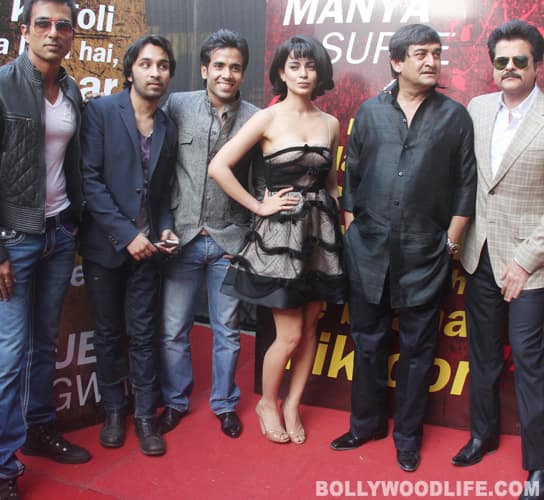 At the grand launch event of the John Abraham-Tusshar Kapoor-Kangna Ranaut starrer, the makers revealed almost everything there was to know about their movie

Starting with the invitation to the launch of Sanjay Gupta’s comeback film as a director, Shootout at Wadala, everything was impressive. The invite, which resembled an official summons from the police commissioner, got the makers in trouble because it had the national emblem on it. We heard that a FIR was filed against Gupta, but he later clarified that they had sorted it out with the top cops. (come back here for updates on this) Also Read - Trending Entertainment News Today: Anil Kapoor answers when will Salman Khan get married; Janhvi Kapoor says 'I Love You' to wish Akshat Rajan on his birthday

The event began with the deafening round of bullets being fired, explosions and the cacophony that ensues at places where shootouts happen. Soon after, the entire cast (but for Manoj Bajpai), John Abraham, who plays Manya Surve, Tusshar Kapoor, his partner in crime Sheik Munir, Kangna Ranaut who plays Vidya and the cops played by Anil Kapoor, Mahesh Manjrekar, Ronit Roy and Sonu Sood who plays Dawood Ibrahim Kaskar, were introduced by director Gupta. Also Read - 'When will Salman Khan get married?' Anil Kapoor's reply to Arbaaz Khan's billion-dollar question will break your heart

When we asked Gupta why he is making Shootout at Wadala, especially because the format will be similar to that of Shootout At Lokhandwala - the gangsters will die in the end, the cops will be hailed as the saviours of the society, et al - he didn’t have a satisfactory answer. He insisted that it was not about how the film ends, but about the journey of the characters. Tusshar jumped in to explain that all the gangsters will not die in this film. Also Read - Trending Entertainment News Today: Kareena Kapoor Khan breaks silence on hiking fee to play Sita; Anil Kapoor's response to troll calling him and Sonam Kapoor 'shameless' and more

Lead antagonist John Abraham seemed very uncomfortable when a journo asked him whether he will be able to take over the moniker of ‘Don’ from Shahrukh Khan. He tried hard to convince those present how hard he has researched for his role as the dreaded don Manya Surve. He talked about his meetings with the kith and kin of the dead gangster and how he tried to pick his mannerisms and the colloquial Marathi in which he spoke. He then undid all that he had said by adding that at the end of the day it was a regular Hindi film and the Marathi bits would not be accentuated.

Kangna wasn’t spared either; she was asked why she plays the role of a gangster’s moll in every other film. She didn’t have much to say to that and, to add insult to injury she was reminded that her role in the film would be decorative, as it belonged to the men. She responded by asking what the harm was in doing such a role.

The music of the film has all the Gupta regulars: Anand Raj Anand, Shibani Kashyap, Strings et al, with two more composers making their debut. Gupta made a tall claim at the event saying that his film will have the ‘baap’ of all item numbers, but chose to reveal details at a later date. The dialogue is in the league of Once Upon a Time in Mumbaai and has been written by Milap Zaveri.

We are interested in knowing more about the item song of Shootout at Wadala, since the rest is been-there- seen-that, as far as we are concerned. Tell us more, Mr Gupta!