While Erica Fernandes and Parth Samthaan have been confirmed for the role of Prerna and Anurag respectively, the makers haven't announced as to who will be playing the role of Mr Bajaj yet

Ekta Kapoor created a huge buzz when she declared that she will be coming up with a reboot version of her epic love saga, Kasautii Zindagii Kay. Instantly, fans wanted to know as to who will step into the shoes of those iconic characters. While the story is about Anurag and Prerna, the character of Mr Bajaj is as important as theirs. Without him, the story wouldn't be ever possible. He acted as a catalyst and brought some huge twists and turns in the show. While Erica Fernandes and Parth Samthaan have been confirmed for the role of Prerna and Anurag respectively, the makers haven't announced as to who will be playing the role of Mr Bajaj yet. The name that was doing the rounds was that of Iss Pyaar Ko Kya Naam Doon? actor, Barun Sobti. The actor turned 34 recently and we had conducted a poll on the occasion of his birthday to know if his fans were eager to see him in the coveted role or not. And guess what they think? 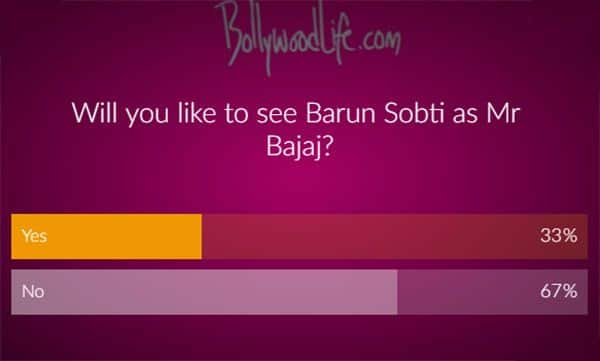 Also Read - Trending OTT News Today: The Family Man 2 gets a thumbs-up from audience; Asur 2 all set to release, The White Lotus trailer promises a dark but fun ride

With a whopping 67 per cent votes, fans have advised Barun to not play Mr Bajaj. While the actor has mass appeal, a charismatic screen presence and the personality of a business tycoon, fans perhaps don't want to see him play a character with shades of grey. Only 33 per cent of his fans are eager for his return in Kasautii Zindagii Kay 2. Though the actor has denied having any involvement in the show, we wonder who will be playing Mr Bajaj. Also Read - Pavitra Rishta 2: Harshad Chopda, Sehban Azim, Barun Sobti – which TV actor do you wish to see opposite Ankita Lokhande in the show? Vote now