Is Shahrukh Khan overdoing it for ‘RA.One’? 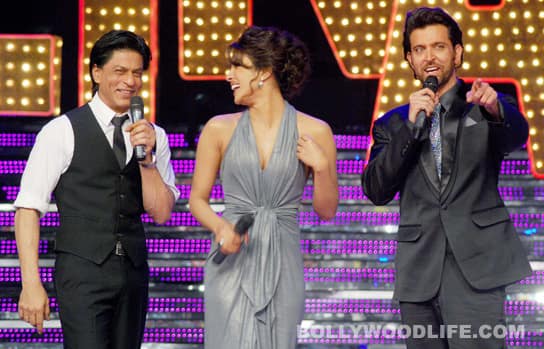 The actor has been promoting his ambitious film in every event and TV show he can manage. Is that a sign of desperation?

Was there an overdose of Shahrukh Khan on television on Saturday night? Add to that the omnipresence of RA.One and G.One and the superstar is everywhere, all the time. SRK was seen on the grand finale episodes of not one, but three reality shows. Fans could choose from his recorded show with buddy Hrithik Roshan and frenemy Farah Khan on Just Dance, or with Dharmendra and Sonali Bendre on India's Got Talent 3, or the ‘live from Surat’ finale of the much loved Sa Re Ga Ma Pa Li'l Champs. While he was all cute and played mentor to the kids on Li’l Champs, hugging and encouraging them and giving out G.One dolls, in the end his jig to Chammak Challo left hosts Manish Paul and Jai as well as the judges Kailash Kher, Javed Ali and Adnan Sami, exasperated. On Just Dance and India’s Got Talent, he was charming as ever, danced and had fun. But honestly, even for his biggest fans, it was indeed an OD of the Khan man. If you have a sharp memory, you may recall that SRK had done the same thing with the promotions of Om Shanti Om. The film went on to become a hit. But the same cannot be said about the actor’s 2000 film, Phir Bhi Dil Hain Hindustani. Before its release, Shahrukh and co-star-cum-business partner Juhi Chawla were seen giving interviews on every entertainment and music channel, even appearing in the same clothes in two different venues, betraying the fact that they were running pillar to post and shooting back to back. While releasing the first promo of RA.One, Shahrukh had informed the media that there would be at least one promotional activity for his sci-fi film every month leading up to its release. But seeing so many SRKs on the same day at different events....wethinks it was a bit too much. Surely only a superhero can do it! But sadly, all this makes it seem like Shahrukh is not confident of the success of his most ambitious baby and wants to plug it any and everywhere to ensure a good opening. Maybe SRK needs to take it a bit easy, or else people will be so tired of him that, leave alone RA.One, they wouldn’t even turn up to see his Don 2 which releases in December. God forbid, Khan sa'ab! See SRK pictures below Also Read - From Shehnaaz Gill to BTS' J-Hope: 5 celebs who rocked the platinum blonde hue to perfection