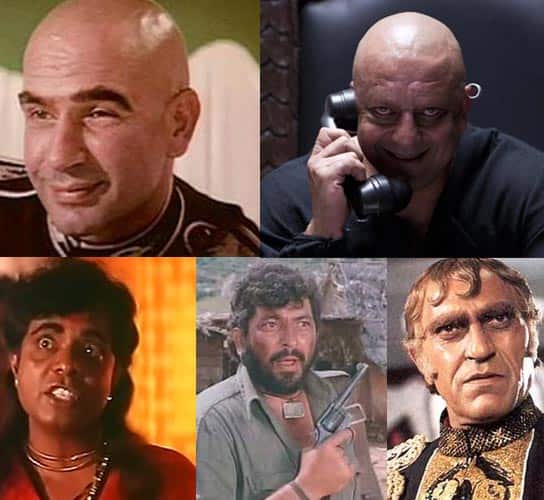 Bollywood's bad guys have better lines, better outfits, better babes, more gadgets and way more fun before they go out in the climax reel with a bang

Agneepath, the first success of 2012, firmly establishes the return of that Hindi movie staple—the villain. For almost two decades, the director trinity of Sooraj Barjatya, Karan Johar and Aditya Chopra, who championed family values and pretty people in love, had effectively banished the baddie from Bollywood. But Agneepath’s Kancha, played by a manically grinning Sanjay Dutt, a hairless man given to reciting the Gita as he hangs people, has brought the over-sized, over-wrought villain centrestage. Raavan is back (ironically, midwifed by the same Karan who had helped oust him). Also Read - Shamshera song Ji Huzoor: Ranbir Kapoor's dance wows fans but Aditya Narayan's vocals are the surprise package; netizens say, 'Outstanding' [Read Tweets]

I’ve always preferred the bad guys. Usually they have better lines, better outfits, better babes, more gadgets and way more fun before they go out in the climax reel with a bang. Here are some of my favourites: Also Read - Trending OTT News Today: Samrat Prithviraj to release on Amazon Prime on this date, The Lord of the Rings - The Rings of Power new teaser and more

Sukhi Lala in Mother India: Kanhaiyalal as the lecherous moneylender who grabs the grieving Radha even as she begs for food for her starving children is perfectly slimy. He’s snivelling and so feeble that even Radha can beat him with a stick, but Sukhi Lala’s strength comes from his ledgers in which he has imprisoned other villagers in ruinous loans. As movies moved to an urban setting, the moneylender villain became extinct, but Sukhi Lala, a memorable baddie in an iconic film, still endures. Also Read - Shamshera: Here's how Ranbir Kapoor became the BIGGEST hurdle for Sanjay Dutt to play his character Shudh Singh

Gabbar Singh in Sholay: as a child, I was so afraid of Gabbar that the background music that accompanied his entry became the soundtrack of my nightmares. Gabbar was no cartoon. His brutality was palpable. The fact that a character so viscerally nasty could eventually be used to sell biscuits to kids is further proof of legendary Hollywood writer William Goldman’s dictum that in the movie business, no one knows anything.

Sir Judah in Karz: played by Premnath, Sir Judah is a mute but that doesn’t mean he’s the quiet type. He gives orders through a series of knocks—his sidekick, played by Mac Mohan, then translates it, always starting with: “Sir Judah kehtey hain…” What’s not to like.

Shakal in Shaan: this is the Bollywood version of a Bond villain— a man with his own island, shark and crocodile tanks (into which he routinely dunks people who displease him), and assorted high-tech gadgetry. His style of nonchalantly caressing his bald head, even as he plots his nefarious activities, also made him super-cool.

Anna in Parinda: Nana Patekar gave an award-winning performance as the insanely brutal Anna, who is only afraid of one thing—fire—because he may or may not have burnt to death his own wife and child. Anna, with his quick grins and trigger- happy ways, is an unpredictable psychotic. Patekar was so immersed in the character that he actually burnt himself while doing the climax scene.

Langda Tyagi in Omkara: in a film filled with fine actors, Saif Ali Khan emerged as the most memorable. His Langda Tyagi is feral and vicious.

Mogambo in Mr India: Mogambo is the original cartoon villain with a priceless silver and white den, wearing a bandmaster-style gold and black outfit and rings on each finger. His henchmen have names like Captain Zorro and they greet each other with: “Hail Mogambo!” Mogambo, of course, dreams of ruling India and has the most memorable signature dialogue in the annals of villainy: “Mogambo khush hua.”