Mahatma Gandhi dancing with girl is an actor! 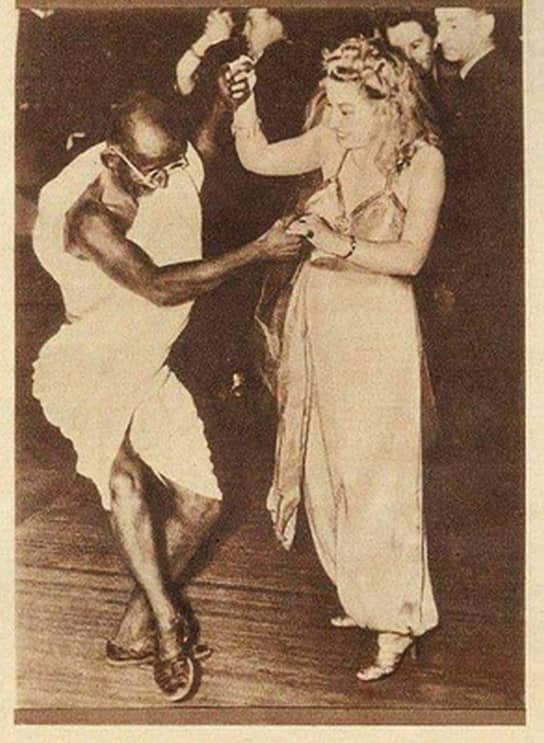 A fake picture of the Father of the Nation, MK Gandhi has been doing the rounds on the Internet

If you happened to see a picture of legendary Indian Mohandas Karamchand Gandhi, better known as Mahatma Gandhi, merrily dancing away with a white girl at a party while still in his dhoties, take heart - it is not him! Take a closer look, and you will see that the image is real, but the Gandhi in it is fake. Apparently it is an Australian actor posing as Gandhi who is shaking a leg with the lady. The two were captured at a charity gala in Sydney, say reports. Also Read - Maharashtra minister calls Kangana Ranaut 'nachnewali' over her comments on Mahatma Gandhi

Social networking sites were abuzz with people sharing this pic or talking about it. Gandhians swore it's not him, while anti-Gandhi people had a good laugh looking at it. Bollywood PR Dale Bhagwagar pointed out, “If you mark this picture minutely, Gandhiji has muscles on his arms. This is the give away, as we all know that the Mahatma was skinny." He adds, “This kind of a mix-up of history could be dangerous. It may have long-term implications with a large number of people being misled with incorrect perceptions about national leaders and icons of society.” Also Read - Kangana Ranaut TARGETS Mahatma Gandhi; says ‘offering another cheek’ gets ‘bheek’, 'choose your heroes wisely'

In another picture, Gandhi's killer Nathuram Godse was shown with a gun. This was apparently a film still from Nine Hours To Rama (1963) in which Horst Buchholz had played Godse and Gandhi was essayed by JS Casshyap. Do you think these pictures on the Internet are an insult to our great national leaders? Also Read - Godse: Sandeep Singh, Raaj Shaandilyaa and Mahesh Manjrekar announce a film based on Nathuram Godse on Mahatma Gandhi’s birth anniversary