Here is a detailed look 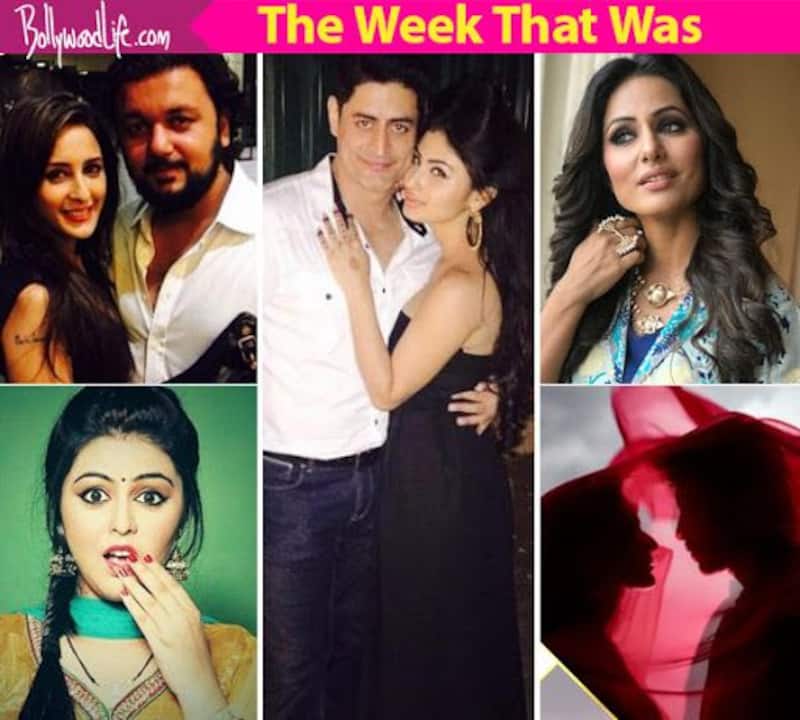 A lot happened in telly town this week. From Mouni Roy's shocking statement, to Chahatt Khanna's divorce, the news feeds were buzzing throughout the week. While Hina Khan became a household name for her stint of Akshara, her statement on Yeh Rishta Kya Kehlata Hai broke many hearts. On the other hand, Shafaq Naaz made headlines for her cameo in Kullfi Kumarr Bajewala and not entering Bigg Boss 12. The entire week was eventful. Here is a detailed look…

The actress was once rumoured for dating her Devon Ke Mahadev co-star, Mohit Raina. Though they never accepted it, in many interviews they called each other as 'close friends'. From attending each other's birthday party to going for film screenings, the duo was snapped together quite a few times. Moreover, in his recent statement, Mohit said that Mouni is the only celeb friend he has. But it seems something drastic has happened between the duo. In a recent statement to Mumbai Mirror, Mouni said, “I am single and have been so for a long time. Mohit and I are not even friends.” And we were left shocked. Also Read - From disrespecting Hina Khan, Helly Shah for their Cannes appearance to calling Nayanthara a lesser star; 5 times Karan Johar proved he needs to think before he speaks

The actress debuted with the Star Plus' popular show, Yeh Rishta Kya Kehlata Hai and became everyone's favourite Akshara Bahu. Even today, many know her as Akshara. But it seems that the actress has come too far and has forgotten everything about her past. In one of her statements to HT, she said, “I don’t even remember. I swear. Everybody knows that I have this problem of forgetting everything. I don’t remember anything. I actually don’t remember anything about my show which I did for eight years. Isn’t it strange? This is how I am in real life. I move on very easily.” Also Read - Drashti Dhami OPENS up on why she will never do reality shows like Bigg Boss or Khatron Ke Khiladi despite being offered several times

The Bade Achhe Lagte Hain actress shared a cute picture with her babies and tagged herself as a single mom and this raised many eyebrows. When the media contacted her, she requested for some privacy and said that the time is not apt to comment further. But soon the actress broke her silence and shared with an entertainment portal that she is parting ways from her husband and will be filing a divorce. "It's my personal life and I don't need to give clarification to any, other than my family. But yes it's true, it's been some weeks we have separated and filing for a divorce, reasons are too personal to be disclosed. I request fans and people to respect our privacy," said the actress.

The actress was recently making headlines for being one of the contestants in the next season of TV's most controversial show, Bigg Boss 12. Though the actress dismissed the rumours, but talks were on. Finally, the actress declared that she has joined another show. She will be seen in a role of a doctor in Kullfi Kumarr Bajewala. The actress confirmed the news and told TOI, "I have been roped in to play an important cameo in the show. I can't reveal much about the storyline but it will surely leave you on the edge of your seat. I always wanted to work with 4 Lions Films, this is like a dream come true."

This is one of the much awaited shows of this year. Ekta Kapoor announced the reboot version of the iconic love saga and people couldn't hold their excitement. Finally, the show is all set to hit th small screen and the date got announced this week. It will go on air from September 10 in the 8 pm slot.

The other newsmakers of the week were, Mohit Malik for getting injured while shooting a chase sequence and got stitches. On the other hand, Shakti Arora from Silsila Badalte Rishton Ka also got injured while a wooden plank fell on his head and he missed shooting. Vikas Gupta got bitten by a snake while he went to save Bharti Singh in Khatron Ke Khiladi and Aditya Narayan was also rushed to the hospital for hurting his eyes.