We bet that Kareena Kapoor Khan will be pleased after watching this BollywoodLife EXCLUSIVE interview with Salman Khan. Our editor-in-chief, Tushar Joshi had a candid tête-à-tête with the Tubelight hero recently. And during this chat we handed out some pictures to the actor and asked him to reveal the story behind these clicks. We were totally taken aback by Salman's memory and revelations. One of the pics was that was Kareena and Salman that had gone viral the last time BollywoodLife took it up. And yes, we're certain that again our video interview where Salman is talking about a nine-year-old Bebo will become one of the most widely talked about videos. So go on and find out the story behind this throwback picture of Kareena Kapoor and Salman Khan... Also Read - From Jibraan Khan to Hansika Motwani: JAW-DROPPING transformations of child actors from Shah Rukh Khan, Hrithik Roshan and other Bollywood celebs' movies – view pics

Salman revealed, "She (Kareena) even then looked like the biggest star that was going to be. She was nine years old here and this picture I think was taken in Udupi. Lolo and me were shooting for Jagruti. So this was in my room in Udupi and Bebo was there with Babitaji." Also Read - Salman Khan opens up about bringing Dabangg’s Chulbul Pandey back but with a TWIST; says, ‘I am incredibly proud of him’

The Tubelight star then concluded, "So this is my heroine from Bajrangi Bhaijaan, from Bodyguard, is this kid here, her name is Kareena Kapoor. Today she's one of the biggest stars. And even then we all knew that she's going to be in this position." Also Read - Netflix to stream a docu drama on 'Sholay' iconic writer duo Salim-Javed? Here’s what we know 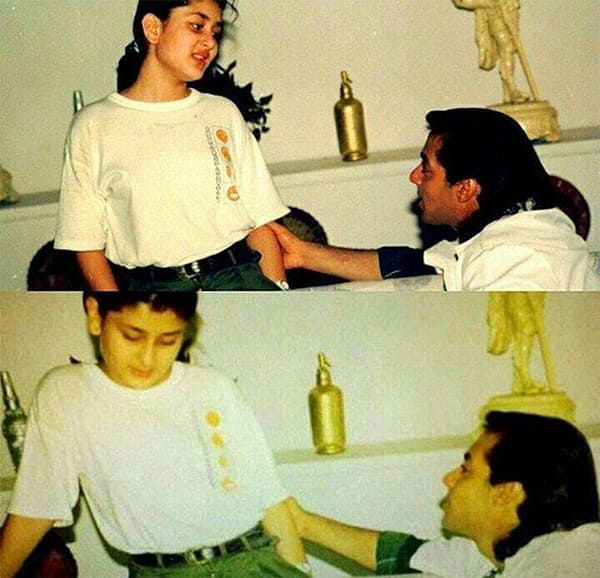 Salman Khan and Kareena Kapoor have worked in several films together, their last outing together Bajrangi Bhaijaan was a blockbuster. And yes, we totally agree with Salman, Kareena Kapoor is indeed one of the biggest stars in Bollywood today. The actress has broken several norms both on and off screen. In fact, Kareena is one of the few heroines who flaunted her pregnancy and proved that marriage or motherhood cannot affect her career. The actress is all set to return to the silver screen with Veerey Di Wedding.

Salman Khan's Tubelight is all set to hit the screens tomorrow on July 23. This is the third time Salman is collaborating with director Kabir Khan. The actor has also started work on his next film and action-drama Tiger Zinda Hai, which will be directed by Ali Abbas Zafar. For more exclusive news and updates on Salman Khan and Tubelight, come back right here!