If she was incidental to the plot, then why is she concerned?, Atul Kasbekar reacts STRONGLY to the Facebook post of Neerja's colleague!

Read on to find out the EXCLUSIVE details he shared with us...

Sonam Kapoor's Neerja has received lot of appreciation and love from public, fraternity and critics alike. This biopic on brave heart Neerja Bhanot, a flight attendant on Pan Am, who helped save 359 people from a hijacked plane has struck a chord with the masses. The survivors of the plane too came out in support of Sonam's this movie and recalled the final moments of the episode, however it seems one person was not happy with the film. Nupoor Abrol, who claims to be a crew member on the flight, had posted a rather strange Facebook post on Sunday, which created quite a furor. Also Read - Ellipsis Entertainment issues a statement addressing sexual harassment charges on Atul Kasbekar

In a shocking twist, Atul Kasbekar revealed that Nupoor Abrol was not even a part of the crew that was on board Pan Am 73. He mentioned to us EXCLUSIVELY, "This woman, I believe, wasn't even on the plane." Also Read - Rishi Kapoor reacts on Nirav Modi's PNB Fraud Case

So what is his reaction to her post about the film? The producer is unperturbed. As he added, "Everyone is entitled to their opinion. I don't think I need to give clearance to anyone who has to say something, the fact of the matter is that three countries of the world - America, Pakistan and India have given her (Neerja Bhanot) a bravery award and I am sure they have stringent guidelines as to how bravery awards are given. Rather than just checking that one Facebook post. Also check out the first hand accounts of people who were on board the plane on the day of the incident. She wasn't a part of the flight crew, then what is she talking about?" Also Read - Neerja Bhanot's family move court against the makers of Neerja, accuse producers of criminal conspiracy

Earlier, Nupoor Abrol had posted on Facebook, “Yes, truly a very difficult moment. But also a difficult moment for all those flight attendants to accept the movie for what it is unfairly propagating. Neerja was a wonderful person and I think even her soul today would cringe at taking this undeserved adulation. Not fair to the FA’s who have in reality faced their ordeal!”

She had further said, “Oh no! I was incidental in that plot. It was Astrid, Sherene, Sunshine and off course Massey who were the real heroes of the day. I am glad today I can show my gratitude to them.” 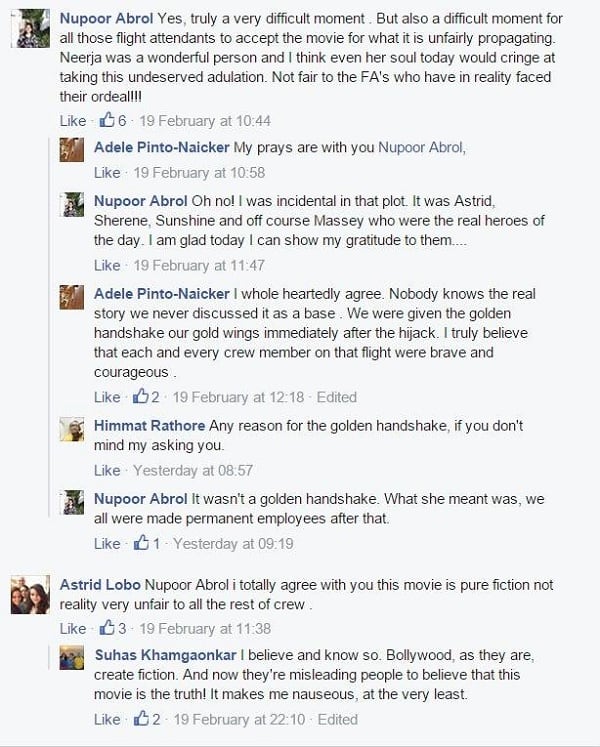 The other first hand accounts presented by the survivors of the ill-fated flight had stated that Neerja was the one who helped save the passengers on board, however this post made everyone question the film. However, the makers are unperturbed. What do you think about Atul Kasbekar's shocking revelations? Tell us in the comments section below!

Also check out our EXCLUSIVE video interview with Atul Kasbekar for Neerja below: