SHOCKING! Mouni Roy and Mohit Raina unfollow each other on social media; has the couple broken up?

Mohit Raina and Mouni Roy's love story was really cute! The two fell in love while working with each other in Devon Ke Dev... Mahadev and since then, they have been inseparable. The duo was one of TV's most adorable couples ever, however, looks like they might just have broken up! Yes, according to a report in Mid-day, all was not well between Mohit and Mouni. In fact, if you check their Instagram and Twitter accounts, you will realise that they have unfollowed each other. Earlier, both the stars used to tweet to each and Mouni had even shared their picture on her Insta page. But she has deleted that too (see snapshot below)! All this has not only given rise to speculations that things aren't merry between the couple, but also that they might have just split... Also Read - Sorry ladies! Mohit Raina has no plans to return to TV - read exclusive interview

Earlier in the year too, there were reports that they were on the verge of breaking up. There were a lot of questions posed about loyalty and jealousy in their relationship, with Mouni’s name being maligned, as she shot for Akshay Kumar's Gold. However, Mohit had exclusively revealed to us, "This is rubbish! Let her focus on her work. We are good, she has worked hard for years, day and night, to be here. People are trying best to pull her down and malign her name. People can’t handle somebody’s growth and happiness. It’s not overnight. The real hard work is behind the scenes. We all are proud of her achievements, it’s just the beginning for her." (ALSO READ - What did Mohit Raina say when he was asked about marrying Mouni Roy?) Also Read - Mouni Roy disapproves Mohit Raina's bearded look from 21 Sarfarosh: Saragarhi 1897 - watch video 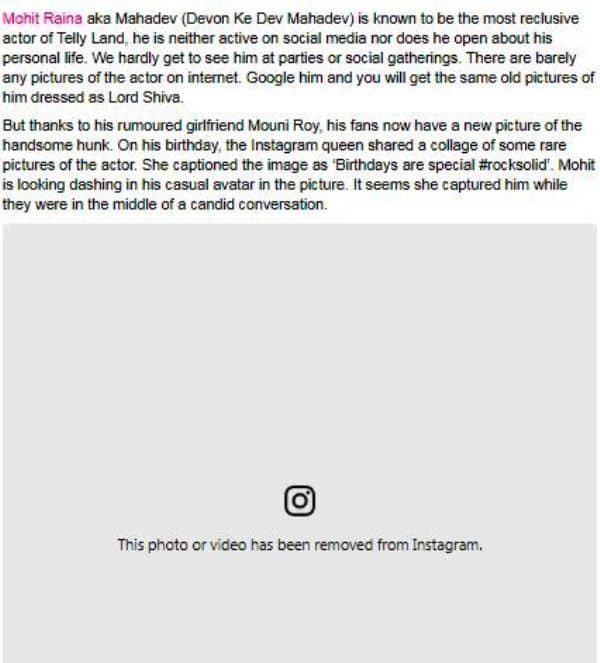 But with them following each other on social media and deleting their pictures, we guess they might just have split for real this time around! However, only Mohit and Mouni can confirm this development. So stay tuned to BollywoodLife as we get you more dope on Mohit and Mouni's relationship right here...