The mystery behind Akshay Kumar's this fashion statement revealed!

Well, we know Akshay Kumar has some great releases this year like Toilet - Ek Prem Katha, Crack, Gold etc. But today we are more interested in talking about Khiladi's this fashion fetish

Okay guys we bet if you're an Akshay Kumar fan, you already know that the actor has coolly been pulling off several latest fashion statements. We're certain that like us you too have wondered why does Akshay always have his trousers pulled up. We have managed to find out the actor's fetish for the rolled up one pant look. A source close to the actor revealed that this is not something that the actor has been doing off late. "For Akshay martial arts is a way of life. He (Akshay) has been doing it from his college days and it is because of his passion for martial arts. Akshay feels free when he keeps his pants this way and doesn't feel bound by anything." Here take a look at times when we spotted Akki with his trademark style... Also Read - Trending Entertainment News Today – Shah Rukh Khan, Salman Khan and Akshay Kumar’s era is ending, says Priyadarshan; The Family Man 2 actress Priyamani's marriage with Mustafa Raj is illegal? 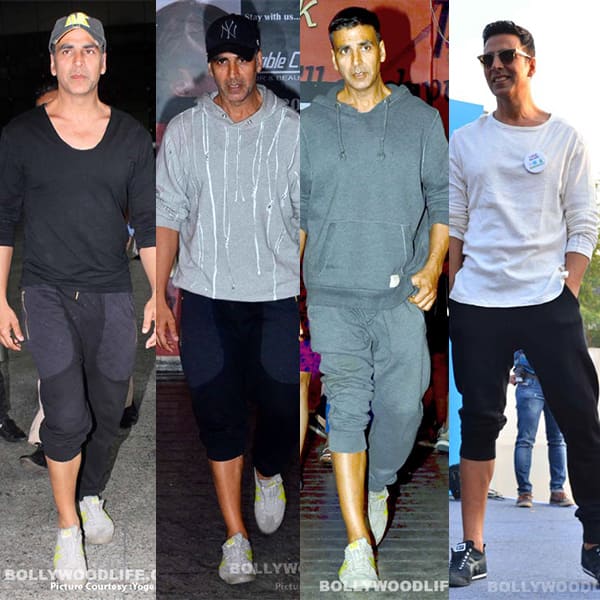 The Crack actor has managed to be fashion police's favourite. After all he's someone who can sport suit as well as a romper, he can look like a stud even in a T-shirt and tracks. Akshay's party outings (which are super rare) or then his travel looks at the airport, the actor always manages to score well. He has managed to look hotter than any of his contemporaries in the salt and pepper look and is often referred to as Bollywood's George Clooney by many. And as far as his this statement is concerned we have seen Akshay like this at his house parties, airport, film promotional event, almost everywhere. Guess that's the Khiladi comfort style. (Also read: Salman Khan’s ex manager Reshma Shetty to handle Akshay Kumar now – read details) Also Read - Do Ranveer Singh and Akshay Kumar play bullies or buddies to newcomers on the sets? Sooryavanshi actor Mrunal Jain reveals it all [Exclusive]

Looks like Akshay's this style statement is something that has become his signature. And we will not be surprised if the trend will be picked up and aped by his fans soon after finding out the real reason why the actor chooses to pull up his pant cuff. We also noticed that Akshay sports a black thread on his right ankle, to ward of evil eyes? May be, may be not. Whatever the case looks like Akshay's pants are being closely watched... well, in a good way of course. For more such Bollywood tit-bits come back right here!