BTS ARMY, yesterday was BTS' Golden Maknae Jungkook's birthday. The Run BTS singer came live late in the night and Kim Seokjin aka Jin dropped by to wish him on his special day. Jin was a little drunk. 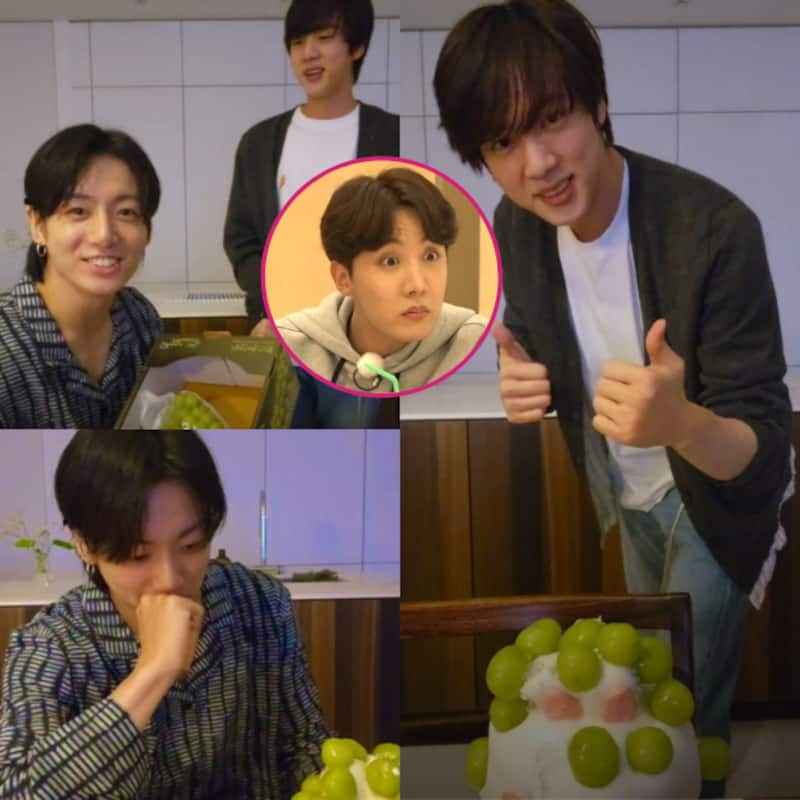 BTS member Jungkook celebrated his 25th birthday yesterday. And the young handsome man conducted a live session with the BTS ARMY and had a fun Karaoke/ acapella concert session online. Jungkook sang songs as he always does and answered a few questions, honoured ARMY's song request. He was drinking as well, it seems. And it's really unlikely and rare when BTS members don't make an appearance in other BTS members' live. And that's what happened last night. BTS' eldest member, Kim Seokjin aka Jin, made an appearance. Jin was a little drunk. Jin and Jungkook's interaction during the VLive won a lot of hearts. Also Read - BTS sweep three BIGGIES at People's Choice Awards 2022 including Jungkook-Charlie Puth's Left and Right

Jin visits Jungkook on his birthday; was a little tipsy

Jin made a surprise appearance at Jungkook's birthday party. He popped up from behind the kitchen counter where he had been hidden until Jungkook started his LIVE. Jin gifted grapes to Jungkook and added that he is not promoting the grapes from his uncle's farm and was just passing by to give them all to the members. Jin then proclaimed that he has changed his mind since it was late. He shared that Jungkook was the second member he visited. BTS' eldest member Kim Seokjin was very talkative as usual. But this time, he was also a little drunk. Also Read - BTS: Kim Namjoon aka RM’s solo album Indigo is a MASSIVE HIT already; achieves THIS enormous milestone in one day

When Jin shared that he has had one glass of drink, Jungkook exposed him that he has had two glasses. Later, Jin made Jungkook pretend that he brought the cake. Jin had intended to bring the cake but since it was too late night in night and all the cake shops were closed for the day. A little tipsy Jin wholeheartedly sang the birthday song for Jungkook who also pretended to be very much surprised. Also Read - BTS: ARMY trends #SpotifyCorrupt after Jungkook loses title of Most Streamed K-Pop soloist of 2022 hours after being recognized by the platform

BTS ARMY is tripping over Jin and Jungkook's interaction

Jungkook's birthday VLive is one of the biggest trends in Hollywood News. ARMY thought that Jungkook would come online the night before and begin his birthday with them. But there was no update on it. But Jungkook conducted the live late in the night right before his birthday ended. Jin's short but a surprise visit was quite goofy and adorable and it won a lot of hearts. Jin thought that he'd be the only member who would come and greet Junkook on his birthday but he was stumped twice when Jungkook revealed that Jimin had dropped by. Jin started taking the names of every BTS member and missed out on J-Hope's name and took Jungkook's name instead. It was one adorable moment of Jin from the live. J-Hope and Jimin, both, had dropped by in person to wish Jungkook apart from Jin. Check out the tweets here:

The way jin was looking at jungkook while making wish :(pic.twitter.com/i7dLXRXpIe

“aren’t you jungkook” jin is so funny please? pic.twitter.com/xvrUcO02to

Jin hyung making him smile and giggle oh i cant do this pic.twitter.com/jNxnC8YCN5

PLEASE NOT JUNGKOOK ACTING SUPRISED WHEN JIN IS WALKING WITH THE CAKE JINKOOK ARE SO DRAMATIC LMAO#JungKook #JUNGKOOKDAY #VLIVE pic.twitter.com/oBsclkP8g3

The fact that Jin hyung is very much drunk rather than the birthday boy?pic.twitter.com/2qPmVSRw0C

pls jin drunk is the cutest thing ever he just wants validation and love like same pic.twitter.com/kfKeXIIFOx

In other news, Kim Taehyung's dating rumours with Blackpink's Jennie don't seem to die down. On the other hand, RM's appearance in Sexy Nukim has sent ARMY into a tizzy.