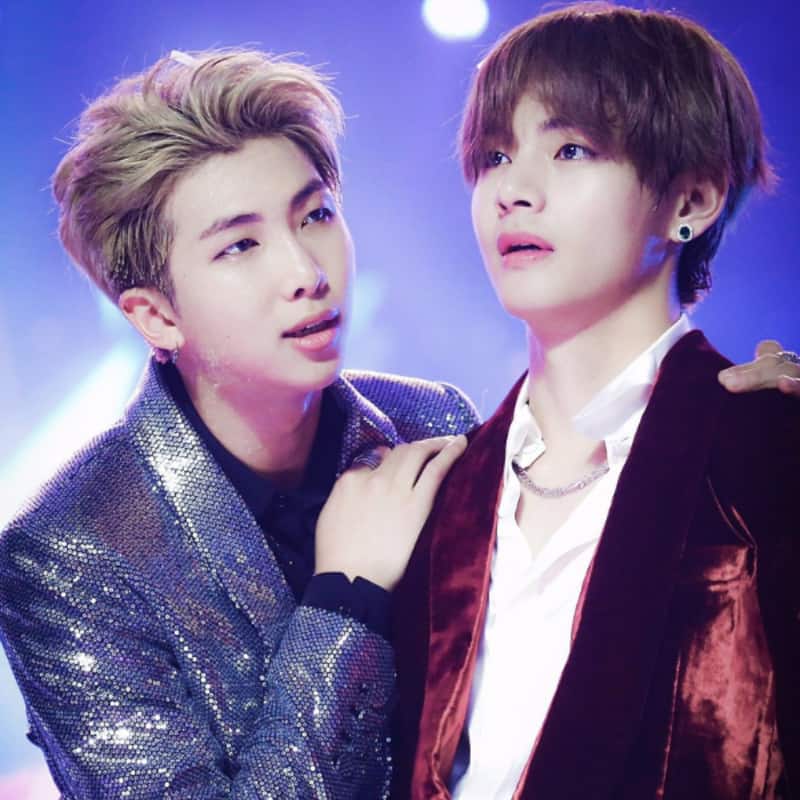 BTS members - RM, Jin, Suga, J-Hope, Jimin, Taehyung and Jungkook - all are quite popular, individually as well as BTS. And every now and then, BTS members have been prey to dating rumours. Almost all of the members have been into a dating scandal and the recent two names are RM and Taehyung. In the last couple of weeks, BTS V and RM made news for various reasons such as their solo projects, schedule and also dating rumours. And BTS ARMY is upset with Hybe due to the same. Also Read - BTS ARMY imagines V aka Kim Taehyung as Simba and their resemblance is uncanny [Watch Adorable Video]

So, a couple of days ago, RM was embroiled in a marriage scandal where is was reported that RM was going to tie the knot with a fan whom he met at a fan sign during 2014-2015. The rumours spread like wildfire but HYBE was quick enough to respond. They released a statement saying that the rumours were not true and that they are taking action against the malicious rumours. Also Read - BTS' V aka Kim Taehyung teases ARMY with his muscles picture on Weverse; REVEALS the real reason of his long absence

We don't know who started it but as per the photos that were circulated online, a snapshot of (assumed) V aka Kim Taehyung and BLACKPINK's Jennie at Jeju Island. And thence, their dating rumours spread like wildfire. Jennie's talent management group, YG entertainment had responded to the same saying that had nothing to say and would update if there was any other response. On the other hand, HYBE was silent and didn't dish out any statement. Also Read - Run BTS is back: Here are 8 most-entertaining episodes featuring Kim Taehyung, Jungkook, Suga and other Bangtan Boys [Watch]

For years, HYBE has been swift with its responses to such dating rumours with any of the BTS members. However, the lack of response on Big Hit's part has left ARMY wondering why didn't HYBE respond before. Check out the tweets here:

The big hit denied RM's dating and marriage rumors but still haven't voiced the dating rumors of Taehyung and Jennie despite being mentioned a lot by the media. Also means BIGHIT INDIRECTLY ACCEPTED pic.twitter.com/8JheBTfjRc

Hybe shut down rumour of jhope dating rumours and rm married but its been one month of taehyung and jennie they didn't make any statement https://t.co/cO4vu6Q2Tm

from “we can’t confirm or deny” of taehyung’s rumours to “that’s totally fake” of rm’s rumours, big hit did totally confirm taehyung and jennie are a thing. get over it y’all, life goes on ? https://t.co/kCjsDgyjAD

See how quick they were with RM but silent about the Taehyung and Jennie thing. Im telling y'all hybe planned that rumor to cover up garams bullying scandal. https://t.co/lragdWluwl

i didnt know there was a rumor that RM was gonna marry a non celeb woman untill Bighit denied it otherwise taehyung and jennie rumor have been spreaded all over the world yet Bighit still not give us any clues or responses. sus.

On the work front, Kim Taehyung is going to attend Celine's men's Summer Collection at Paris Fashion Week. He will attend the same with BLACKPINK's Lisa and Park Bo Gum. Taehyung also has an album in the pipeline. He and Park Bo Gum will feature in the spin of In The Soop with Park Seojoon, Park Hyungsik and Peakboy.