BTS's hyung line Kim Namjoon aka RM, Kim Seokjin aka Jin, Min Yoongi aka Suga and Jung Hoseok aka J-Hope are stealing hearts and how! And it's all thanks to their long mane. Check out the tweets of BTS ARMY going gaga over the same here: 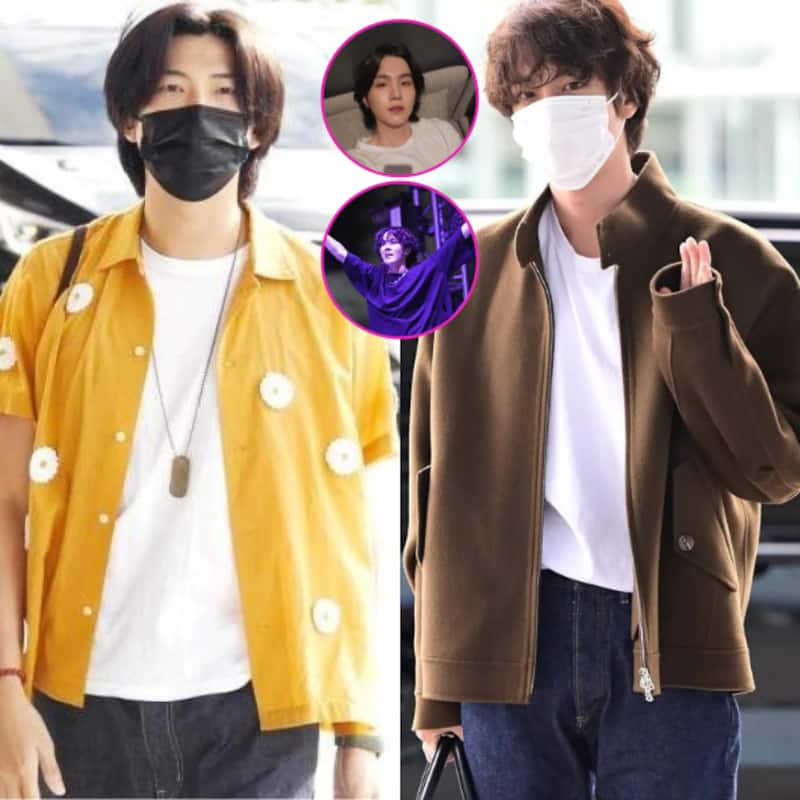 BTS' hyungline is stealing thunder from the Maknae line these days. Yes, you read that right, BTS ARMY. RM, Jin, Suga and even J-Hope have been sending their fans into a tizzy and it's all because of their hairstyle. Well, the boys haven't been chopping up their hair and ARMY is just loving it. Bangtan Boy's growing their hair and left ARMYs gushing and why not, the mane suits the boys. Especially the mullet style is being loved by the ARMY. In fact, 'His Hair' is one of the big trends on Twitter that is full of BTS members' pictures and video clips. Also Read - BTS: After Jin, Suga comes up with a booze show called Suchwita; special guests have loads of fun [Watch Teaser]

Firstly, let's talk about BTS leader Kim Namjoon aka RM's hair. He was spotted at the Gimpo airport when he was leaving for Japan with Bang PD. His cheerful avatar and his silky smooth hair left ARMY gushing and crushing hard on him. RM's casual look made him a bias wrecker that day. Also Read - BTS: Jin to release The Astronaut merch; ARMYs find Easter eggs in the teaser video [Watch]

AAGGHHHH, IM SOOOO CRAZY FOR THIS KIM NAMJOON, HIS HAIR, HIS FVCKINGGGG HAIR!!!, You look so DREAMY With your long hair,Joonie ,??
HAVE A SAFE FLIGHT NAMJOON TO JAPAN#RM #NAMJOON @BTS_twt #Hybe pic.twitter.com/FVS8WSgXaA

During the Chuseok 2022 greeting video and live session, Jin's hairstyle was revealed in front of the ARMYs. Of late, Kim Seokjin is seen in a fluffy hairdo in brown colour. He was spotted at the Incheon airport a couple of hours ago and his hair became the talk of the town again. Also Read - BTS: Kim Taehyung, Jungkook and other members turn Akshay Kumar, Suniel Shetty from Phir Hera Pheri as they groove on 'Aye Meri Zohrajabeen' [Watch Hilarious Video]

We have truly returned to fluffy brown hair Jin and I am living my best life ? pic.twitter.com/LJlpd6ZUMf

Suga, these days, has been sharing a lot of selfies on his Instagram handle. And his longish mane has left ARMYs crushing on Yoongi more than ever. Even when Suga had come live on Weverse a couple of days ago, despite using clips, Suga's long hair left ARMY speechless.

You see how Yoongi subtly cast his vote for Hobi long hair by posting how fucking hot he looks with long hair? Take the message to heart Hobi @bts_twt pic.twitter.com/JhsNlek44W

SG: (seems that) my hair is messy pic.twitter.com/9psFRDIcZD

His hair!! He tease us, he knew how we love his long hair,it's so pretty #SUGApic.twitter.com/9iX3QgqAGq

Back when Jung Hoseok aka Hobi was leaving for his Lollapalooza concert, his long hair caught ARMY's attention. But it was during the concert, that Jhope's mullet hairstyle was the talk of the town for days on end. Fans were bowled over not just by Hobi's energy on stage but also by his look.

SOBBING HE'S SO BEAUTIFUL? THE GLASSES? THE HAIR? I AM SO IN LOVE pic.twitter.com/BHtznD5euw

hobipalooza is iconic i still can’t believe people wanted Hobi to cut his hair like are you fr?!? his long hair is so beautiful pic.twitter.com/xHdAfYLRMj

Hobi's fluffy hair, the painted nails.. what a look ?? pic.twitter.com/vODvu7JACq

Meanwhile, BTS are on a hiatus from their group activities. Run BTS has also stopped again. However, there's a free BTS concert for the Busan Expo 2030 that is happening in October. Also, Namjoon's birthday is tomorrow.