BTS: ARMY is damn upset after some fans of Ananya Pandey mocked the K-Pop kings in their tweets. There is also a Grammy and Filmfare connection to it... 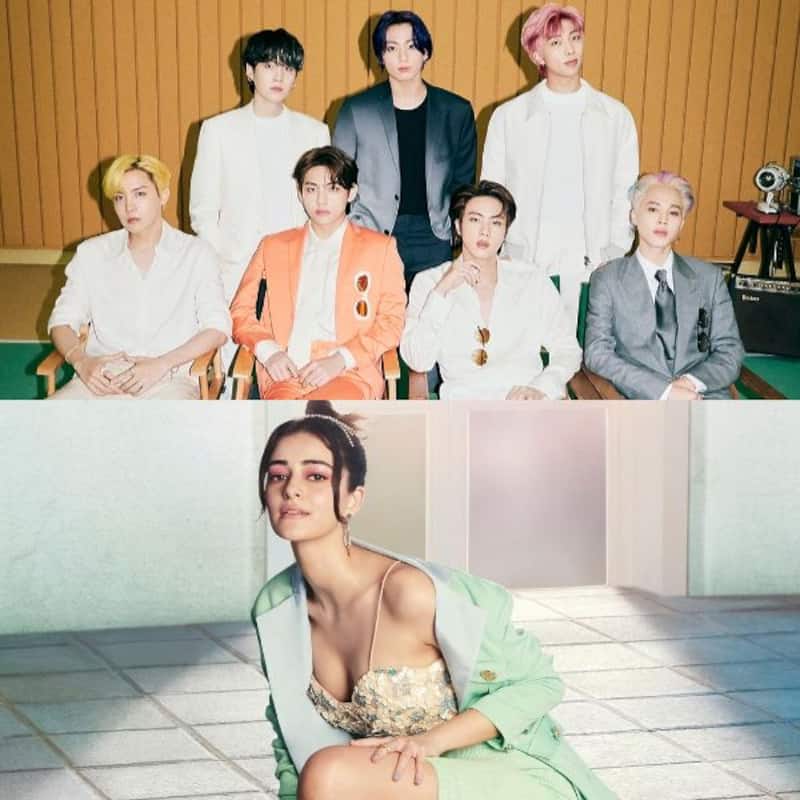 BTS fans have a lot in their hands. Their new music video Butter has broken records generating 113 million views in 24 hours. Today, they are also going to perform at the Billboard Music Awards. Their fans are damn excited. In the middle of all this, a fan war has erupted with Ananya Pandey stans. It seems some derogatory words were said about the K-Pop kings by a couple of her fan accounts. They said while Ananya Pandey won an award for her debut performance in Student Of The Year 2 from Filmfare, BTS could not manage a Grammy so far. Needless to say, BTS supporters have pointed out that the comparison is stupid. Also Read - Trending Hollywood News Today: Kim Kardashian body-shames sister Khloe Kardashian, Johnny Depp, Amber Heard trial movie – Hot Take trailer goes viral and more

The fan is surely struggling with ananya pandey pic.twitter.com/I9Gnm3bWGS

I don't think so your "Ananya Pandey got a film fare" got these many atleast a row in these many prizes??? P.s this is not even dull of their awrds lol ?
So they can't actually trend ananya Pandey and that they want to "drag" bts so that ARMY will trend her for them pathetic pic.twitter.com/kph1currIc

Ananya pandey Ananya pandey
Seeing she is after knowing y
trending: she is trending: pic.twitter.com/VG1URiR3be

@beboshoe do you see the numbers sweetie of your dear aAnanya Pandey and BTS. To me numbers say otherwise ?
I don't see how your dear Ananya Pandey and her irrelevant Filmfare award is worthy enough to be compared by Global sensations BTS.. Don't mess with armys ! pic.twitter.com/eOPmcXYIrg

Ananya pandey fan compared ananya to bts and said she won't stoop to a low standard as bts ??

Actually Ananya Pandey gained a lot of popularity(though negative)
many ppl didn't knew her name before this incident,these are masterstrokes of flop artists?

Who's this ananya pandey i don't know and i don't want to know. Just one thing i would love to brag "Miss pandey your stans are sooo toxic to compare filmfare with grammy and if you have the guts then try to grab billboards or any other renowned awards.

Something about Ananya Pandey's fans comparing her winning the Filmfare award to the nomination of BTS in the Grammys ?
The desi Armys are just roasting her fans??
You should read some twts they are funny

Omg such a ridiculous comparison....
I'm sooo disgusted...????
Ananya pandey and BTS ..plzz someone plzzz kill me ..I cant ..
??? pic.twitter.com/rMpEO7cJxI

We can see that fans of the group are rather displeased at this comparison made by some fans of Ananya Panday. Also Read - BTS: Big Hit Music cracks the whip on 'ill-intentioned' rumour without making any reference to V and Jennie 'leaked pics'; Jin's reaction is EPIC