BTS' ARMY has picked Jungkook from the BTS vocal line over Jin, Jimin, and Taehyung for singing a desi number in India. Desi ARMY wants the golden maknae Jeon Jungkook to sing a Bollywood number. Jungkook and Taehyung have a small margin. Check out the poll result below:

BTS ARMY, remember, we had conducted a poll asking who from the members - Jin (Kim Seokjin), Jimin (Park Jimin), V (Kim Taehyung) and Jungkook (Jeon Jungkook), y'all think fit the bill for an Indian song. And today, we are declaring the results for the same. Jungkook aka the Golden Maknae of the BTS has trumped over the rest of the members. Yep, you read that right. The Desi BTS ARMY has picked Jungkook to sing a desi song. Can you imagine JK singing a Hindi song, ARMY? Also Read - Hollywood News weekly rewind: Johnny Depp's love saga with attorney amidst case with Amber Heard, Britney Spears' nude pic and more

The Stay Alive hitmaker has garnered about 38% of the votes in the poll. Taehyung aka V, on the other hand, is right behind JK. The Christmas Stree and Singularity hitmaker has got 35% of the total votes. The With You singer Jimin aka Chimchim has got 12% of the votes whereas Jin aka Mr Worldwide Handsome has got 15% of the total votes. Well, they all are great for Bollywood numbers, we feel. But it seems Desi ARMY wants to hear Jungkook's vocals on a desi number. Check out the poll results below: Also Read - BTS ARMY trips over a girlfriend's heartfelt confession 'I miss BTS' to boyfriend in front of Eiffel Tower – watch video 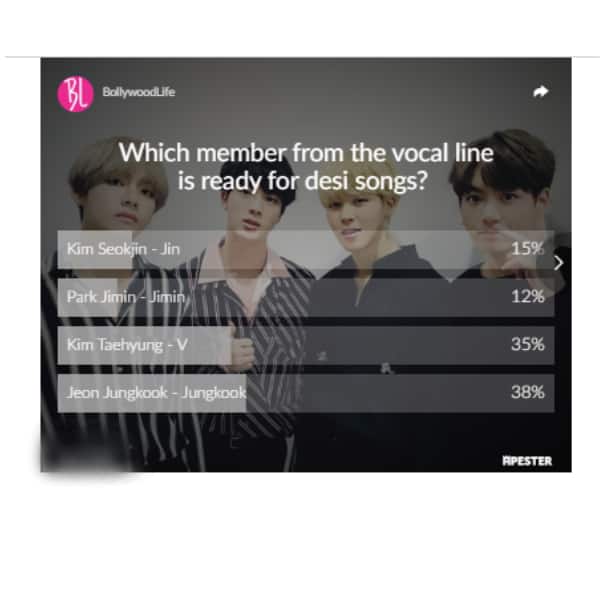