BTS member Kim Taehyung has taken a jibe at the media reports of his dating life. The singer seems to be very angry with the invasion of privacy and false reports that have been doing the rounds lately.

ust yesterday, the reports of BTS' V aka Kim Taehyung's dating rumours broke out a couple of days ago. It surfaced after he was spotted at an exhibition in Seoul, South Korea. Several K-media reported that he was snapped with the daughter of a business magnate, President of Paradise Group, Phillip Jeon. However, HYBE (formerly known as Big Hit Entertainment) had refuted the rumours saying that Taehyung and the chairman are just acquaintances. And it seems last night, BTS V had seemingly hit back at the false dating rumours in his own way. He took to his Weverse handle and posted a note. "It's pathetic Wanna sing UGH!" he posted with a vomiting emoticon. Now, ARMY has linked this to the dating rumours that spread recently. Check out V's post on Weverse here: Also Read - Single bite of BTS member Jungkook's meal is so expensive that it can help you rent a 2BHK in Mumbai's most expensive location 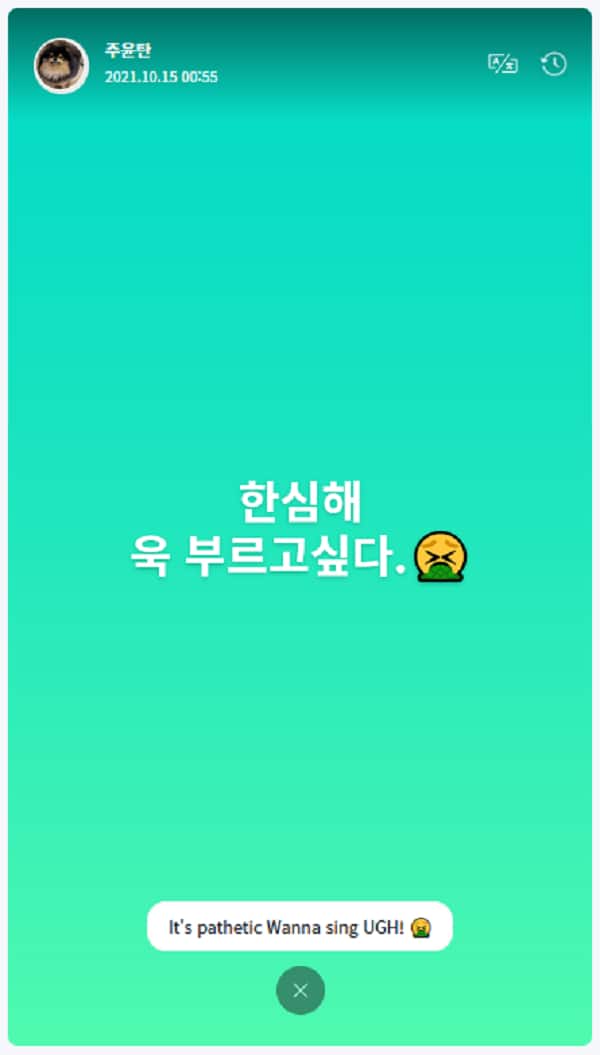 Also Read - BTS ARMY: You were highly MISTAKEN if you thought Jungkook loves to imitate JUST his hyungs! Check out the hilarious copy cat [VIDEO]

It seems Taehyung also shared another post (seems like he deleted it later) on Weverse. In it, he said, "Today's dream is to shoot poison at the back of their necks. Be careful of your back neck. Softly," read the translation of the now-deleted post. Check it out here: Also Read - Trending Hollywood News Today: BTS member Taehyung to lend voice for BFF Choi Woo Shik, Taylor Swift and Kanye West’s last-minute additions for Grammy Awards and more

Not just the Bangtan Boys or their management company, even the BTS ARMY is fiercely protective about BTS. They have hailed V's post on Weverse and have joined him in support. They have hailed him for seemingly reacting to his dating rumours in such a strong manner. BTS ARMY is furious that K-media has been invading BTS members' privacy every single time. BTS V had been attending the exhibition in a private capacity. It was not his work schedule and HYBE and the boys are very cautious about their right to privacy. Check out ARMY's support to Taehyung here:

Currently listening: ?
KIM TAEHYUNG is not the guy to be messed with. ARMY has got your back!! ??? @BTS_twt #ugh #v #KimTaehyung #bts #BTSARMY

"You by Ømi"
"WE LOVE YOU TAEHYUNG"#KimTaehyung #UGH #V #BTS https://t.co/OZXMzq0gqt

Well in my opinion about V’s posts.

Taehyung is too hot for this ,"UGH"!!!? be careful media and antis he can swallow you up just by his gaze
~PATHETIC ?#TAEHYUNG #BTSV #뷔 #V #KimTaehyung #BTSARMY #BTS pic.twitter.com/FSzqE1CmEN

from "i left a purple balloon in your dreams, go and look for it ! ☺" to "pathetic, i want to sing UGH ? in my dreams tonight, i'll shoot poisoned needle on their back necks. please watch out. puk puk ??" real quick ?? brutal taehyung ??@BTS_twt #V #BTS #BTSARMY

"KIM TAEHYUNG" ! Not a man to be messed around!!
He went I don't give a UGh really fast?
Goshh the power thiss man holds!!#v #BTS #KimTaehyung

"pathetic. i want to sing UGH ?" and "in tonight's dream i'll shoot poisoned needle on their back necks. please watch your back neck. puk puk ??"

THIS IS FOR THE 'ARMY' WHO TOOK PHOTOS OF HIM DURING HIS PRIVATE SCHEDULE WITHOUT HIS CONSENT,@BTS_twt #V #BTS #BTSARMY pic.twitter.com/mWFBw6dDJw

I think V wanna sing these parts of UGH cz of his dating rumor "The truths may become false, the lies may become true
In this place, everyone becomes someone with perfect ethics
And perfect judgment, that's funny"#TAEHYUNG#TaehyungProtectionFromHybe#BTS#BTSV Let him live plz

Meanwhile, the first episode of BTS In the Soop 2 is releasing today in a couple of hours. ARMY is excited about the same.