Megan Young, Filipino actress and former Miss World had expressed her liking to BTS. She also spilt the beans on which of the Bangtan Boys were her biases. Can you guess, BTS ARMY?

Bangtan Boys have fans all across the globe. And guess what, Filipino actress and former Miss World is a fan of BTS members, too. Megan Young is a BTS STAN, and she has not one but two biases. Yes, you read that right. Megan posted a couple of pictures on her gram with actor-boyfriend Mikael Daez. It Mikael has stuck a Super Tuna pose. She has posted a picture of fish-shaped ice cream and gave a Super Tuna reference. "Tuna Panga for the win but Super Tuna for kilig vibes a shoutout to my chika mates @_jaselizabeth and @tammycabais who have been so supportive that they even sent over some fish looking ice cream," Megan captioned the post. Check it out here: Also Read - BTS: Jungkook, Taehyung, Jimin get perfect desi songs in this superb thread made by Indian BTS ARMY

You would think Jin would be Megan's bias. Well, you are not wrong. A fan had commented on her post asking her whether Jin is her bias. Megan replied to her saying, "I love them all really but Jin and Namjoon remind me of Fofo the most." It means she loves both Namjoon and Jin. Check out her comment here: Also Read - BTS: Jin performing Garba on Dayaben aka Disha Vakani's song is the must-watch video today, check videos of other members 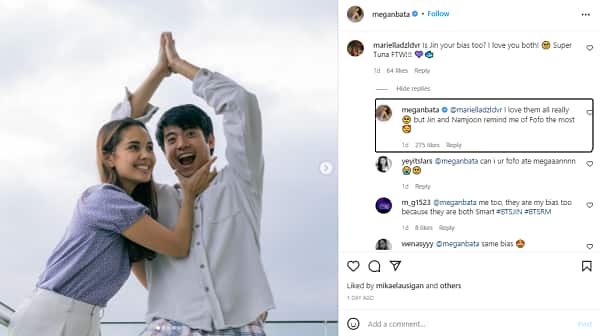 Aww, isn't she sweet? Namjoon and Jin are really handsome and it's quite difficult to pick one out of the two. While one is Mr Worldwide Handsome, the other is Mr Muscles and God of destruction. They are goofy, adorable and charming in their own way. This is not the first time beauty queens have expressed their liking for BTS. Before now, a Brazillian model named Gizele Oliveria had also expressed her liking for BTS. Gizele is a Jimin stan. Gizele is known for her work with Victoria’s Secret Fashion Show.

Another social media influencer had opened up on her love for BTS. Named Amanda Diaz, her boyfriend had surprised her by giving her the tickets to BTS' concert in LA's SoFi Stadium. ARMYs had asked her about her bias and she had named Jimin too.