BTS: Jimin's Saint Laurent shirt from 2018 makes a reappearance in a faded form; ARMY says, 'So uncelebrity like to be wearing in public....' [Read Tweets]

BTS fans aka ARMY spot Jimin wearing his fave Saint Laurent shirt from 2018 in his current LA trip. They are bowled over by his humility 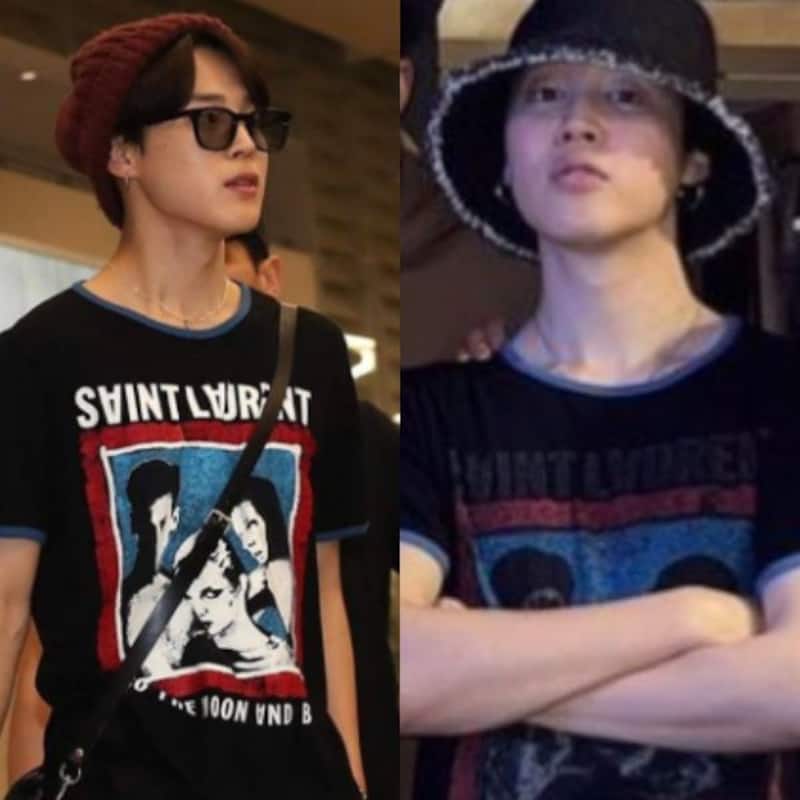 BTS members are always in the news. BTS vocalist and dancer Park Jimin has stayed back in the US for a personal schedule after he attended the Lollapalooza Concert where Jung Hoseok aka J-Hope performed in a record-breaking night. It looks like he is working hard on his solo album. The singer was clicked with music producers Taylor Hill, Tommy Brown and others in Los Angeles. ARMY went gaga seeing the biceps of Baby Mochi but something else got attention too. He was seen in a faded blue Saint Laurent tee. Eagle eyed ARMY noticed that it was the same one he wore in 2018. Well, Jimin is not shy about wearing his fave outfits again and again like most of us. Also Read - BTS: Jimin gets death threats from a Kim Taehyung-Jungkook stan; ARMYs slam the toxic shippers [view tweets]

what the hell has this shirt been through im cryingnfjd pic.twitter.com/XVSdvXDacS

Needless to say, Jimin fans were surprised to see him wear the same shirt. Others said that this was indeed humble and frugal behavior from one of the richest musicians in South Korea and the world. Others said that this proves that they're just like us. Take a look at the tweets... Also Read - BTS’ Kim Taehyung and Jennie’s dating rumours reach insane level as plans to confront latter surface; Blinks furious over privacy invasion

Looks like it faded. He must've been throwing it in the washing machine or smthn. But either way, it's nice to know he still wore the same shirt

the colors and print are all faded now, idk just how many times he must've wore and washed it? he must really like that it cuz I wld wear my fav clothes again & again

He really is frugal. So uncelebrity like to be wearing in public the same clothes over and over again. And I love him more for it.

For sure he ain't a narcissist. ?

But the big news is that he met up with Tommy Brown who has worked with the likes of Ariana Grande, Blackpink, Megan Thee Stallion, The Weeknd, DJ Khaled and others in the past. He is also one of the composers of Seventeen's Face The Sun. Fans are happy that BTS member Jimin's first solo album might be out soon. Yay! Also Read - Top Hollywood News Weekly Rewind: Zayn Malik unfollows Gigi Hadid, Johnny Depp in love with lawyer Joelle Rich and more