BTS' Jin aka Kim Seokjin flaunted his toned body and friendship tattoo on his waist for the ARMYs. BTS fans and Seokjinnies are going crazy over the Yet To Come and Run BTS singer's shirtless pictures. 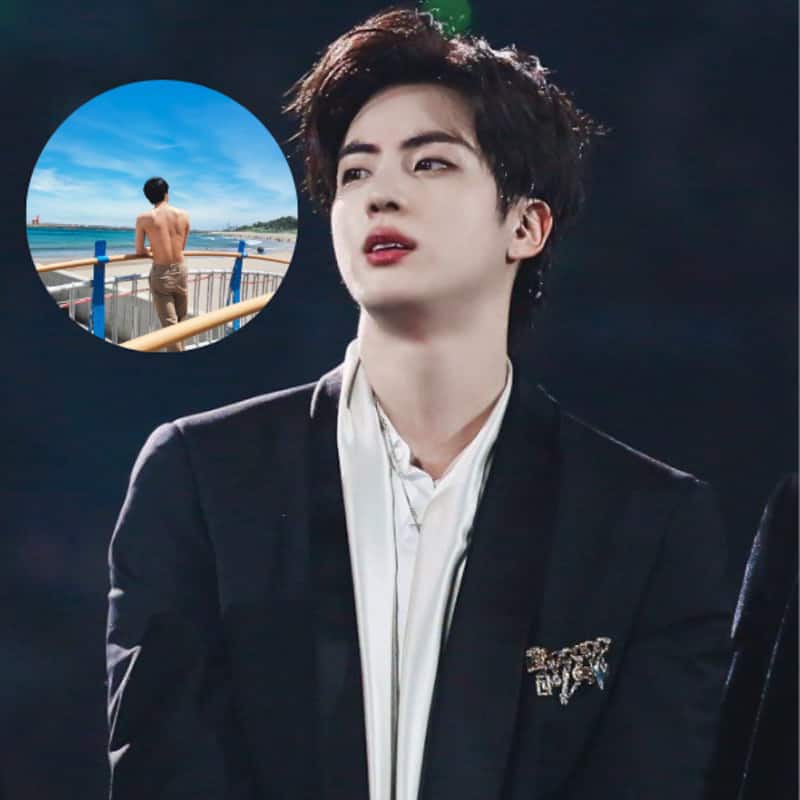 BTS members may be taking a rest, but they have been dishing out content for BTS ARMYs nonetheless. BTS members are going to focus on their individual artistry a little more as they get into Chapter 2. Taking about BTS' Chapter 2, the Bangtan Boys, RM, Jin, Suga, J-Hope, Jimin, Taehyung and Jungkook have decided to get matching friendship tattoos which are number 7. Just a couple of minutes ago, BTS' eldest member Jin aka Kim Seokjin flaunted his tattoo and opened a thirst trap for the BTS ARMY. Also Read - Shah Rukh Khan, Ranveer Singh, BTS Jin and SUGA, Kartik Aaryan - 5 male celebs whose long hair amplified their sex appeal - view pics

Jin took to his social media handle and uploaded a couple of bare body aka shirtless pictures. It was earlier speculated that Jin has got a tattoo on the side of his lower waist and now, finally, BTS ARMY has a glimpse of it. BTS member Jin has inked 7 on his side waist. He captioned the post saying, "I'm also uploading my friendship tattoo," (sic) Check out the post here: Also Read - BTS member Jin's dilemma over food is too relatable but ARMY is busy obsessing over his worldwide handsome looks in PJs [VIDEO]

J-Hope and RM aka Jung Hoseok and Kim Namjoon, who had been online on Instagram were bowled over with BTS Jin's pictures. Hobi laughed and commented, "Holy Moly," with some fire emoticons. On the other hand, RM said that he thought Jin wasn't wearing any pants either and hence he was shocked/surprised. And ARMYs are going crazy on Twitter with Jin's bare body aka shirtless picture. BTS Jin Check out their tweets below: Also Read - BTS may have not won the Grammy Award 2021, but for ARMY they are already the winners — here's why

KIM SEOKJIN HUBADERA ERA IS KDSJJSSJ my breath literally hitched after i saw his post?? pic.twitter.com/Wz72H8iXe5

AINT NO DAMN BODY LOOKING AT THE TATTOO. kim seokjin you menace. i literally thought this day would never come. 26072022. https://t.co/vhhOmsIkWB

I have so much inside but I'm speechless kim seokjin kill me !

I’m outside I can’t do this right now Kim Seokjin ?

You know, you didn’t have to expose your whole upper body just to show us your tattoo Kim Seokjin

BTS members had been discussing getting a friendship tattoo, they've revealed countless times. And finally, when ARMY is getting to see them go through with it. Talking about other members' tattoos, RM aka Kim Namjoon has got a tattoo on the side of his ankle. Hobi inked himself on his shin, back of the ankle. BTS' Jungkook inked himself behind the ear while Jimin got inked on his index finger. BTS V aka is said to have inked himself on his arm between his elephant moles. However, ARMY is still debating over it. On the other hand, Suga aka Agust D is yet to reveal his tattoo or get inked.