BTS' game BTS Island In the Seom was released a couple of days ago. RM, Jin, Suga, J-Hope, Jimin, Taehyung and Jungkook's adorableness is winning ARMY's hearts and how! Watch the tweets here: 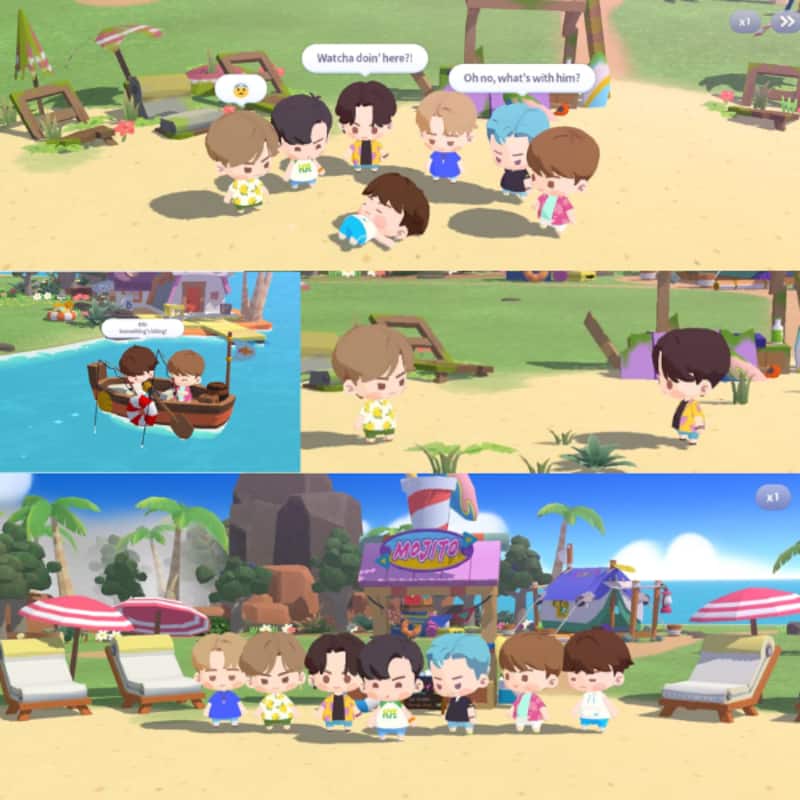 BTS's game show BTS Island In the Seom was released a couple of days ago and the BTS ARMY is hooked and how! RM, Jin, Suga, J-Hope, Jimin, Taehyung and Jungkook's characters in BTS Island In the Seom are winning hearts. Their characters have the same traits as the beloved Bangtan Boys. BTS ARMY cannot stop gushing and crushing over the boys and their new game. Let's check some of the adorable moments of BTS's RM, Jin, Suga, J-Hope, Jimin, Taehyung and Jungkook below: Also Read - BTS: V, Jungkook, Jimin, J-Hope and more - Know the best kept secrets of the Bangtan Boys

Jungkook joins ARMY in playing BTS Island In the Seom

So, ARMY y'all would know what a big gaming enthusiast JK aka Jeon Jungkook is. He is also playing the game and has crossed a couple of levels already. That's not it, BTS ARMY notices that Jungkook is using his money and buying all kinds of stuff in BTS Island In the Seom. Tbh, his Island looks pretty cool. ARMY has been sharing videos of the same online. Moreover, Jungkook's interactions in BTS Island In the Seom with the other members are also winning hearts. Also Read - Trending Hollywood News Today: Kim Kardashian and Kanye West not getting back together, Wednesday trailer ft Tim Burton's Addams Family and more

Jungkook's WORKING on that island fr ? .He's buying everything with money tho and getting endless hearts from fans.... i mean,, it's addicting i get him ? #BTSInTheSeom #BTSIslandpic.twitter.com/O4BWqaH2iu

He bought the rough chairs , the dynamite outfits, the truck and UNLIMITED DIAMONDS and basically living his dreams look at joon roaming shirtless. JUNGKOOK USED HIS MONEY ALREADY. THE ISLAND LOOKS SO GOOD#BTSInTheSeom #BTSIsland pic.twitter.com/If5Z9wvyq4

Suga being Suga in BTS Island In the Seom

Suga aka Min Yoongi's forever sleep and tired trait have been captured in his character in BTS Island In the Seom as well. And ARMYs cannot get over it. His tiny figure falling asleep after doing things such as dancing, building stuff, etc has grabbed ARMYs attention. They even made him perform a pole dance. Suga going fishing with Jin and cooking is also seen in the game. Also Read - BTS: Indian teacher who insulted K-pop band apologises on video after desi ARMY backlash [Watch]

They did say he would be a good pole dancer. Omgaaaaah ??? #YOONGI #SUGA #BTSInTheSeom #BTS pic.twitter.com/O1gttXowO7

This is too funny.... really brings back lots memories from In The Soop 1. ???????????#bts #IntheSEOM #BTSInTheSeom #Jin #YOONGI pic.twitter.com/uFOeuL1Zgy

Yoongi is so precious all he wants is rest and relaxation please let yoongi rest, a genius needs his sleep???#BTSInTheSeom #Yoongi #BTSIsland pic.twitter.com/3Nm4AxjhOh

VMin bond in BTS Island In the Seom

V aka Kim Taehyung and Jimin aka Park Jimin are best friends. They are together in BTS Island In the Seom as well. Their friendship is being lived by the ARMYs in the game too.

Vmin does not surprise me anymore, but Namjoon and his dance steps does ?#IntheSEOM #BTS#BTSInTheSeom pic.twitter.com/SRABRc9Uo8

RM, Jimin, J-Hope and Jin's dance in BTS Island In the Seom

This scene ?? can't stop laughing
RM WAS TRYING TO FIX THE BOAT PROBLEM BUT INSTEAD OF FIXING HE EXPLODE IT ??
& LOOK WHAT MEMBERS ARE SAYING ? #BTSintheseom BTS in the seom #BTS #BTSARMY #BTSIsland #btsislandintheseom pic.twitter.com/0c6mSEa4s2

In the som, choreography is scattered everywhere and it's a lot of fun. Not only the choreography of the song but also the movement that looks like playful is played and everyone is too loved.#IntheSEOM #BTSIsland #BTSInTheSeom pic.twitter.com/V7s5Ut50Ip

The best thing is to fly in the air ???
Mr. Jin makes me laugh so much ???#BTSInTheSeom #JIN pic.twitter.com/Jh3SNEz9F7

when #Hobi #jhope gets angry and throws #JUNGKOOK #JK with bananas #bts #BTSInTheSeom #BTSIsland
?? everything is so detailed pic.twitter.com/APVvox8IrB

Talking about BTS Island In the Seom. The game has got 4.8 ratings on Playstore. More than 1M people have downloaded the game.