BTS' Jungkook's Namaste at the White House has been linked to the gesture of current Indian Prime Minister Narendra Modi. Desi BTS ARMY is going bonkers over Jungkook Ki Sarkar! Check out the video and reactions below: 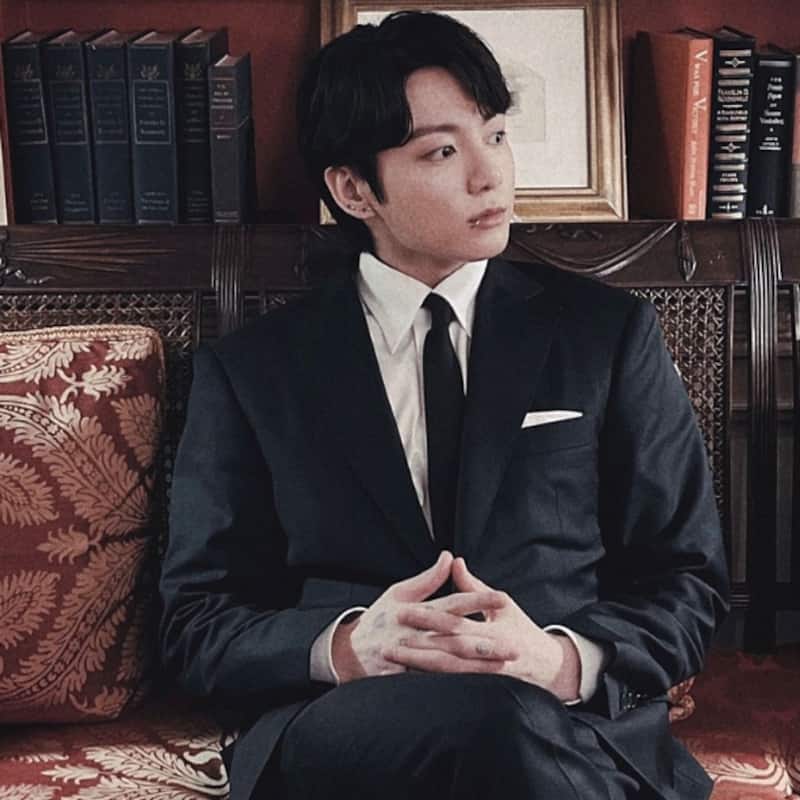 BTS members - RM, Jin, Suga, J-Hope, Jimin, Taehyung and Jungkook - visited the White House last month and met the US president Joe Biden to discuss the anti-Asian hate and inclusivity. And visuals from BTS' White House visit had left the ARMY gushing and crushing, so very hard. BTS aka the Bangtan Boys, all, wore black and white tuxes for the event. They all looked super dapper! Now, we have come across a video clip of Jungkook and his gesture of joining hands, Namaste, has been linked to the gesture of current Indian Prime Minister Narendra Modi. We must say, the BTS ARMY's creativity level is unprecedented. Also Read - BTS: From missing Bangtan Boys together to grooving on Suga X PSY's That That and more: Jungkook's Vlog was a great virtual 'camping' experience for ARMY [Watch]

If you have watched (which you sure would have) the BTS' White House speech premiere, y'all would know how the Bangtan Boys took an exit. For the unversed, Jungkook joined his hand as a gesture of respect to the assorted media personnel who waited for them and patiently listened to their speech. And this few seconds clip has been turned into a goofy video by a Desi BTS ARMY who has given the clip the PM Modi touch. The caption on the video reads, "Jungkook joining hands in the quite house... Meanwhile Indian ARMY's be like: AB KI BAAR JUNGKOOK KI SARKAR." the video has crossed about 1M views already! Check it out here: Also Read - BTS ARMY edits Jungkook's 'Bad Decisions' with Run BTS compilation and it's a laughter riot [Watch Video]

If the creativity level of the ARMYs is unprecedented, wait till you read the comments on the video. One of the ARMYs said that they have already voted! Another one said that JK is distributing free Banana Milk for the same. A lot of the BTS ARMYs have been discussing voting options and are being goofy that he will be the next PM. Banana Milk has been declared the party symbol! One of the ARMYs also said a slogan, "Humara neta kesa ho, Jungkook jesa ho!" It's super fun reading the comments. Check them out below: Also Read - BTS ARMY trends 'JUNGKOOK CAME HOME' as he returns on Instagram to praise J-Hope's Lollapalooza concert [View Tweets] 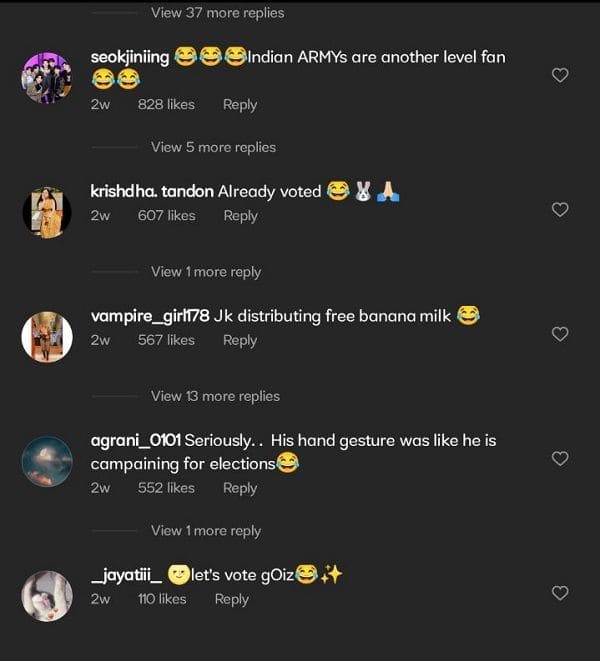 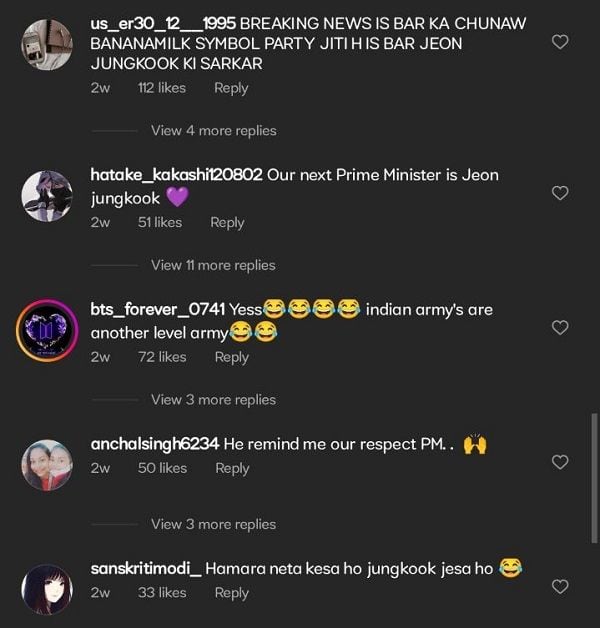 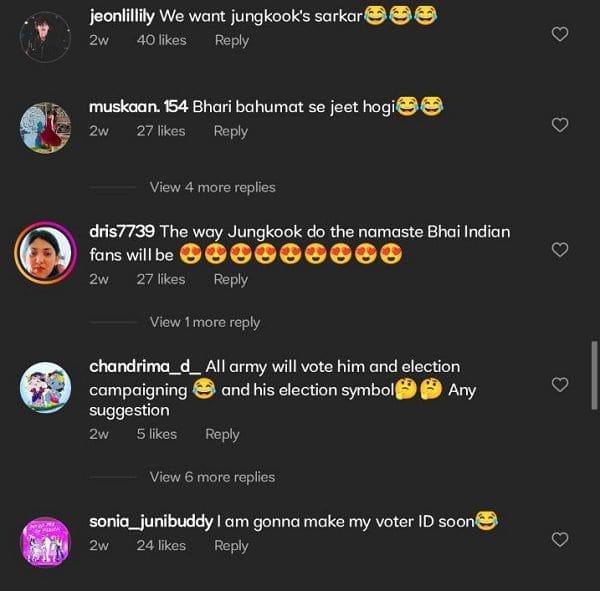 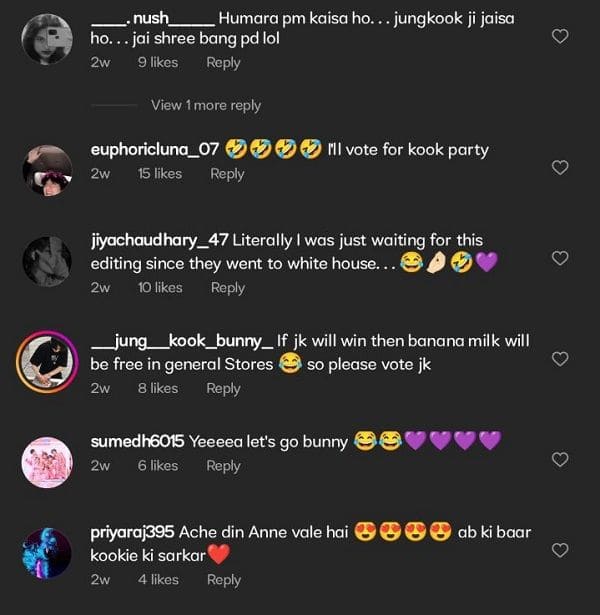 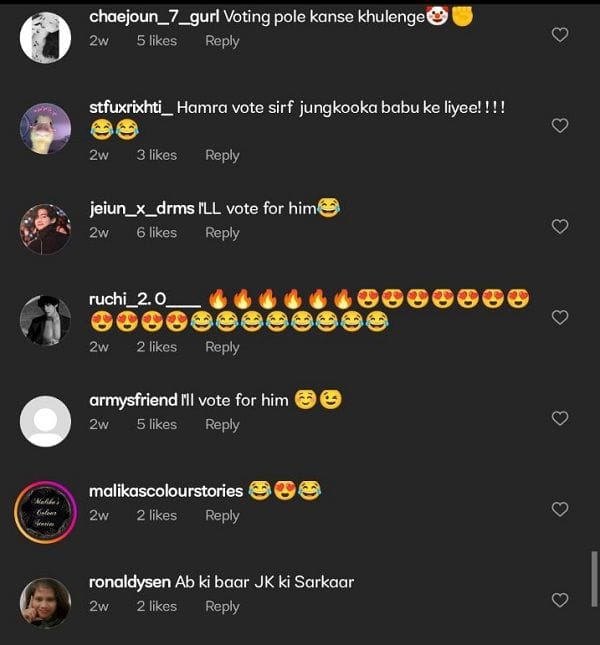 For now, Jungkook has announced only one solo project with Charlie Puth. It's called Left and Right and it's dropping on 24th June 2022. On the other hand, Jungkook grabbed headlines for his appearance at MNet, Music Bank and Inkigayo along with his Hyungs.