BTS' Kim Seokjin aka Jin leaves for US for personal schedule; ARMY, gear up for Bad Decisions singer's solo work

BTS' eldest member Jin was snapped at the South Korean international airport couple of hours ago. BTS ARMY is now gearing up for the solo work of Kim Seokjin. As far as his airport appearance goes, ARMYs are gushing over him. 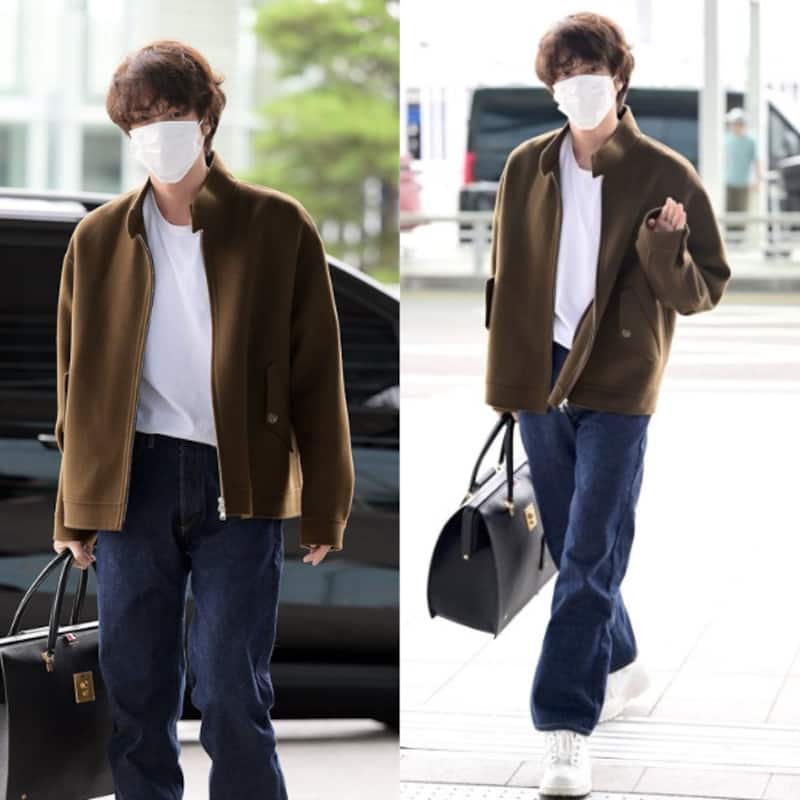 BTS' Kim Seokjin aka Jin jetted off to LA for his personal schedule. The eldest member of BTS was snapped in casuals all by himself. The vocalist of BTS, Jin's fluffy look went instantly viral and ARMYs poured in wishes for him to have a safe flight to the US. BTS members had announced hiatus a couple of weeks ago and ever since they have been spotted on their personal solo schedules a lot of times. This time, BTS' Jin aka Kim Seokjin was spotted at the South Korean International airport heading to LA, US, as per K-media reports. Also Read - BTS: Jin aka Kim Seokjin takes us through the Super Tuna journey; his unbridled excitement on catching a real bluefish tuna is unmissable

BTS' Jin heads to the US for a schedule

In Hollywood News today, worldwide handsome Jin was spotted at the Incheon international airport heading out of the country for his personal work schedule. The Run BTS singer was seen in a dark jacket with blue denim and a white tee. He teamed his outfits with white sneakers and a black tote bag. Kim Soekjin's ruffled hair left ARMY speechless. Moreover, despite being in a mask, Jin looked very handsome, we guess it was because of his curly locks. Also Read - BTS: Kim Taehyung and Jungkook hang out with Parasite star Choi Woo-Shik and his brother at a bowling alley [View Pics]

HAVE A SAFE FLIGHT JIN MY BABY OMG I'M SO EXCITED FOR YOU!!!? pic.twitter.com/MrrQhyXkzI

seokjin turn around to bow and even made eye contact with this reporter, so lucky ?

HAVE A SAFE FLIGHT JIN pic.twitter.com/AsxK8maNn0

have a safe flight Jin pic.twitter.com/VT1M4BPtut

Jin to work on a solo album in the US?

If reports are anything to go by, it is being said that Jin is heading to LA. The South Korean Video production company Lumpens' director and BTS' creative director were also spotted at the airport, state media who went to cover Jin's departure at Incheon airport, as per a tweet by an ARMY. It is likely that Jin might have flown to the US to work on his solo schedule. However, there's no official confirmation of the same as of yet. Also Read - BTS: Jin aka Kim Seokjin is the cutest drunk ever on Youngji's show; The Astronaut singer makes surprising revelations

No official reports but Dispatch is currently live and says that Kim Seokjin will depart for LA. Lumpens and BTS' Creative Director is also there. He might go to film something for his solo album! #Yours_Jin #SuperTuna_Jin #JIN #BTSJIN @BTS_twt

Talking about his airport appearance, Jin was as gracious and a sweetheart as he always is. He greeted the waiting media and the ARMYs with bows and also waved at them.