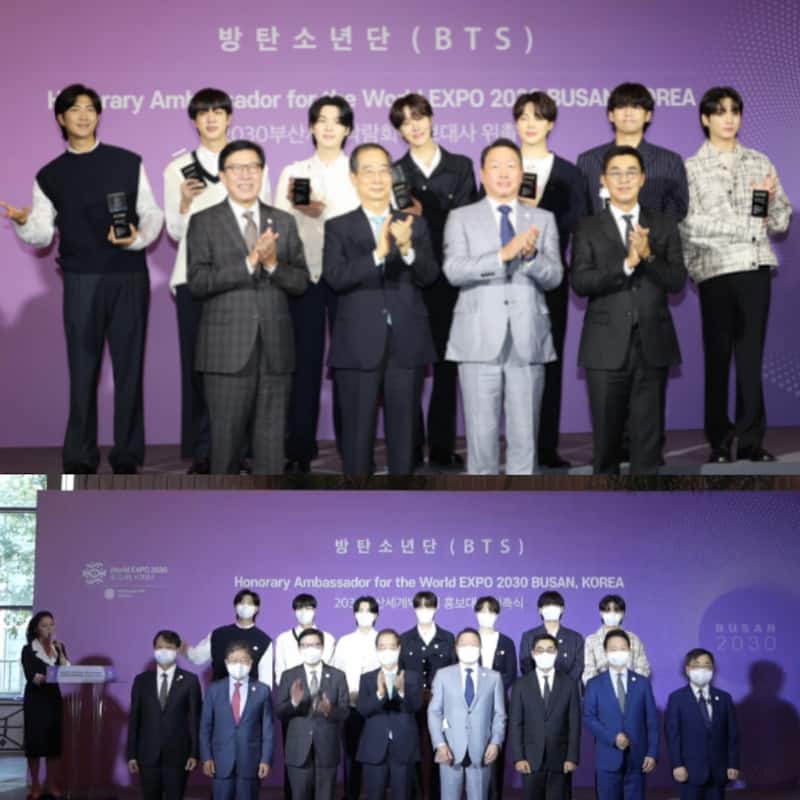 It is indeed a proud moment for BTS and BTS ARMY as the Bangtan Boys have been appointed as the ambassadors for one of the prestigious events, a world fair. South Korea is one of the countries that are participating in the event. Other participants include Italy, Ukraine and Saudi Arabia. While Busan is the city for the bid, Rome, Odessa and Riyadh are the cities nominated for the bid. BTS will be ambassadors to help promote the bid for Busan to hold the World Expo 2030. Also Read - Kim Taehyung-Jennie dating rumours: HD version of edited pic goes viral after BTS V shares video with his pet Yeontan; fans react [View Tweets]

BTS' videos and pics from the appointment ceremony go viral

BTS members - RM, Jin, Suga, J-Hope, Jimin, Kim Taehyung and Jungkook's pictures and videos from the BTS' honourary brand ambassadors' appointment ceremony for Busan's bid at the World Expo 2030 are going viral. From making hearts to getting honourary trophies for the same, ARMYs are tripping mad over the proud moment of BTS. It is indeed another feather in their already adorned cap. BTS making their country proud in their very own country is indeed special. Meanwhile, one of the most loved videos on the internet from BTS' ambassador appointment ceremony is the heart gestures that the Bangtannies did. Check out the videos and pictures of BTS' RM, Jin, sugar, J-Hope, Jimin, Taehyung and Jungkook here: Also Read - BTS: Jungkook Nose Challenge leaves artist ARMY in tizzy; call him 'ninth wonder of the world' [View Tweets]

SO PROUD OF THEM @BTS_twt pic.twitter.com/HBqDpVNktm

? It's truly an honor that we, BTS, were appointed as the ambassadors for World Expo 2030. We'll put our efforts and do our bit so that the World EXPO 2030 can become 'Busan' World EXPO 2030. Starting from the global Busan concert in October, we'll do various activities to+ pic.twitter.com/07pydpQkeY

.@BusanCityGovt Mayor Park Hyeong-joon: I know @BTS_twt's RM loves Busan, and that Jimin and Jungkook are from Busan as well. I heard the band is preparing for a bigger concert than the one in Los Angeles. I think hundreds of millions of BTS fans will respond to @2030busanexpo. pic.twitter.com/bEKyvw80Vo

All the seven bandmates of @BTS_twt will be ambassadors for the country's effort to bring the biggest fair in the world to @BusanCityGovt, the second largest city in South Korea, Jungkook & Jimin's hometown. On the sidelines, the band will also hold a concert in October. ?#BTS pic.twitter.com/ZKpJZVjjaX

All the seven bandmates of @BTS_twt will be ambassadors for the country's effort to bring the biggest fair in the world to @BusanCityGovt, the second largest city in South Korea, Jungkook & Jimin's hometown. On the sidelines, the band will also hold a concert in October. ?#BTS pic.twitter.com/ZKpJZVjjaX

Wearing a decent high quality mask in public is a nice thing to do. People in some countries do that routinely, while we have to wish for it. BTS members, Busan, S Korea, 7/18/2022. pic.twitter.com/GgqXdUURvt

Everyone has their own award, with their real name

As the ambassadors, BTS members will be holding a large-scale concert in October in an effort to get the bid in favour of Busan. It will be broadcasted live on YouTube as well. Apart from that, BTS intend to be a part of various activities to help in the same. Jungkook and Jimin hail from Busan, and we bet, this is one of the proudest moments of their lives.