If you ever wonder to be as stylish as BTS, be ready to burn a Bermuda triangle in your pocket as once the money goes, poof, it's just gonna disappear forever. Let's have a dekko at the style files of BTS for the Permission To Dance on Stage online concert.

For the PTD soundcheck, Joonie wore a Fear of God hoodie which he paired with black tracks. The hoodie itself costs $695. For the concert, he first wore a see-through tank top/ganji. He teamed it up with a jacket from Rick Owens from its Spring Summer 2022 collection. He paired the same with Drawstring Cropped Trousers from DRKSHOW, the cost of which is over $1,000 USD. Talking about his accessories, he opted for a Double Link Choker which costs $315, Rick Sunglasses which costs $619. He wore the super stylish Geobasket High Top Sneakers that comes at a price of $1,170. His other costume consists of Casablanca, a Terry Track Jacket costs about $708. He wore a La Course Ideale Shirt $926. Check out the price of the same here: Also Read - BTS LA PTD Concert: ARMY thirsting over Jungkook's shirtless backstage video, Bam getting LOVE and more – Golden Maknae's priceless moments from SoFi 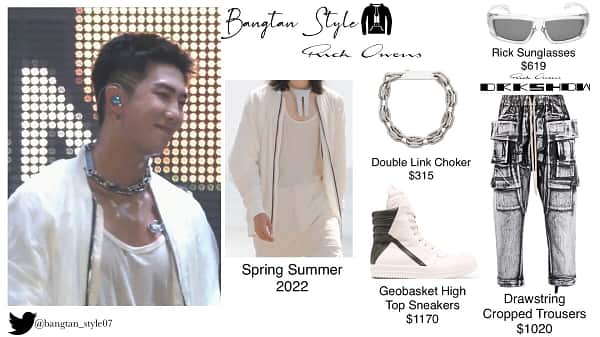 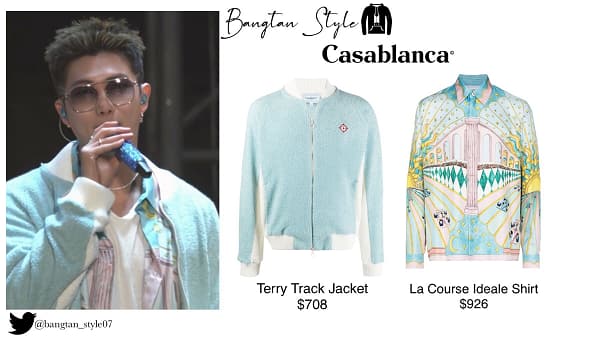 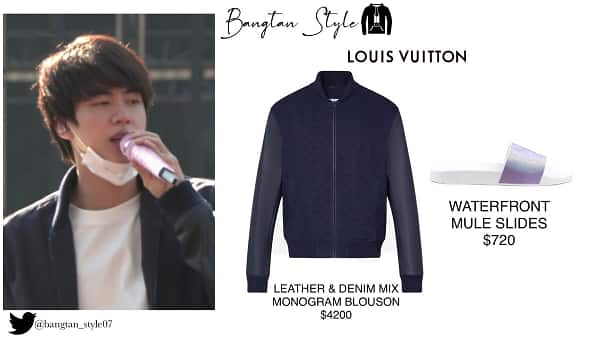 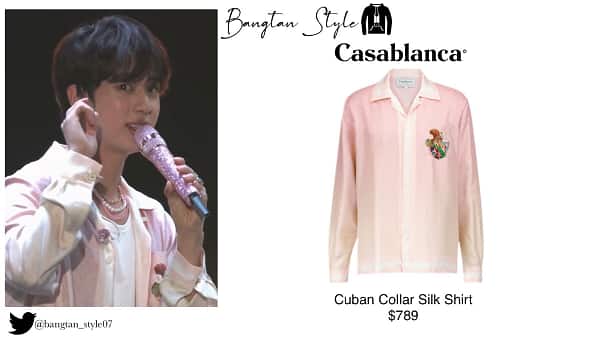 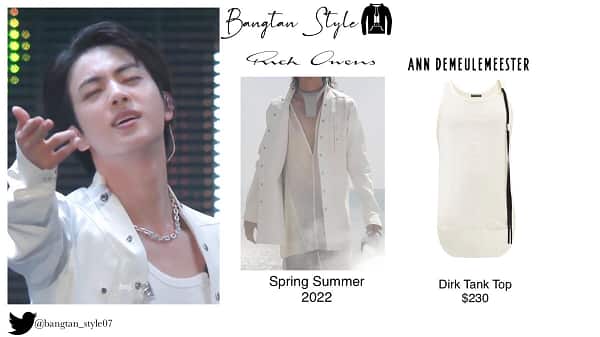 For the PTD soundcheck, Suga wore a Mihara Yasuhiro distressed sweater that he teamed with a Leather-Trimmed Cargo Trousers from Fear of God. They cost about $680 and $755 USD, respectively. He wore a knit cap from Y&M which costs $16 only. The rapper wore the Baker Low Top Sneakers from Mihara Yasuhiro again that ranges from $430. Unlike the two above, Suga wore Hyein Seo's Aviator Bomber Jacket that costs $855 and Eclipse Cargo Pants that costs $330. He teamed it up with Ann Demeulemeester's dirt tank top like Jin. His accessories include an Edge Oval Chain from Wooing by Connie Woo for $154. He also wore a customer made iced out Cuban link from Quantez. He also wore a Casablanca multicolour print jacket which costs $915. Finally, he wore a bomber jacket and a bucket hat, the official PTD Merch for $101.26 and $41.80. 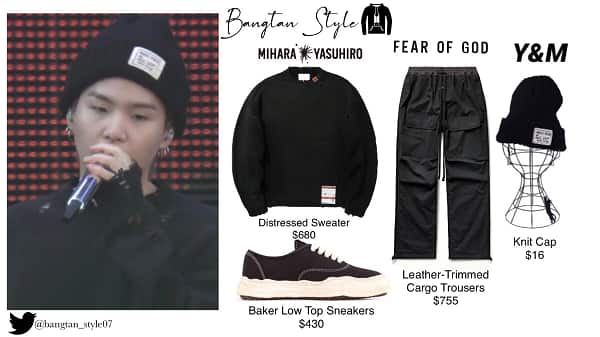 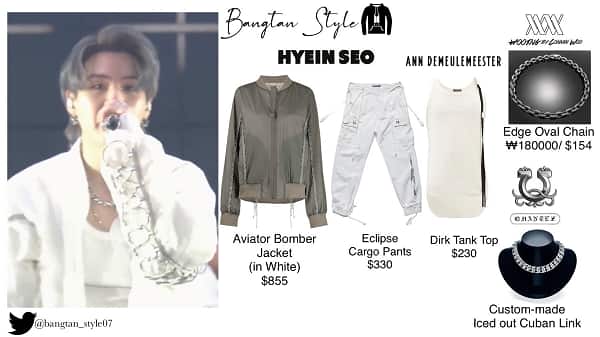 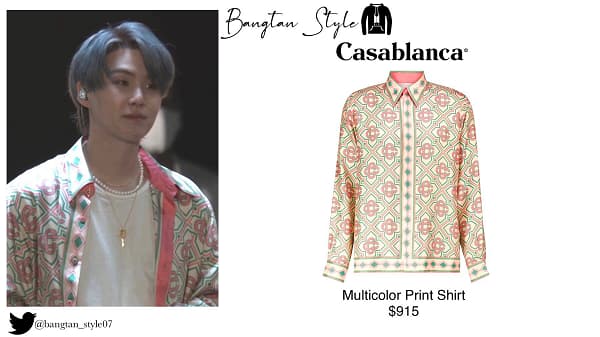 For PTD soundcheck, J-Hope wore Louis Vuitton’s Monogram Waves Infinity Pareo Scarf that costs $450. He wore a cashmere beanie from Chrome Hearts which costs $395. His OTT sunglasses from GENTLE MONSTER‘s “swipe” collection will come out in 2022. Whereas his Funky Tennis Loafers by FILA costs $152. For the concert’s first look, he wore a Gary Flightsuit from Rick Owens. The price range of the same is around $912 to $2,567. His accessories include a custom-made hand armour from 32 Dawn. He completed his look with Eliot Sunglasses from Burberry that costs $315. Hobi’s second outfit was almost entirely from Casablanca. He wore the pink high-waisted trousers that cost about $1,000. He teamed it up with the Window Print Silk Shirt that prices $815 and the Belted Single-Breasted Jacket which costs $2,378 USD. The blue puffy bucket hat was from KHRISJOY which costs $275. Last but not the least, he wore the PTD merch as well. Hobi was seen in a T-shirt and a zip-up hoodie that costs about $45.52 and $82.68, respectively. His accessories include a beret for $39 and a neckpiece for $37.16. 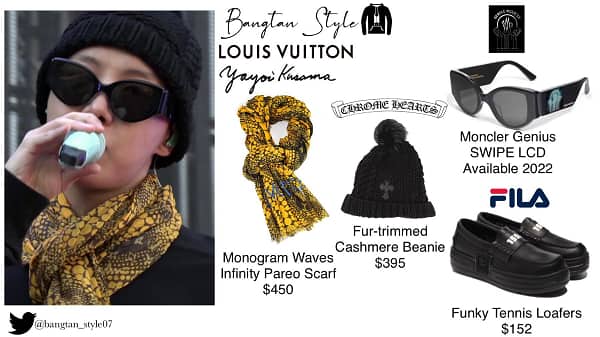 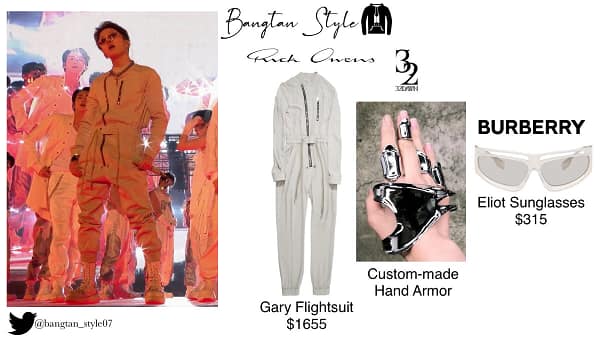 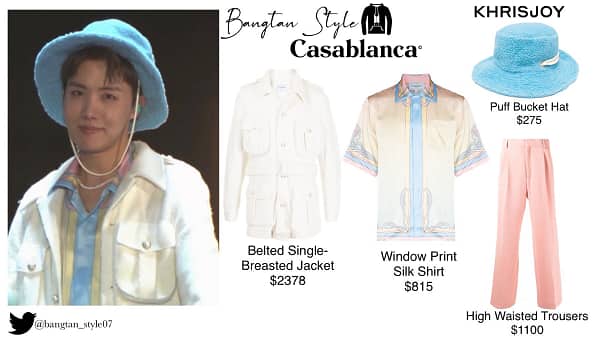 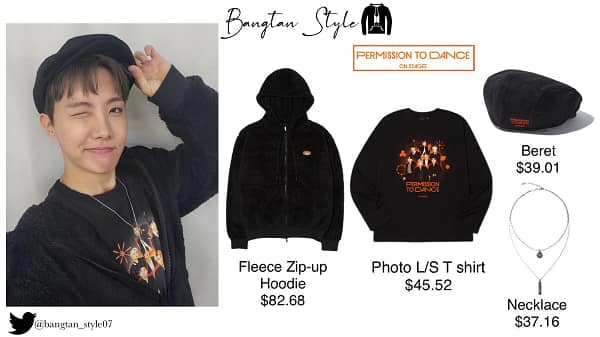 For the PTD soundcheck, Jimin opted for a crewneck sweater from Bottega Veneta that costs $890. He opted for the PTD hoodie that costs $82.68. For the accessories, he wore Tiny CH E Plus earrings from Chrome Hearts and it costs $1,442. For the concert, Jimin stole hearts in a knit tank called the Moon Palace Knit from Hyein Seo. It costs $395. The wool knit is also from the brand. He wore monolith combat boots from Prada which costs $1,550. His next outfit is from Casablanca. He wore a 70’s Laurel Embroidery Denim Jacket that costs about $1,100. He teamed it with a couple of sets of pins from Toga Virilis for $117 and $160 USD, respectively. The attention catcher Romantic Vintage Pearl Necklace by Vintage Hollywood is for $148 USD. To top it up, he wore the Shearling Baker Boy Cap from Ruslan Baginskiy that costs $240. 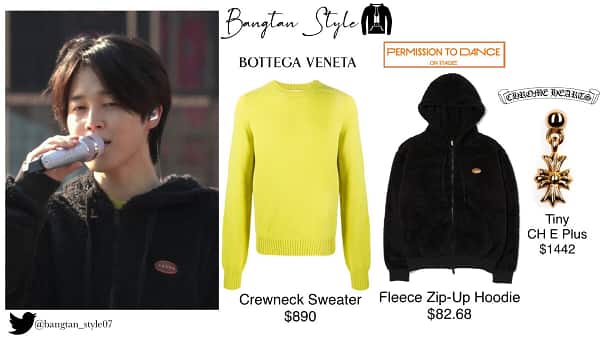 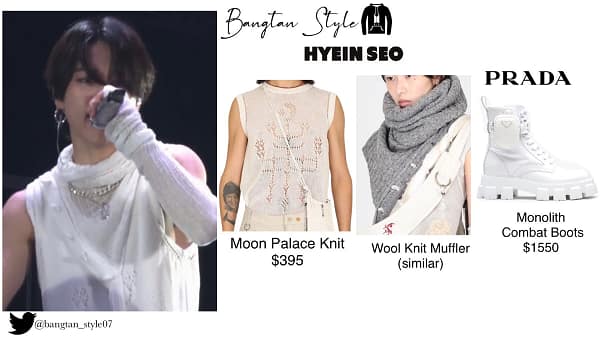 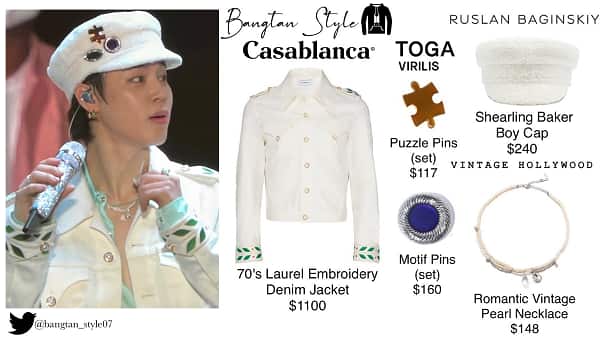 For the PTD, soundcheck, V wore the official merch, a beret that costs about $39. He teamed it up with the Bumper Low Top Sneakers from Lanvin that costs about $550. He wore a grey pullover jacket that he teamed with an olive cashmere tee. His concert look consisted of Rick Owens’ upcoming collection. He accessorised himself with Rectangular Frame Sunglasses that cost $740 and a Double Link Choker that costs $315 USD. For his next look, he wore Casablanca. He opted for a Geometric Print Zip Up Bomber Jacket that he paired with the Shell Chantilly Lace Shirt which costs about $1,527 and $800, respectively. The Geometric Print Tie completed his look at the cost of $282. 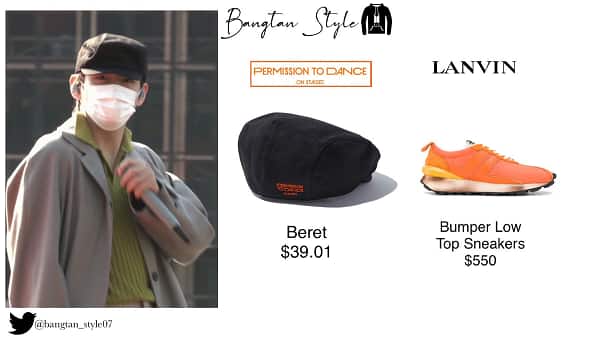 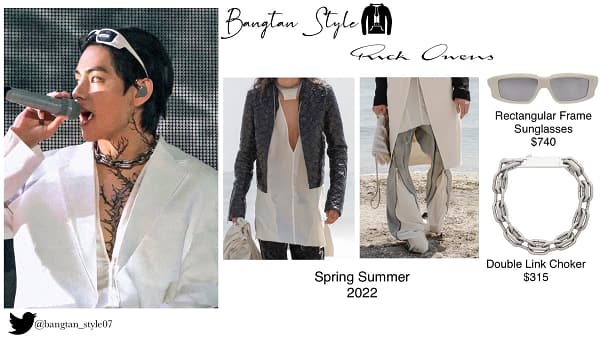 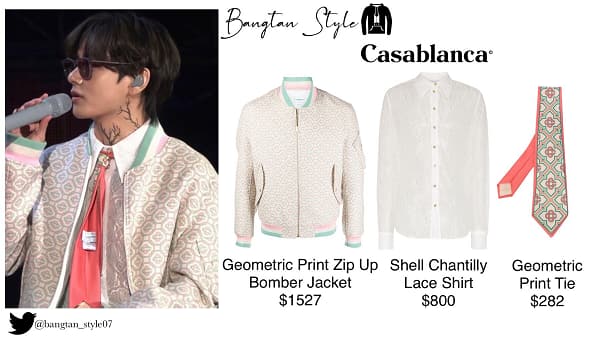 For the PTD soundcheck, Jungkook wore Supreme‘s Bandana Faux Fur Bomber Jacket that costs $398. He teamed it with a Netting Knit Vest in black from DWS Company for $44. He accessorised himself with Choice YJ C1 (BR) sunglasses from Gentle Monster and PETERSON OG Sole Canvas Low-top Sneaker from Mihara Yasuhiro for $330 and $271 USD, respectively. For the concert, he paired the Membrane Tank Top with the Dylan Cotton Jersey from Rick Owens. Its cost was about $350 and $315 USD, respectively. Next, he wore a Wavy Zip Up Jacket from Hyein Seo that costs $450. The accessories were from Wooing by Connie Woo which cost $145 and $170 each. Furthermore, he wore a pairing of two Casablanca shirts. The first included a sheer graphic-print mesh top and the Art of Racing print shirt for $811 and $833 USD, respectively. He teamed them up with straight-leg tailored trousers that cost $1,100 USD. 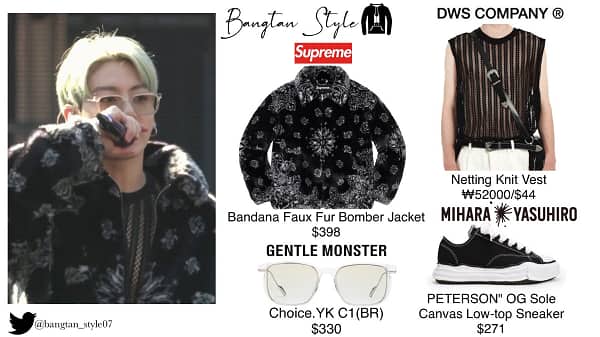 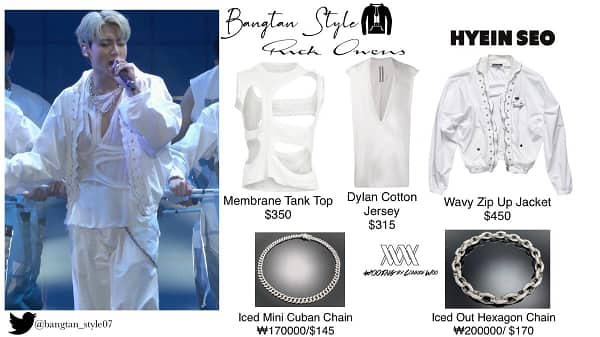 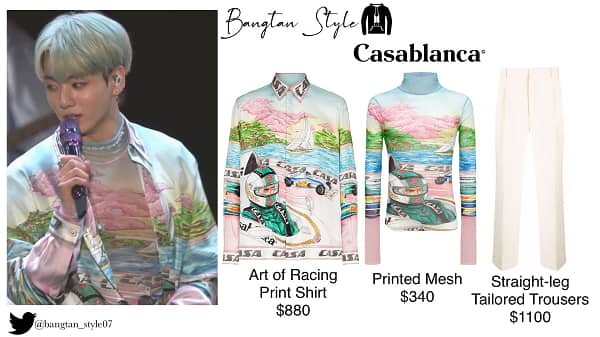