BTS Poll: ARMY declares THIS member as the most stylish among the Bangtan Boys - view verdict

BTS ARMY has picked the most stylish member of the band. The poll results are pretty interesting, we must say. Read on.

K-pop band BTS comprises of seven members and oh my, all of them are super dashing and cute. Jungkook, J-Hope, RM, V, Jimin, Jin and Suga are among the most favourite boys and we must say, these boys do not have to put in a lot of efforts to look stylish. On that note, we recently conducted a poll asking ARMY ( BTS fans) - whom do they find to be the most stylish one among the Bangtan Boys? The results are out! Also Read - BTS ARMY, V aka Kim Taehyung' prince avatar will leave you swooning – check out irresistible pictures 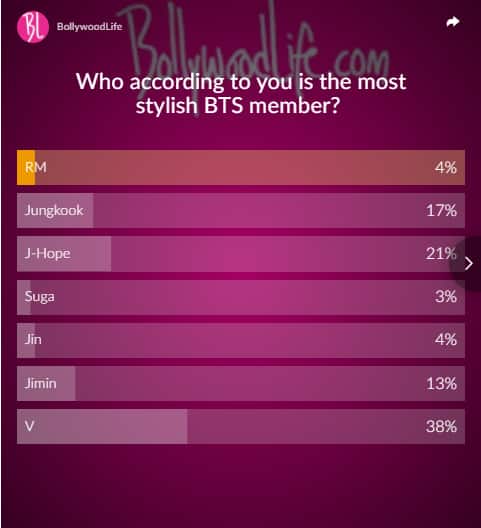 Not just on our poll, in the past, BTS' V was also chosen to be the best looking man in the world. He topped the list of Besttopper.com’s Top 10 Most Handsome Men in the World beating Brad Pitt, Robert Pattinson, Chris Evans, Hrithik Roshan, Tom Cruise and other big stars. This proves that not just for music, V is loved by all for his impeccable fashion sense too.