BTS members Kim Taehyung and Jungkook are the talk of the town right now. And it is because some pictures of BTS V and Jungkookie are going viral on Twitter. Let's check out below: 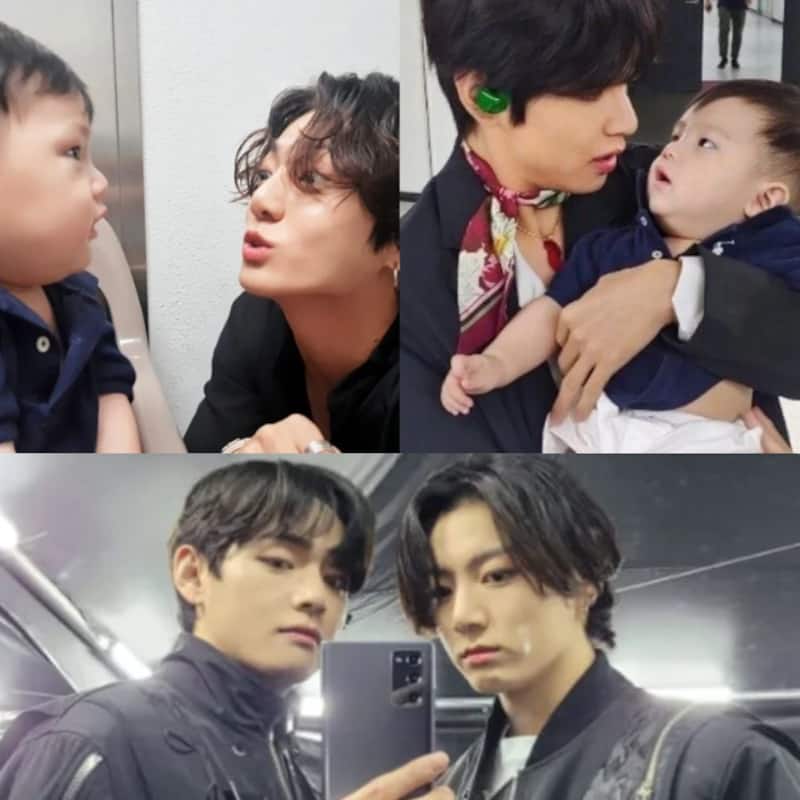 BTS is one of the most popular boybands across the globe. It has a massive fan-following too who are called ARMY. The fandom is very protective and supportive of the Bangtan Boys – RM, Jin, Suga, J-Hope, Jimin, Taehyung and Jungkook. The fans love the bonding between each member. They have groups/units called vocal line, hyung line, rap line, maknae line and so on. Sometimes, fans ship the bond between two members and one of the most popular on is currently, Taekook. The two youngest members of BTS, Kim Taehyung and Jeon Jungkook have a separate fanbase. And right now, Taekook is trending big time. Also Read - BTS: Kim Taehyung, Jungkook and other members turn Akshay Kumar, Suniel Shetty from Phir Hera Pheri as they groove on 'Aye Meri Zohrajabeen' [Watch Hilarious Video]

BTS members Kim Taehyung and Jungkook are known as Taekook together. They are the talk of the town right now because of two pictures that are going viral. It has sent the whole fandom into a tizzy. Taehyung and Jungkook are seen with the kid of their manager's son. Hobum Song took to his social media handle and shared a picture of his son with the Bangtannies together. In the first picture, we see Jimin holding the little one while the boys pose. The second picture is of Jungkook playing with the cutie and the third picture is of Taehyung holding Hobum Song's son. Also Read - BTS: V aka Kim Taehyung and Jungkook ace the Run BTS TikTok trend; Big Hit Music reveals their hidden talents

Currently, Taehyung and Jungkook stans are going gaga over their solo pictures with the baby boy of Hobum Song. Taehyung and Jungkook have a massive fanbase together. They ship them together and how! Their bond is widely adored amongst the BTS ARMY. Check out the tweets here: Also Read - BTS: Kim Taehyung aka V gets mobbed by ARMYs as he returns home; pens a note saying, ‘I always get worried…’

Taekook will have the most beautiful family, together they will be the best dads...?????#TaekookIsReal #taekook #taekookmarried pic.twitter.com/0tBNQQqLvV

They're so gentle with kids and that makes them the best with kids ??#taekook pic.twitter.com/MHJCEhCbLE

TAEKOOK WITH BABY ?
my heart cries ? they're just too perfect a couple ??#taekook pic.twitter.com/QgKWOd3CdS

This is the sweetest thing in the world! You are beautiful ...???#taekook
WE LOVE YOU TAEKOOK pic.twitter.com/XUWZaB25mi

My heart is melting!!! Oh gosh #taekook ?? and that baby is so freakin ADORABLE!! pic.twitter.com/0KP4Ya5hP7

#Taekook with baby? I am so soft? pic.twitter.com/pxWWhhe5xs

On the work front, Taehyung and Jungkook are working on their solo stints. While Jungkook has featured in Charlie Puth’s Left and Right. There’s a buzz that he and RM are working on a song with an American artist. On the other hand, Taehyung revealed that he erased all the songs from his album. However, he is currently working on them right now.