BTS Throwback: RM, SUGA, Jin and co's most embarrassing video that made them cringe and how

BTS Throwback: Here is a look at the old video that made RM, SUGA, Taehyung Jimin cringe so hard and ARMYs laugh their hearts out 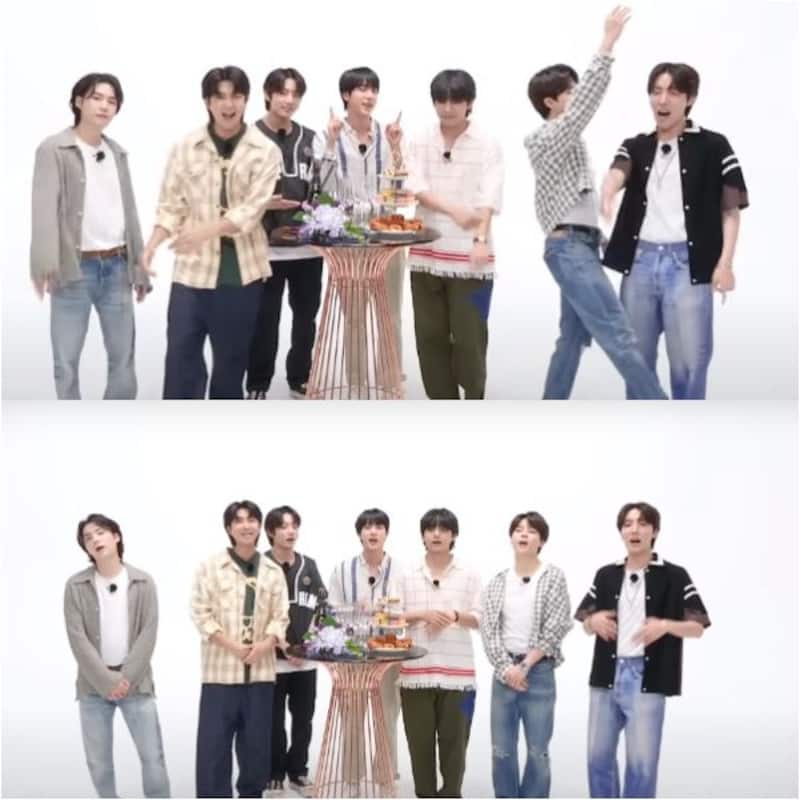 BTS is now reigning over the world and their fandom is growing by the day. We know them as musicians, UN speakers, brand ambassadors but there was a time when they were a budding group. They have been to TV shows where they have been asked all sorts of awkward questions but there is one video where the boys are seen professing their love for their dream woman. They are saying typical cheesy lines in a bid to act as romantic heroes. While the video is quite old, the boys have extreme reactions on the same. SUGA literally falls off his chair when he sees the video. Also Read - Trending Hollywood News Today: BTS member Suga nails long hair look, Kim Kardashian struggles in a bodycon dress and more

While it is nothing like the infamous computer virus statement made by J-Hope, it is still quite hilarious. RM looks the most embarrassed when someone shows him the video. Kim Taehyung jumps out of the chair. The boys are seen saying the cheesiest lines ever. Also Read - BTS: Ahead of Kim Taehyung's stint as DJ on Radio show, here are 6 BIG REVEALS to charge you up for more interesting tea tonight

Fans love this video as it makes them laugh like anything. The hairstyle of the boys is also very funny. Like just check out Jungkook's video. Old ARMYs feel J-Hope aka Jung Hoseok did the best in this video. The Bangtan Boys have always said that they refrain from talking in lovey-dovey language. In 2021, SUGA literally screamed after hearing Taehyung say Sarangheyo to Jimin on a TV show. Also Read - BTS: Min Yoongi aka Suga leaves for Japan; ARMY cannot stop raving about his long tresses [View THIRST Tweets]

BTS aka Bangtan Boys are set to perform in Busan in October 2022. The city is making a bid for the World Expo in 2030 and the concert is a part of the endeavour. It seems HYBE has not charged anything to the organizers as it is an effort to promote Busan and the country as a whole. They are still figuring out the venue. J-Hope aka Jung Hoseok delivered a stellar act in Lollapalooza Chicago leaving everyone awestruck. BTS aka the Bangtan Boys are the most successful music group to come out of Korea.