BTS' V aka Kim Taehyung reached the JFK airport, New York City wherein fans had been waiting to catch a glimpse of the Run BTS singer. However, an incident shocked the ARMY. 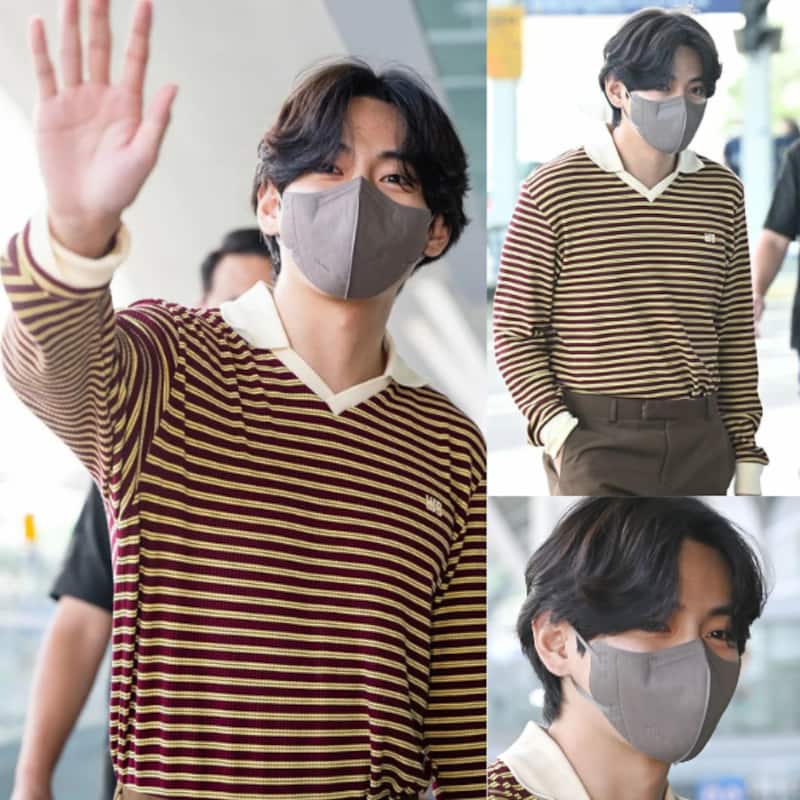 BTS V aka Kim Taehyung has reached New York for his personal overseas schedule. A couple of hours ago, BTS member Kim Taehyung was snapped at the Incheon International airport, looking very smart in trousers and a striped shirt. He was his charming and adorable self even with the mask on his face. BTS ARMY wished him to have a safe flight. And now, the Run BTS singer has reached New York. A video clip of Kim Taehyung is going viral on social media and ARMY is worried about Taetae. Also Read - BTS: Kim Taehyung, Jungkook and other members turn Akshay Kumar, Suniel Shetty from Phir Hera Pheri as they groove on 'Aye Meri Zohrajabeen' [Watch Hilarious Video]

As y'all know, BTS aka the Bangtan Boys - RM, Jin, Suga, J-hope, Jimin, Taehyung and Jungkook - are quite famous. Whenever either of them or the whole group is spotted at the airport, there is not just a lot of media around but also a lot of fans, ARMYs. It's sometimes quite a scary situation when the fans throng the boys to get a glimpse of them or click a selfie or get a good look at them, at the very least. And that's what happened at the New York airport. Taehyung was walking alongside the bodyguards and some girls were about to trip and fall off while moving alongside the train that was taking BTS V aka Kim Taehyung out of the airport. V saw and waved that them to be careful. Check out the video here: Also Read - BTS: V aka Kim Taehyung and Jungkook ace the Run BTS TikTok trend; Big Hit Music reveals their hidden talents

This is unbelievable,istg it looks like they gonna jump over him?thank god there were bodyguards tho!!

He’s the sweetest?look at taetae asking them to be careful?

BTS ARMY gets worried for Taetae

BTS ARMY who've seen the video are worried for Taehyung. They are scared that the fans, in their excitement are causing such chaos at the airport. While they have also praised Taehyung for always being so kind towards the ARMY, they are now worried for his safety. Taehyung is always a part of trending Hollywood News. Check out the tweets here: Also Read - BTS: Kim Taehyung aka V gets mobbed by ARMYs as he returns home; pens a note saying, ‘I always get worried…’

You guys give me anxiety

this girls is really something but i love Tae more on this coz he never forget to remind this girls to be careful even their doing is so annoying.

We must protect him and all the boys at all cost!! Poor Taehyung! Glad he is okay tho and the bodyguards helped.

It would be really great if people could contain them selves. Seriously there is no reason for running up on him like this. Stand yer ass back and let him make it safely out of the airport.

V literally told army’s and posted himself on Weverse. It would be private if he himself didn’t tell us. By posting on Weverse he made it public.

Previously, the Christmas Tree and Bad Decisions singer had shared shocking deets about how Sasaeng fans would book tickets beside their seat. This was back when the boys would travel on commercial flights. The boys couldn't relax during travelling hours and the whole journey would get uncomfortable.