BTS: V aka Kim Taehyung to have In The Soop special along with Park Hyung-sik, Park Seo-joon, Choi Woo-shik and Peakboy [ARMY REACTS]

BTS V aka Kim Taehyung and other Wooga Squad members -Park Hyung-sik, Park Seo-joon, Choi Woo-shik and Peakboy. K-drama and K-pop lovers are going bonkers over the thought of seeing the five most popular celebs together.

OMG BTS ARMY, so much content coming up of BTS members, solo and together too! And the latest buzz that’s hit the K-pop town is BTS member V aka Kim Taehyung is going to feature in a special series of In the Soop with his Wooga squad – Park Hyung-sik, Park Seo-joon, Choi Woo-sik, and Peakboy. Yep, you read that right! The latest report in Kpop Herald says so and it’s got everyone helluva excited. BTS ARMY and the K-content consumers are tripping over the mere thought of getting to watch five handsome men in one frame and being the goofballs that they are. Also Read - BTS' Kim Taehyung, Blackpink's Lisa and Park Bo-gum steal thunder at Celine's Fashion show in Paris, V interacts with Eddie Redmayne and more

BTS V and Wooga Squad’s In the Soop

Kpop Herald tweeted out that V is launching an ‘In the Soop’ series with his friends. It will be a spin-off of BTS In the Soop and feature Wooga Squad members – V, Park Hyung-sik, Park Seo-joon, Choi Woo-sik and Peakboy. Together, these five popular celebrities form the Wooga Squad. BTS In the Soop has had two seasons till now. It includes the septet – RM, Jin, Suga, J-Hope, Jimin, V and Jungkook, spending time together, chilling and doing what they love. And the new ‘In the Soop version’ will feature five most popular Korean celebrities. It has got not just the ARMYs but also the K-drama lovers super excited. Check out the tweet here: Also Read - BTS V aka Kim Taehyung is enjoying Paris in style; ARMY goes gaga over his aww-dorable pictures 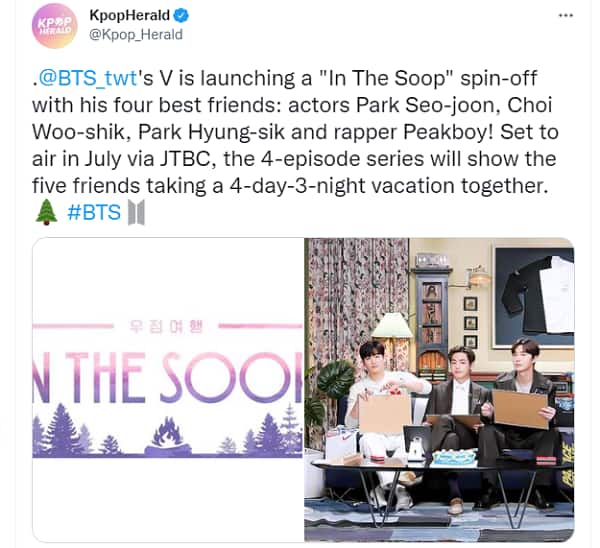 As per K-pop Herald, the spin-off of In the Soop featuring the BTS member, the soundtrack No 1 actor, Itaewon Class actor, Parasite star and rapper Peakboy, will air on the JTBC network in South Korea. The series will have 4 mini episodes wherein the celebrity guests will spend 4-days and 3-nights together. No details about how the ARMY and K-drama lovers outside SK will get to watch. Maybe, it will be released online like the BTS In the Soop content. We have to wait for official confirmation.

Ever since the tweet surfaced, everyone is going crazy over the content they’d get to see in the upcoming months. They are super happy as they’ll get to see the individual content of every BTS member. Be it in the form of mixtapes, collaborations, Hobi’s Lollapalooza and more. They are super stoked about watching Wooga Squad in special series of In the Soop. Check out the tweets below:

They were not kidding when they said that chapter 1 of BTS' career just ended and a new one begins. Starting by july we'll be getting a lot of the member's solo agendas ?

After hobi go to lollapalloza , v in the soop, JK with charlie puth and more to come…

OH YM GOD THIS IS SONEXCITONG

Hmmm all those posts about golfing… together? ???

IM SO EXCITEDDDDD !! MY FAVOURITE PEOPLE IN 4 EPISODE OMG!!!! pic.twitter.com/85g6qAR8rD

This is gonna be so entertaining lol

What is Wooga Squad?

In a video, V aka Kim Taehyung had explained that the word Wooga is a short form for the word ‘Woori-ga gajok-inga?’ which translates to ‘Are we family?’. They are real-life brothers even though they don’t share the same blood.