Did BTS Jin enjoy dosa in Jeju? Desi Bangtan ARMY is confused and it's hilarious AF

BTS Jin gorges on hairtail fish in Korea's Jeju Island....Here is why desi ARMY felt the food item was like a dosa 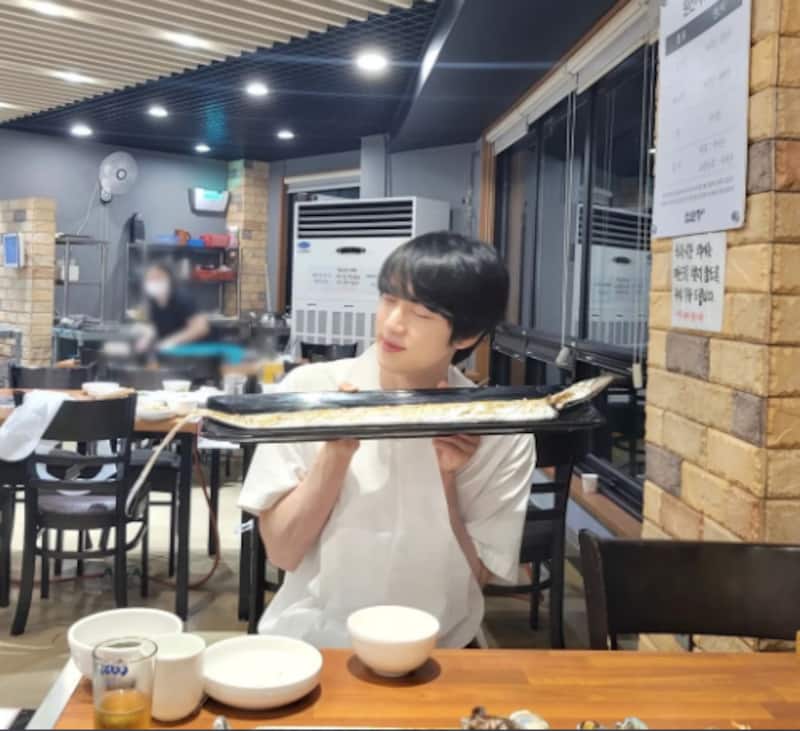 BTS member Kim Seokjin aka Jin created total ruckus on social media yesterday. The vocalist flaunted his friendship tattoo by posing shirtless. BTS ARMY went into a frenzy as Kim Seokjin is known to be a shy person. Jin stans could not control themselves on social media, and there was utter chaos after that thirst trap. After flaunting his hot avatar, Kim Seokjin aka Jin has gone back to being adorable. From pics at the pic to posing against the gorgeous beaches of Jeju Island, he is winning us over. It is a known fact that Jin aka Kim Seokjin loves to eat. Also Read - Imlie: Fahmaan Khan-Sumbul Touqeer look radiant as they meet producer Gul Khan; will the couple be retained for season two?

His recent pic was of his eating what looked like a long roll. Fans were confused with what was the dish. Korean ARMY informed others that it was a Galchi which in English is a hairtail fish. It is one of the longest fishes found in Asia and is loved by Koreans. In India, it is called Karli Fish. Some desi BTS fans confused it with dosa. Just check out some of the funny tweets here... Also Read - Prabhas Vs Hrithik Roshan: Saalar to clash with Fighter at the box office

WHY DID I THOUGHT THAT WAS DOSA

Not all the desis thinking it's a dosa I thought so too at first glance and almost scremaed ??? pic.twitter.com/rQTCAfmBKC

WHY DID I THOUGHT THAT WAS DOSA

where did he get masala dosa from?

In the pic, we can see him with a cute smile on his face. He is wearing a white and looks like he had booked the whole place for himself. Take a look at the picture... Also Read - Laal Singh Chaddha: Aamir Khan to REFUND money to the distributors for box office loss? Rajinikanth, Shah Rukh Khan and more stars who did the same

His adorable look made fans wonder if he was the same guy who dropped that hot shirtless moment out of nowhere. ICYMI, his pic literally summoned the whole hyung line of BTS who were wondering what's wrong with the eldest brother of the Bangtan Boys.

WHY ARE U WEARING SHIRTS ? TAKE THEM OFF SIR-

look at him being all cute like he did not cause any chaos yesterday ??

Can you believe this man cause chaos yesterday ????

Baby seokjinnie have come back from being wild kim seokjin ?

BTS aka Bangtan Boys is on a break from group activities. They are focused on solo albums and are evaluating how to take the band forrward from now on.