BTS, Miley, Kourtney, Sarah Jessica Parker and more. It's time to have a dekko at the Hollywood Newsmakers of the day here

Hola folks, it's time to walk you through the top Hollywood entertainment newsmakers of the day. Showbiz is the busiest industry ever, there's constant hustle-bustle, scandals, announcements, and more doling out throughout the day. So, without further ado, let's have a dekko at the Hollywood Newsmakers of 21 October 2021.

Yesterday, BTS came live on the VLIVE app. They were working on their upcoming concert in LA, Permission To Dance on Stage and decided to give a surprise to the ARMY. It was basically a pre-concert live in which they vaguely dropped hints about what they were going to do while at the concert. From special guest appearances to the songs, venues, TMI and more.

Check it out here: From surprise guests to the '13th song': BTS members dish out Permission To Dance concert SPOILERS for ARMY!

Travis Scott who is expecting his second child with Kylie Jenner was seen bonding with his firstborn, Stormi. A picture of Travis spending some quality time with Stormi in a pumpkin patch is going viral on social media.

Kourtney and Travis Barker gush over each other

A couple of hours ago, Travis Barker shared pictures of his engagement with Kourtney Kardashian on his gram. Kourtney could stop gushing over the moment. "My favorite person in the world, my fiancé," Kourtney comment on the post which he had captioned, "My fiancé." 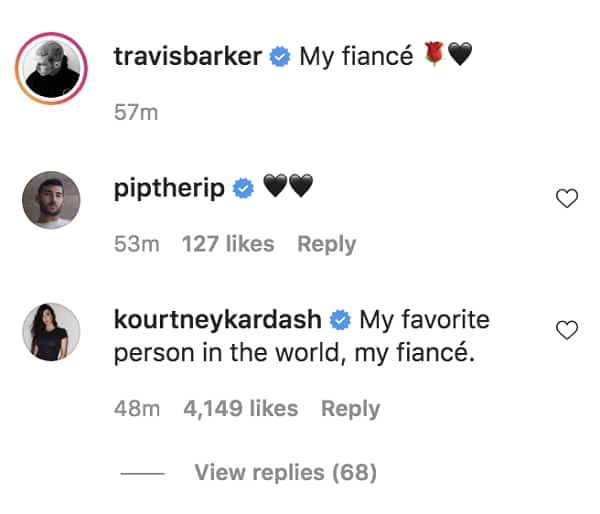 Sex In The City star Sarah dons a lehenga choli

Sarah Jessica Parker was seen shooting for a series called Just And Just Like That in a lehenga choli. You read that right. The Sex and the City starlet was seen wearing a fuschia pink and blue chequered pattern blouse with a matching lehenga. The lehenga is designed by none other than Indian designer Falguni Shane Peacock. The pictures went viral in no time. Check them out here below:

Miley Cyrus claps back at claims of sounding like a man

A certain change in Miley Cyrus' vocals has been observed by a few. Some have criticised her singing and vocals. But if you thought that would bog her down, then you are wrong. Over the last year, Miley revealed that her voice has changed. "Over the last year, I noticed a really big change in my voice. Kind of a heaviness to it. And I experienced some heavy things and so I feel like it is a reflection, it is kind of a scar in a sense," she said, reported Eoline. In 2019, Miley had undergone vocal chord surgery. She revealed her doctor called it an abuse of the voice. Miley stated that she has been working since her pre-teen days and hence her voice has been overused.

Jamie Lee Curtis' daughter Ruby has come out as a transgender. The actress revealed the emotional moment when she opened up about her real self. She opened up in conversation with People magazine about the same. She also shared a post about it. "Helping others Is something everyone should do. I don't think it's only our household thing. It should be a human thing." Ruby I am proud to be your mother. Today more than ever," she wrote in the caption. Check it out below: