Neither Jennifer Lopez nor Ariana Grande, Indian BTS ARMY wants the septet to collaborate with THIS pop artist next – view poll result

It's time to declare the results of which pop artist does ARMY want BTS to collaborate with next. We had conducted a poll and asked ARMY to pick from Jennifer Lopez, Selena Gomez, Justin Beiber, Ariana Grande and Armaan Malik.

BTS is shining across the globe and ARMY is busy enjoying and proudly stanning their idols and their music across social media. However, today, we would be talking about one of the polls that we had conducted a couple of days ago. In the poll, we had asked about who the Army wishes to see BTS collaborate next with. And Indian BTS ARMY has registered their responses. For those not in the know, we had asked ARMY to pick from pop music artists, Jennifer Lopez, Selena Gomez, Justin Beiber, Ariana Grande and Armaan Malik, as BTS next collaboration artists. And ARMY has picked none other than top Indian pop artist Armaan Malik. Yes, you read that right. Also Read - MTV Video Music Awards: BTS land five nominations for Butter and Dynamite; Justin Bieber and Megan Thee Stallion also score big

Talking about the votes, about 38% picked Armaan Malik. The next in line is Selena Gomez with 26% of votes. Justin Bieber, who is now a part of HYBE, got about 20% votes. Ariana Grande grabbed the 4th spot with 14% votes in the poll. Jennifer Lopez, however, earned the lowest votes, that is, about 2%. Check out the poll result here: Also Read - Trending OTT News Today: Leonardo DiCaprio and Jennifer Lawrence's Don't Look Up teaser is quality personified, Riz Ahmed and Octavia Spencer's Encounter teaser looks like sci-fi gold and more 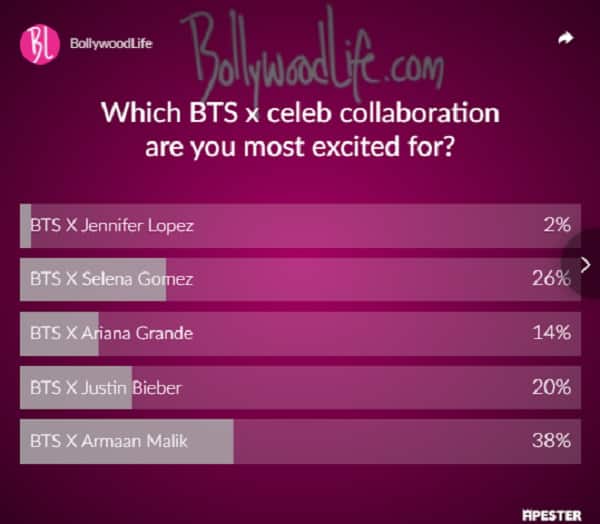 Also Read - Indian BTS ARMY are you listening? Armaan Malik is game for a collaboration with Bangtan Boys

Meanwhile, just yesterday, Big Hit Music had dropped a statement confirming that three-times Grammy award-winner Meghan Thee Stallion would be remixing BTS' second all-English and chartbuster hit single, Butter. The song, Butter (BTS Ft. Meghan Thee Stallion), will drop on 27th August 2021 at 1 PM KST, that is, 9:00 AM IST on Friday. BTS are also rumoured to be collaborating with Selena Gomez. It so happened that ARMY recently discovered that the pop music sensation had started following BTS, resulting in the collaboration rumours. On the other hand, JLo recently dropped a remix version of Permission To Dance that gave ARMY Spanish vibes from the music.