BTS ARMY has given their VERDICT! Wants THIS member to be their study partner – view poll results

The study with BTS segment had given us the idea to conduct a poll asking which of the BTS members do they want as their study partners. And today, we are declaring the results of the same. BTS ARMY has picked their study partner.

Hey, BTS ARMY, so much happened in the last two days, right? BTS X Coldplay's collaboration My Universe's teaser was released, the septet got felicitated by the South Korean President Moon Jae-in wherein they received the certificate as the President's special envoys and were given the Republic of Korea diplomatic passport, RM's birthday live, BTS winning big at the MTV VMAs, new Run BTS episode and whatnot. BTS has always kept the ARMY on their toes with so much content to consume apart from their music. Also Read - BTS: Fans can't wait for 'Actor Jin' as Mission Impossible and Star Wars actor Simon Pegg wishes to do Netflix's Squid Game season 2 with Kim Seokjin; Bring it on!

Just the other day, we saw BTS studying with the ARMY who had exams, tests. The boys are constantly thinking about the ARMY and their well-being. And that gave us the idea to conduct a poll on who they would want as their study partner from RM (Kim Namjoon), Jin (Kim Seokjin), Suga (Min Yoongi), J-Hope (Jung Hoseok), Jimin (Park Jimin), V (Kim Taehyung) and Jungkook (Jeon Jungkook). And boy, oh, boy, the BTS ARMY has picked their study partner. Also Read - BTS ARMY, V aka Kim Taehyung's prince avatar will leave you swooning – check out irresistible pictures

As per our poll results, a thumping majority of fans want the Sweet Night singer, V, to be their study partner. He has received 29% of the votes. Next is, the leader of BTS, RM who has received 23% of the votes. After V and RM, is Jungkook who has grabbed the third spot with 20% of the votes. Also Read - BTS: Chris Martin calls THIS Bangtan boy's voice perfect in My Universe; Courtney Cox agrees with him

The Filter singer, Jimin has received 13% of the votes in our study partner poll. On the other hand, Suga got 6%, Jin got 5% and J-Hope got 4% of the votes. Check out the poll result here: 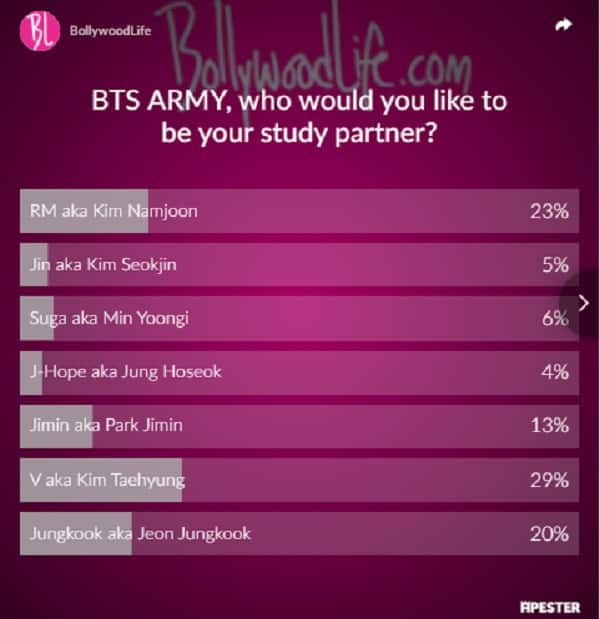 Meanwhile, BTS is gearing up for their overseas appearances. The BTS septet and also the staff members have been fully vaccinated. They now no longer have to quarantine themselves for two weeks every time. It seems Hybe aka Big Hit Entertainment has planned an overseas schedule of BTS. Well, everything about BTS just gets exciting evermore.