BTS: Is SUGA like Nostradamus? Check out all the times his predictions came true, including Butter ruling the roost on Billboards Hot 100

Know how we told you that BTS' Suga was the one to predict that Butter would stay on top for weeks? And Yoongi's prediction was bang on. Let's check out a couple more times when Suga predicted the future and it came true.

Bangtan Sonyeodan aka BTS's latest music single, Butter has topped the Billboards Hot 100 chart for the 6th consecutive time. The boys and the army is super happy. The septet is feeling all jittery and are surprised to see Butter topping the charts six times in a row. RM aka Kim Namjoon, Suga aka Min Yoongi, J-Hope aka Jung Hoseok had already shared their excitement about the same. Even Jungkook who is not much active on Weverse these days thanked fans for their love. Well, know how we told you that Suga was the one to predict that Butter would stay on top for weeks? And Yoongi's prediction was bang on. Let's check out a couple more times when Suga predicted the future and it came true. Also Read - 'BTS Gay' trends on Twitter after the septet share memories from 2020; ARMY stand strongly in support of them

In 2016, when Suga dropped his mixtape Agust D, a line from the lyrics said, 'Next up is the Billboard." And guess what? Less than a year after that, BTS boys were invited to attend the Billboards Music Awards. Also Read - BTS members REVEAL if they eat McDonald’s and RM's reaction is relatable AF for all food lovers

At the press conference of their third studio album Love Yourself: Tear, Suga was asked whether they would debut at the top with it. Yoongi had said that they definitely want to be there however, the feeling was unreal. "We heard the anticipation about No.1 on the Billboard 200 Chart but it doesn’t feel real. Of course, we would like to reach No.1 but we don’t want to be attached to the rank," he had said. Also Read - BTS' Suga once REVEALED what role he would play in a movie and it will leave the ARMY in tears of laughter 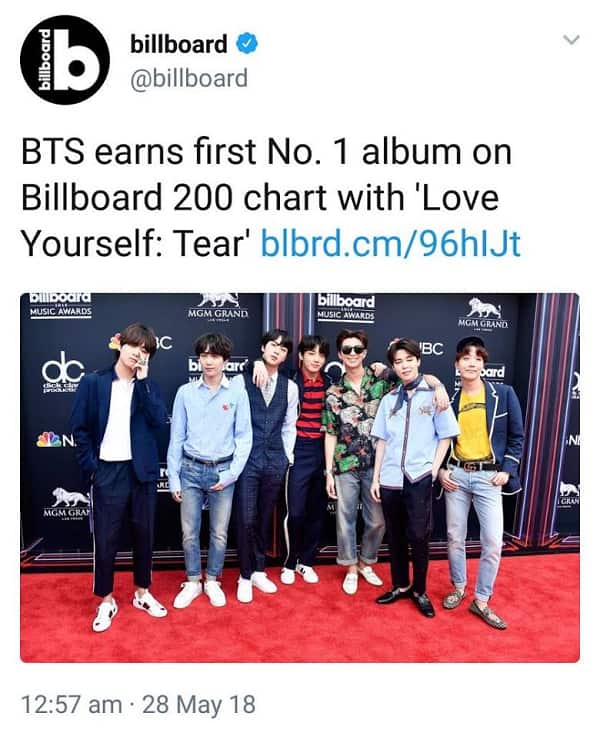 In their interview with Liam McEwan, Suga was asked what's next for BTS and the Daechwita hitmakers said, "We want to perform in Billboard Music Awards." And in 2018, BTS debuted on stage with Love Yourself: Tear.

During the press conference of Love Yourself: Tear, Suga had also said that he wanted BTS to become the "most influential artist in the world" and in 2020, BTS featured on Time Magazine's cover as the Next Generation Leaders.

Finally got my copy of @BTS_twt @TIME Magazine Cover? i bought this from BookSale, & the guy said to me that it just a limited ed. In there store, they just received 4 copy and i bought 1 copy right a way even though i already reserve fr. nbs?✌??#NextGenerationLeaders #BTS pic.twitter.com/Yu071B3VOm

Years ago, at their second-anniversary celebration, Jin aka Kim Seokjin had asked Suga if he had a wish to which the latter had replied saying, "I really want to perform at a bigger venue like the Seoul Olympic Stadium." Years later BTS did perform at the stadium.

Suga has spoken about attending and winning Grammy multiple times. His wish came true when BTS performed with Lil Nas X on Old Town Road in 2020. Have a dekko at their performance below:

He now wishes ARMY passes the baton of topping Billboard chart to Permission to Dance, their second collaboration with Ed Sheeran. The song will all set to release on 9th July. Also, a Grammy win, next year would be nice too, don't you think?