A couple of days ago, we had asked y'all, ARMY, as to which BTS members' solo songs do you love more. And guess what? It's time to give out the verdict.

BTS is going places, and ARMY cannot be more proud of the septet. The boys have been ruling the music industry with their amazing all-English singles despite it not being their first language. They have broken several stereotypes and have paved the way for themselves amidst all the criticisms. They have been taking challenges head-on and have been tackling them all together as a group. Each of them has grown so much since their debut that you'd be surprised with their graph. Yes, they are OT7, but their individuality is striking and too hard to ignore. BTS shine the best together, but it is also so hard to ignore their uniqueness. Still, there are biases as well, right? And this brings us to the BTS poll that we had conducted a couple of days ago. Also Read - ARMY trends 'RESPECT BTS PRIVACY' after fans track flights of Bangtan Boys and crowd the airport area

We had asked y'all, ARMY, as to whose solo songs do you love more. And guess what? It's time to give out the verdict. ARMY has picked none other than the Golden Maknae of BTS, Jeon Jungkook, as their most favourite. The Euphoria singer, Jungkook, has earned 28% votes out and is leading the poll. Following him is the Winter Bear singer V aka Kim Taehyung. He secured about 24% votes. With 19% votes, taking third place is the Filter crooner, Park Jimin aka Jimin. Also Read - BTS' V aka Kim Taehyung and pooch Tannie's pictures scream 'like father-like son' – view PAWWDORABLE proof

Worldwide Handsome Jin, aka Kim Seokjin, got 11% votes for his amazing vocal abilities. The rap line is next with Suga, aka Min Yoongi, topping up with 9% votes, followed by RM, aka Kim Namjoon, with 5% and JHope, aka Jung Hoseok, with 4%. Check out the poll result here: Also Read - BTS leave for NYC and ARMY cannot keep calm as Kim Taehyung turns airport into his runway again; trend 'Fashion Icon V' – view tweets 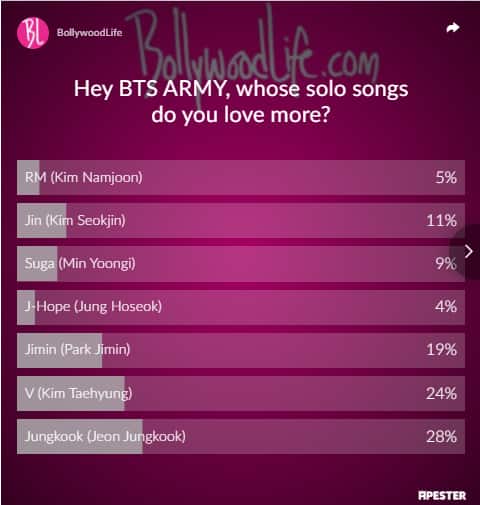 Meanwhile, BTS recently grabbed headlines for their interview with Billboard. ARMY had bashed the publication for asking BTS' leader, RM, whether ARMY is manipulating the charts. ARMY demanded an apology for the same.